Qiantu K20 Is A Cool Electric Sports Car From China 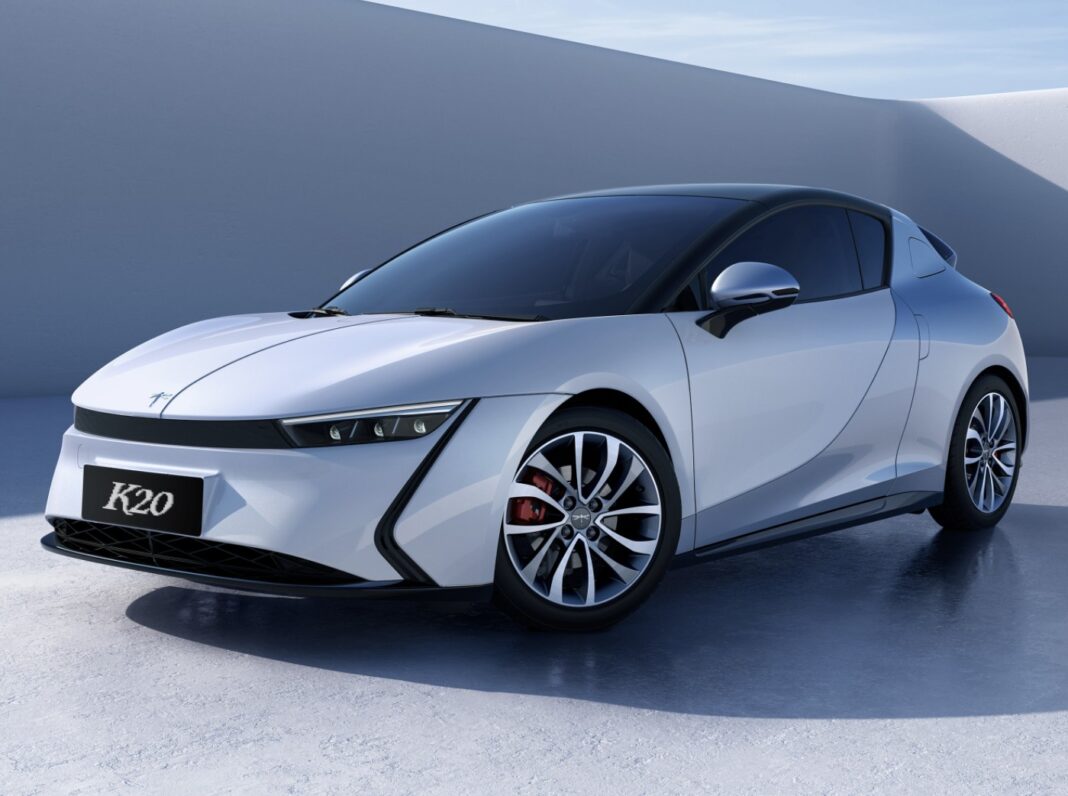 This is the new Qiantu K20, a new two-seat electric sports car from China. It is a great looking machine with a long bonnet, a steeply sloped windshield, and large alloy wheels with racy red brake calipers. Pre-sale pricing ranges from 86.800-149.800 yuan (13.045-22.510 USD), with deliveries scheduled to begin in Q4.

The Qiantu K20 is made by a company called Qiantu Motors, best known for their Qiantu K50 electric super car. The K50 first launched on the Chinese car market back in 2018. In 2019 sales were suspended to somewhat misty corporate restructurings, but a few months ago the K50 was relaunched with a slightly updated design. Power comes from two electric motors, one over the front axle and one over the rear axle. Output is 435 hp and 680 Nm, for a limited top speed of 200 km/h and a 0-100 in 4.6 seconds. Range is 380 kilometers. Price starts at 754.300 yuan (113.250 USD).

The K20 is the second car under the Qiantu brand. We first met the K20 as a concept in 2018. It was a great looking little thing, it gave me Smart Roadster vibes and it had a drone helicopter in the back.

The K20 returned as an updated concept car in 2019. It looked much more production ready than the 2018 concept, with realistic lights and mirrors. Sadly, nothing came of it.

In 2019, Qiantu Motors also showed a four door version called the K25. It had suicide rear doors but looked pretty far from production.

But now, the K20 is finally happening. Basic design is remarkable similar to the 2019 concept but details differ. Most notable are the door handles that moved from the door itself to a position just behind the door. The flying buttress design of the rear is basically unchanged too. The light bar runs over the full width of the car with ‘Qiantu Motors’ lettering in the middle.

Inside, is compact size of the K20 is most visible by the narrow center tunnel, the seats are very close to one another. The steering wheel looks sporty with a flat bottom and the Qiantu logo in the center. The driver-focused screen is compromised of three parts, the drive selector is on a stalk behind the wheel.

The door design is super clean, with small pods for the window controls and gold detailing, which also comes back on the dashboard and seats.

Qiantu hasn’t disclosed any details on the power train yet, but they have said it does 0-100 in 4.7 seconds. The K20 has a twin motor setup, with a total output of 217 hp. The battery pack is located under the floor between the axles, range is 500 kilometers.

The K20 doesn’t seem to any sensors so we don’t expect too much about advanced driver assistance systems. But the K20’s character is more about sports I guess; the driving position seems great with a low center hood and high fenders on the side, in classic sports car style.

Qiantu Motors unveiled the colors of the K20. One is yet a secret. A secret color! Can’t say I am not excited about that. The other colors are pretty much standard fare, but it is odd that Qiantu doesn’t do more with two-tone coloring, considering the design of the K20. They got green and dark green, purple and dark purple, but not something like red-white or green-gray. Or perhaps that’s the secret color…

This is the one seen on the upper-right on the color sheet. The color is called Xiangbiaobai (想表白), best translated as ‘think about explain oneself’. Poetic color names are very cool at the moment in China. And they did a nice little job there because ‘bai’ also means white.

This image seems to suggest the Qiantu K20 has a drift mode, which would be very cool. It is great to see another Chinese electric sports car after the Leap Motor S01. It doesn’t have so much power, especially for a twin-motor car, but 217 hp is way more usable in everyday conditions than another 1000 hp ‘hypercar’. And for only 86.800 yuan, this Qiantu seems a steal.