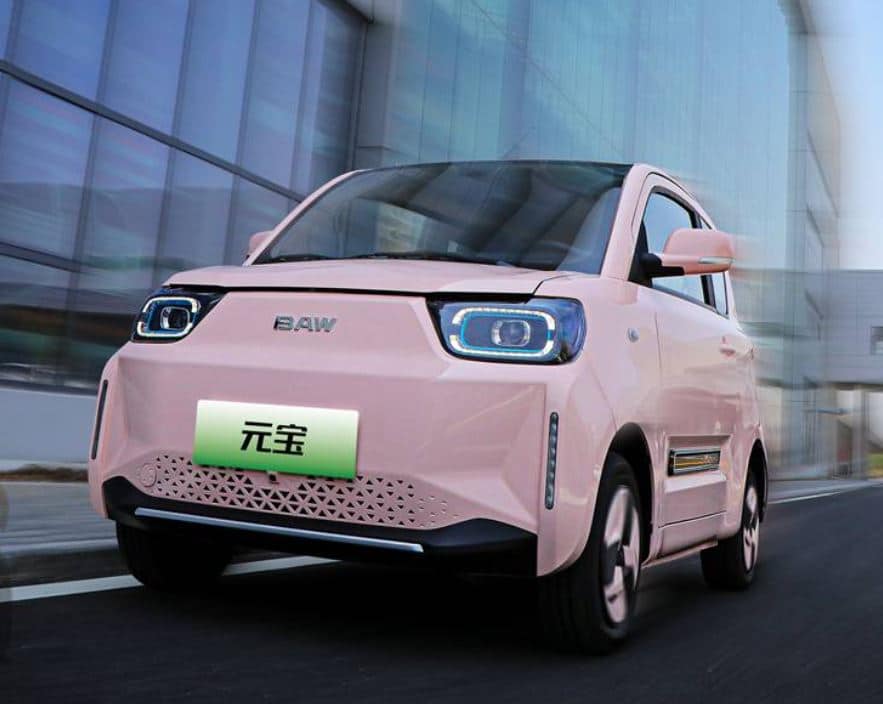 On June 28, BAW officially launched the Yuanbao (formerly named the S3), an electric mini car, while celebrating its 71st anniversary. The car comes in four versions with two cruising ranges. The price range for the 120km and 170km range models is 33,900-49,900 RMB (5,060-7,400 USD). The BAW Yuanbao is a three-door four-seat mini car, set to compete with the Wuling Hongguang MINI EV and Chery QQ Ice Cream. Like many of these cars, the BAW Yuanbao is targeted toward women, hence to funky pink color scheme.

BAW, short for Beijing Auto Works, is now a stand-alone company and no longer part of the Beijing Auto Industry Corporation (BAIC). This allows BAW to stray away from just making old 4x4s and move into new territories. As a part of the separation deal, the company can no longer use the ‘Beijing’ brand name or the BJ designation. Instead, they use the BAW name (BAW used to be the company name, with Beijing as the brand name). The Chinese name for BAW is 北汽制造 (Běiqì Zhìzào).

The BAW Yuanbao looks cute with its small square box body shape, round rectangular headlights, and the closed grille design in the front, making it highly recognizable. The size of the car is 3162/1498/1585mm with a 2050mm wheelbase and is equipped with 155/65 R13 tires + steel rims with wheel covers.

In Chinese culture, “Yuanbao” means sycee, a type of gold and silver ingot currency used in imperial China. Today, sycee symbolizes wealth and strength. BAW named the vehicle Yuanbao to wish the vehicle owners lots of good fortune coming their way. The BAW Yuanbao will arrive at more than 500 BAW stores across China in the near future, according to BAW.

BAW is also working on a larger four-door version of the Yuanbao.

From the side, the BAW branding is on the C-pillar. The black window section creates a stark contrast to the pink body.

The interior comes with a high-end twin 10.25-inch floating screen. One screen is for the instrument panel and the other one is for the infotainment.

In terms of safety, the BAW Yuanbao has a 360 degrees surround camera system, radars in the front and rear of the vehicle for parking, an anti-lock braking system, an electronic brakeforce distribution system, and hill-start assist function. The car also uses normal disc brakes up front but drum brakes at the rear. This is an increasingly common brake arrangement for electric cars. However, only the two high-end BAW Yuanbao models are equipped with airbags.

The BAW Yuanbao is powered by a 20kW (27hp) electric motor with a peak torque of 85Nm and a top speed of 100km/h, exactly the same number as the Wuling and Chery QQ Ice Cream. The car is rear-wheel drive and comes with two lithium-ion battery pack options: 9.6kWh and 13.6kWh, with a cruising range of 120km and 170km, respectively.