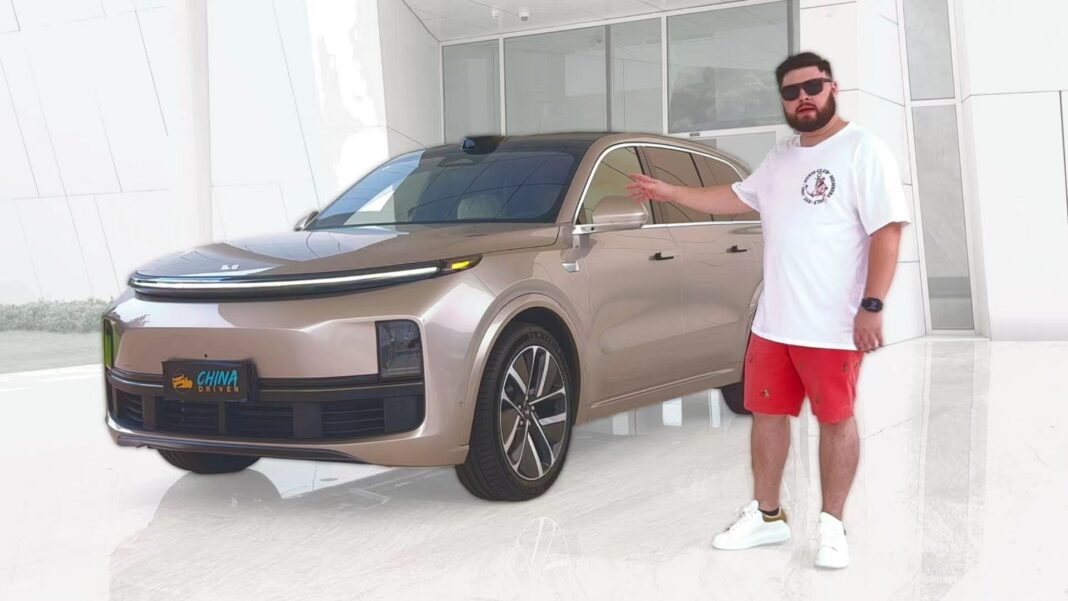 The Li Auto ONE has been nothing less than a sales success amongst the numerous Chinese NEV start-ups. Where NIO, Xpeng & others have been delivering over 10,000 units a month, Li Auto hit that milestone first with a single model. Now the company is following up with the Li Auto L9, it’s larger full-size, premium flagship vehicle, promising to be more feature packed & luxurious than the ONE.

Just like the Li Auto ONE the L9 will be available as a single trim option, everything standard for a single price of just under $75,000 with the exception of three optional paint colours & some accessory options, like automatic running boards. Benchmarked against the Mercedes GLS & BMW X7 which carry heavy import duty taxes in China, the Li L9 aims to offer similar or better levels of luxury & features at half the price.

The Li ONE‘s large, in your face grille, has given way to a much smoother front end in the Li L9, with the new 1.5L 4-cylinder turbo engine’s active cooling being pushed lower down in the front fascia. The L9’s front is dominated by the single piece Halo light that stretches 2 metres across the bottom of the bonnet, uninterrupted. With a crevice between the bottom of the Halo light and the smooth upper portion of the front end, the L9 achieves a far cleaner, minimalistic EV-ish look. BUT the company are not trying to hide the fact that the L9 like the Li ONE is still an EREV.

With a 44.5kWh CATL NCM622 battery the Li L9 has a claimed pure EV range of 180km. Once the engine kicks in to generate the electricity the full claimed combined range is a staggering 1100km, and these ranges are in the more realistic WTLC standard. This new extended range EV can go further than the ONE in both pure EV & combined mode. And just like the ONE, there’s no gearbox or driveshafts, the “electrical generator” aka the engine, powers the motors directly meaning the instantaneous torque associated with electrical motors is always present.

The side of the Li L9 is unburdened by unnecessary creases or lines, the only shape you’ll find is that which surrounds some of the side collision bars. The chrome framing around the large windows with the straight belt line is very familiar from the Li ONE. The biggest change styling wise down the side from the ONE is the introduction of pop-out handles. Which have 8nm of force to punch through ice in the event they are frozen over. Soft-closing doors are also standard on the L9, an expensive accessory upgrade on the Li ONE.

The rear sees the halo light return stretching across the back in a single beam of light. The rear windscreen seems to occupy half of the rear tailgate giving plenty of rearward view & light into the third row. Personally, I hate the current trend of removing rear window wipers in an effort to produce a cleaner rear end look, the L9 let’s you have your cake and eat it, tucked up out of sight, in a hollowed out area of the rear spoiler, is a rear window wiper. In an effort to improve loading in tight spaces the sensor for the induction tailgate has been moved from under the rear bumper to behind the wheel on the drivers side.

Li Auto say, trying to dodge the tailgate with your back against the wall in a parking lot is not ideal, so the new sensor location makes a lot of sense. With a press of a button the car will drop it’s air suspension 5cm on its rear axel to aid lifting heavy loads into the back. You can individually electronically drop and raise the third row seats and the system will automatically move the second row seats out of the way to make the whole process easier.

In the driver’s seat you are met with a 13.35 inch colour animated HUD which displays ADAS functions & perception as well as speed & navigation. While a small 4.85inch mini-LED screen on the steering wheel deals with trip info, consumption stats, fuel & battery levels, with the ability to toggle between pure EV mode & hybrid mode. These replace a traditional instrument panel and together display all driver information. The other two screens up front are 15.7inch 3k Samsung OLED displays, running two Snapdragon 8155 processors. They are super responsive, crisp & intuitive. They have swipe on and off screen gestures like an iPad Pro & a dock system. You can customise the layout by simply pressing and holding a widget window before moving it into a new position, again very iOS like. To ensure great internet coverage at all times the Li L9 has two 5G sims, one from each of the major provider, a nice small touch.

The Li L9 has gesture control, utilising time of flight cameras in the first & second row. But unlike other gesture control systems, it’s combined with the AI voice assistant, giving a much better experience than other implementations of this tech. Instead of remembering long strings of voice commands all you need to do is point to a window and say “open this” or “close this” and the car will abide. The depths of its usage I haven’t delved into, but I hope to have a Li L9 for a longer loan period to really see just how much you can control with this gesture voice combination.

The interior is covered in leather, although if you dig deep down you’ll find some less pleasing materials but this is by far a much more plush interior compared to the Li ONE. The six seats are full nappa leather, with the first & second row seats having ventilation, heat & 10 point SPA massage function. Even the third row seats have heating and a reclining function, as well as being much softer than in the Li ONE.

In the second row you’ll find the two captain seats similar to the Li ONE, although they are bigger and more comfortable. The passenger side seat has electronic calf support and easy access buttons to push the front passenger seat forwards. There’s also a tray table on this side capable of supporting 25kg of weight. Back here there is an addition of a fridge which will keep things cool between 0-7oC and surprisingly it is also capable of keeping things warm between 35-50oC. Once you lock the car the fridge/warmer will keep temperature for up to 24hours which is impressive.

Rear entertainment in the Li L9 is fantastic. A big bugbear of the Li ONE was the inability for most rear passengers to see the entertainment screen, which was in front of the 1st row passenger. Now there is another 15.7inch 3K Samsung OLED touchscreen. In the rear it flips down from the ceiling and is in a 16:9 ratio perfect for movies. And you better believe it’s great for movies! Apart from the super clear display the Li L9 has the latest Dolby Atmos 7.3.4 spatial audio. With a 2160W, 21 speaker system, sound passes around you AND over head, creating a truly immersive experience. If that isn’t enough to engross you, the seats have tiny little motors that vibrate when something “hits” or “explodes” near you. It’s something you have to experience yourself to do the system justice, just rest assured it’s like nothing you’ve ever experienced in a car.

There’s the obligatory KTV mode with the cars Bluetooth mics allowing up to four people to screech along to their favourite songs. One small saving grace is that the driver can be listening to their own music on the sound system whilst the front passenger uses BT headphones for their entertainment & the rear passengers use BT headphones for their separate entertainment. You can also hook up a Switch or a PlayStation using the Display Port and the 1.1kW outlet inside the car. That screen is also controllable via gesture control, and on first attempt I was successful, however it’s easy enough to reach & I think realistically most people will be using it as a touchscreen.

Li L9’s ADAS system is named AD-Max and it utilises multiple sensors when providing its ADAS features. With six 8MP cameras & five 2MP camera the ADAS system works with the theory of vision first. But for redundancy in conditions where vision maybe impaired the Li L9 will be able to rely on its Hesai 128-line, hybrid lidar. Admittedly it does stick out of the roof like a London black taxi. Other sensors include a radar hidden behind the front fascia & 12 ultrasonic radar surrounding the car. The AD-Max system is using two Nvidia Orin-X GPUs to deliver 508TOPs of processing power which is a huge processing upgrade over the Li ONE’s 20TOPs. On the side of the Halo light what appear to be USA regulatory side reflectors are actually lights, which turn a teal colour to denote the car is operating in some form of ADAS function. Li Auto have been in discussion with the Chinese government who wish to have new cars signal to other road users when they are in ADAS mode. At the moment regulations are only for auto parking features, but Li Auto say they are ready, when and if the government decides to extend these rules.

We weren’t able to drive the car on this media event, although it seems like media drives will happen in the near future. However the Li L9 comes with 330kW & 620Nm (449HP & 457ft-lb), allowing it to dash from 0-100kph in 5.3s, a second faster than a Mercedes GLS 450 4matic. Suspension wise the Li L9 has double wishbone in the front and 5-link independent suspension in the rear, whilst riding on air suspension with CDC as standard. I’ll hold judgment on comfort and drivability until we get behind the wheel.

The CEO claims the Li L9 is the best family car under $750,000US, and some might dispute that claim. But with the Li L9 costing less than $75,000US, it is a lot harder to argue it’s not the best family car on the Chinese domestic market, under that price point. Remember a BMW X7 in China starts at $150,000US, so this looks like a comparative bargain!

L9 video review from ChinaDriven Will