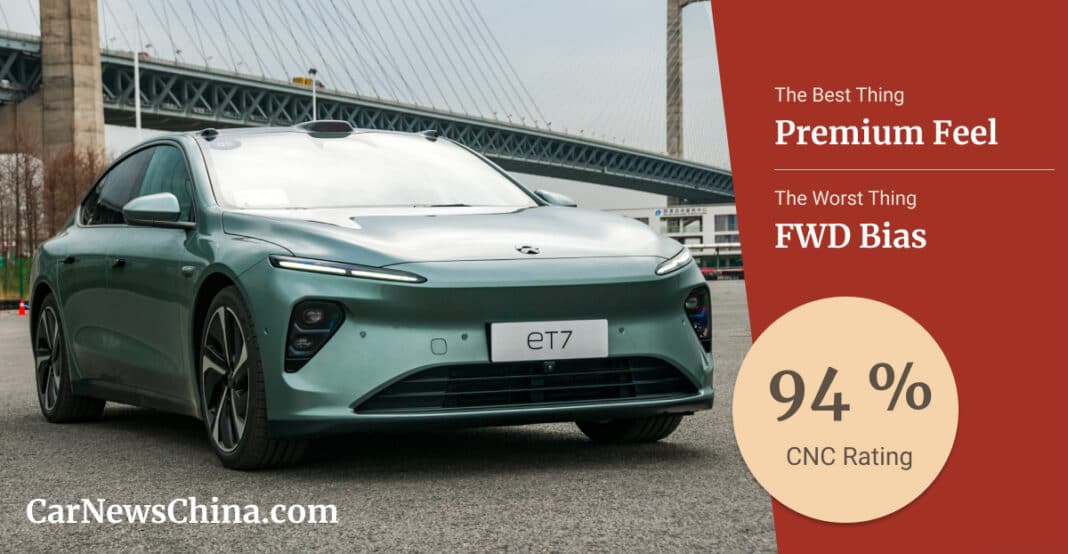 Deliveries of Nio’s new ET7 begin to lucky customers from late March, and we have already had a sneak preview of what the car is like. This car changes Nio from the company it is today to the company it is tomorrow, and its importance cannot be overstated.

Nio is probably the best known of the three leading Chinese start-ups, the others being XPeng and Li Auto. Up to now, Nio has only produced SUVs and is well known for its battery swapping. The brand launched in Norway last year, and at the 2021 Nio Day announced plans to be on sale in 25 markets by the end of 2025.

While Nio launched in Norway with the existing ES8 model, all new markets will only get the second-generation models. Leading that push is the ET7, the first of three cars to go on sale this year on the new platform.

What’s the big deal about the new platform? First off, it is not just about dynamic improvements; it allows for much better driving assistance capabilities than the first generation. The ET7 is the first Nio car to feature Lidar. XPeng generally has a better reputation when it comes to driving assistance, but I was pleasantly surprised by the ability of the ES6 when I test drove one last year. It was able to undertake lane changes on the highway by itself, which I had not expected. The ET7, using Lidar, will take this to the next level. Unfortunately, as with Chinese cars on launch, these features are not yet operational, so testing them will need to wait for another time.

Unlike the Weltmeister M7, which has wart-like protrusions all over, Nio has done an excellent job integrating the sensors. The most prominent is just above the windscreen, which houses the Lidar sensor flanked on either side by 8-megapixel high-resolution cameras in what Nio refers to as the Watchtower sensor layout. The ET7 has a remarkably slippery 0.208 drag coefficient despite these slight bumps. And if there is one word that best sums up the exterior design, it is sleek. But it’s not just about aerodynamics; the finished result is a genuinely good-looking car.

Looking at pictures, it is easy to think the interior of the ET7 is just like any other Nio. Indeed the setup is very familiar, albeit more minimalistic however the materials and overall quality are a huge step up. That’s not to say they’re bad on older Nio models, but on my test day, I rode in an ES8, and you could certainly feel the difference. On the ET7, the tactile experience raises the bar and is more than a match for the German trio. Rattan inserts find their first application on a production car. Not only are they more environmentally friendly, thanks to being renewable, but they have a charming textured feel. These cover huge swathes of the front and back, notably on the center console, dashboard dividing line, and electric window buttons.

Although Nio offers a vegan leather seat trim, my test car came with Nappa leather. According to Nio, they use up to forty percent more than other brands and use it not just on the visible seat parts but also on inserts and the steering wheel. Coupled with microfiber headlining, it adds up to a very comfortable environment. There is no glove box on the ET7, but there’s plenty of space under the floating center console like other Nio cars. One unusual feature is the cubby hole on the center console. This can act as a safe with access either by facial recognition or inputting a code, and also, rather than a more normal rear-hinged opening can open to either side. Inside are two USB ports, including the only Type A in the whole car, along with a 12V outlet.

Thanks to the panoramic roof, the back is very light and airy, and despite a fairly raked roofline, headspace should be acceptable for all but the tallest passengers. Nio makes a big deal of benchmarking the ET7 against the long-wheelbase 5 series, and indeed legroom is a good plus; without a raised center tunnel, the middle passenger has more comfortable seating. Rear passengers get an LCD panel mounted on the back of the center console to control climate and seat functions. Underneath is a Type C USB outlet, and another is in the compartment of the fold-down armrest. Like the front seats, outer passengers in the rear get heating, cooling, and massage functions. The ET7 doesn’t have a drunk, but boot space is generous, and the hatch gets electric opening and closing.

Track driving gave the ability to test acceleration, braking, and handling. In Sport+ mode, the quoted acceleration time is 3.8 seconds, but Nio is keen to point out that this is based on the car being half-loaded, and with just a driver, it should be faster still. With the stronger (300kW 500Nm) of the two electric motors at the back, the ET7 noticeably pitches up when accelerating hard. Once at 100km/h, the car needs 33.5 meters to bring it to a standstill when the brakes are fully applied. This is most appreciable when doing an elk test here. The car has often come to a standstill before the zig-zag maneuver is complete. There is no doubt the ET7 is large, but it’s surprisingly nimble when doing a slalom and body roll, thanks to the air suspension is not an issue.

Currently, there are four drive modes in addition to Sport+, there being a Sport, Comfort, and Eco setting. There is also a Custom option to pick and mix the settings for acceleration, regenerative braking, ride height, suspension stiffness, steering weight, and air conditioning. Custom allows you to drop the acceleration figure right down to 12.9 seconds, where the car becomes only front-wheel drive, which perhaps reveals the car’s biggest problem. Unlike the Zeekr 001 and XPeng P7, which have an RWD bias in their AWD versions, the ET7 usually uses the front wheels (180kW 350Nm) for power except under heavy acceleration when traction on all four wheels is required.

In Comfort, the acceleration drops to 7.9 seconds which is fine for everyday driving, but in every mode bar Sport+, the steering is light. Perhaps it was just my driving, but for some reason, I managed to get the steering wheel wholly disorientated on two occasions, not something I usually experience. The top braking regeneration level gets labeled as Standard says a lot. The car doesn’t drop speed that quickly when you remove your foot from the accelerator, and true one-pedal driving is undoubtedly not possible as it will just go down to around an 8km/h coast.

Range depends on various factors such as mode, but the 21-inch tires on our test car reduce the maximum range of the 100kWh battery pack version from 705km to 615km. There is also a 75kWh pack available on launch. Later in the year, a 150kWh semi-solid state battery should be an option, giving a range of over 1000km. One thing to be noted is that Nio is now using the new China-only CLTC standard, which is even more generous than NEDC for range.

Thanks to the head-up display and proper instrument panel, situational awareness is good. Most things are controlled through the center screen. The car tested was a pre-production model with earlier software than models set for delivery. As such, it did not have an option for English which is meant to debut on the ET7; nonetheless, navigation and response times of the screen seem to be much better than with earlier Nio cars. It is also possible to control many functions through voice via Nio’s digital assistant Nomi.

Overall: With this car, Nio announces it is more than ready for Europe; the question is whether Europe is ready for Nio? Very impressive performance and a premium feel, full judgment has to be withheld until the full driving assistance suite can be tested. Is it the best EV from Nio so far? Definitely yes. Is it the world’s best EV up to date? That would be too bold a statement right now. But ET7 definitely shows Nio is on the right way to dominate the premium EV sector.

If this is still not enough for you, you can check the video review from Will