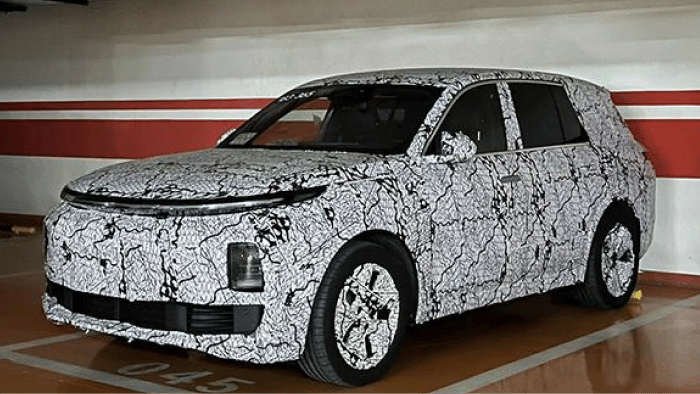 The Li Auto L8 (X02) is a large EREV SUV positioned between the Li Auto One and the Li Auto L9. Recently, Li Auto CEO Li Xiang shared some new information about the upcoming L8. According to him, there will be versions with 5 and 6 seats, and a LiDAR sensor. Moreover, spies were lucky to shoot the L8 in the car park. Let’s get to know the Li Auto L8 better.

Worth mentioning that previously we have known the Li Auto L8 under the ‘X02’ codename. We have seen it during road tests several times. Later, it was exposed in patent images. Its appearance stays in line with the Li Auto L9 with a few exceptions. The L8 got a shorter wheelbase and another D-pillar. Chinese media complain that its length will be around 5100 mm. As for the wheelbase, it will reach 3015 mm. For a quick comparison:

As mentioned, spies were lucky to shoot the Li Auto L8 in the car park. It is heavily covered in camouflage. Anyway, we can clearly see that it stays in line with the Li Auto L9. We can see the same LED running light unit, headlights, retractable door handles, side mirrors, and overall shape. As a result, the L8 can be easily confused with the L9. You can distinguish the Li Auto L8 only by its rear end. It has a slanted D-pillar and another rear bumper. We can also highlight that the L8 hasn’t got a LiDAR sensor on its roof. But, according to Li Auto CEO, there will be version with a LiDAR.

There are no fresh interior spy shots. Previously, we saw that the L8 got the same twin-screen as the L9. There will also be two screens for rear passengers mounted on the front seats.

Li Auto CEO Li Xiang detailed the L8’s versions. There will be the L8 with 5 and 6 seats. Both versions will have two trim levels called ‘Pro’ and ‘Max’. The L8 Max will be the top trim level with Nvidia Orin X chips, 8 cameras, and a LiDAR sensor on top of the roof. Its computing power will reach 508 TOPS. As for the L8 Pro, it will come with no LiDAR sensors and lower-tech chips. Speaking about the difference between the 5-seat and the 6-seat versions, Li Xiang mentioned that they are equal in terms of luxuriousness. He even compared the 5-seat L8 with the Bentley Bentayga.