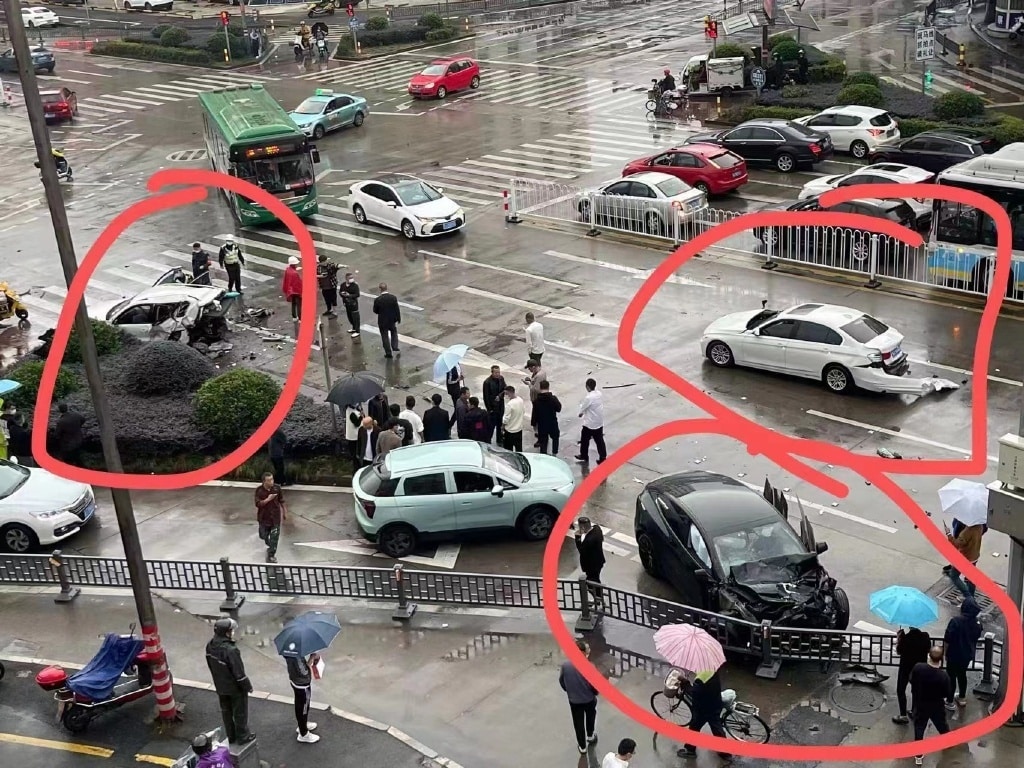 On November 28, a black Tesla Model Y in Taizhou, Zhejiang province, ran through a traffic light hitting two other cars. It stopped after running to the roadside guardrail, and all three cars in the incident were severely damaged. The driver who caused the accident was slightly injured, and his accident led to two deaths.

Events as per eyewitness

According to an eyewitness at the scene, while he was waiting for the green signal, the Tesla passed by him in a ‘swipe’ way, leading his vehicle to shake. After driving from there, he saw a collision at the next traffic light intersection. He added that when the car passed him, it would be doing at least a speed more than 100 km/hour.

At the time of the accident, road monitoring cameras and two nearby driving recorders took pictures of the accident. The road monitory camera shows that Tesla Model Y was traveling at a red light, and other vehicles in the same lane were waiting for the green light. Tesla rushed straight out from the left-turn lane, passed the intersection, continued forward, and rushed to the next traffic light intersection.

Damage caused by the accident

A vehicle’s dash cam in the same direction captured that Tesla was driving very fast before reaching the traffic light intersection. The vehicle’s high brake light did not light when Tesla passed the traffic light. It never showed any signs of slowing down. The dash cam shows that after hitting two white cars at the intersection, it continued to slide and rushed to the roadside guardrail to stop. It almost went 500 meters from the intersection where the collision occurred.

The video taken by the citizens at the scene shows that the front of the Tesla was damaged. The body of the vehicle with which it collided was also damaged, and the airbags had all been deployed. A white car was severely damaged, and the trunk was severely deformed and dented. One of the damaged cars was equipped with a baby seat in the rear. The car’s occupants were lying on the seats in an unconscious state.

In response to the three-vehicle collision accident on the Internet, the Taizhou police issued a report. At about 15:46 on November 28, the Tesla car at the intersection of Luqiao Avenue and Nanguan Avenue in Luqiao District, he collided with a small car waiting for a green light and then collided with another small car. All three vehicles in the accident were severely damaged, killing two, and injury to one. The wounded are being treated in the hospital. Xu Moujun, the driver who caused the accident, has been arrested by public security. The accident is under further investigation.

A recent incident of another Tesla

Two weeks ago, Tesla Model 3 lost its control & accelerated. It led to the death of two people & injury of three in Chaozhou, Guangdong province. It went over 2 km, knocking down two motorcycles. Police ruled out the reports that he was under the influence of alcohol.

Tesla has assured cooperation in both incidents and provided all necessary data needed for the investigation.

A year ago, Tesla was facing severe PR issues in China. After several car crashes, which according to data released by Tesla, were caused not by car defects but by bad driving abilities of drivers, Chinese media started a substantial negative press. Despite the investigation didn’t prove any brake failure, many local media referred to it as Brake failure incidents. Tesla then started to take legal steps towards those accusations and had several wins resulting in drivers apologizing to Tesla for faking the brake failure accidents and paying the US automaker fine of 7500 USD.

What is important is that recent accidents, despite going viral, don’t have such wide negative coverage in Chinese media as a year ago. Very few articles I read accuse Tesla directly, the reports are much more unbiased, talking about waiting for investigation results and highlighting Tesla’s cooperation with authorities.