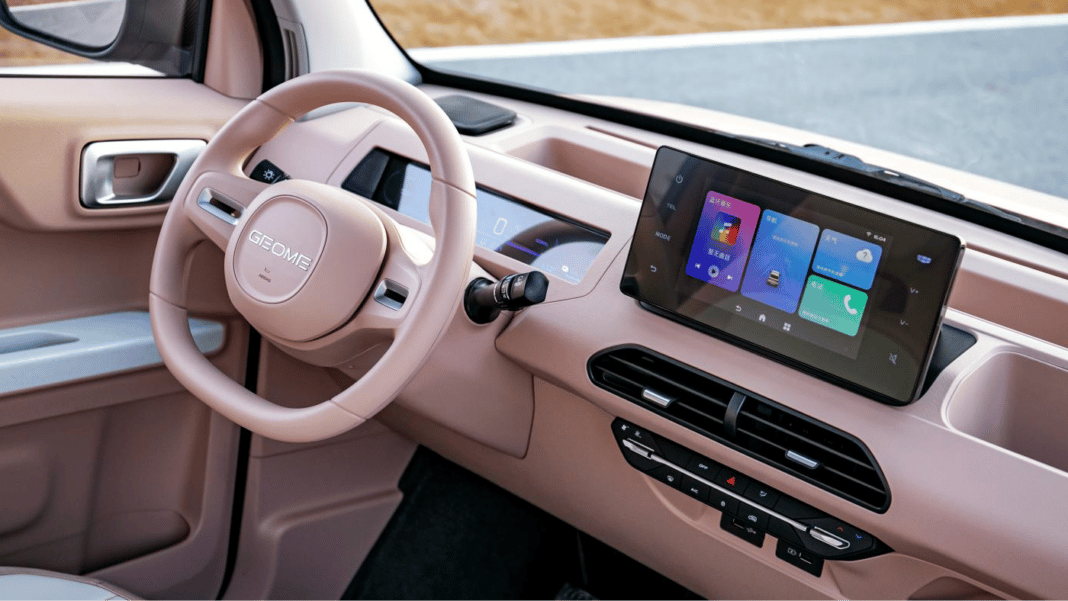 The electric city car from Geely Group called Panda mini is another competitor to the Wuling Hongguang Mini EV. Its interior and specs were unveiled in China. It has two screens and up to 200 km of range.

First, we should mention the confusing badging of the Geely Panda mini. In September, it showed up in MIIT announcements under the Geometry brand with another name. This vehicle was simply called ‘M2’. Later, it has showed up in the MIIT announcements once again. But this time Geely decided to change its name to ‘Panda mini’. They’ve also added a strange ‘GEOME’ lettering on the front and the rear end of the Panda mini. It hints at the connection of this tiny vehicle to the Geometry brand. However, the Panda mini will become a part of the Geely model line. So its naming and badging may confuse someone.

What Do We Know About Geely Panda Mini?

The center console of the Panda mini has two screens. The first one is a strip instrument panel monitor with a diameter of 9.2 inches. As for the main screen, it has a smaller diameter of 8 inches. Under the main screen, we can see two air vents and a block of physical buttons. And at the lowest point of the center console, we can see two USB ports. On the right, we can see a pair of open compartments. So it’s obvious that the front passenger won’t have an air bag. The thing is, the Panda mini simply doesn’t have enough space for it. The center tunnel of the Panda mini got a rotary gear shifter and two window switches.

Now, let’s get to the specs of the Geely Panda mini. According to the latest information, it will have up to 200 km of range. What is also important is that it will have a possibility of 22 kW fast charging. Geely mentioned that the Panda mini will be able to charge up from 30% to 80% in 30 minutes. As for the zero-to-hundred percent charging, it will take 68 minutes. It will also have an AC charging port for 7 kW. With an AC charging station, it will be able to charge up in 3 hours. The Panda Mini will have two driving modes: Normal and Sport. Moreover, it will have 3 different recuperation modes.