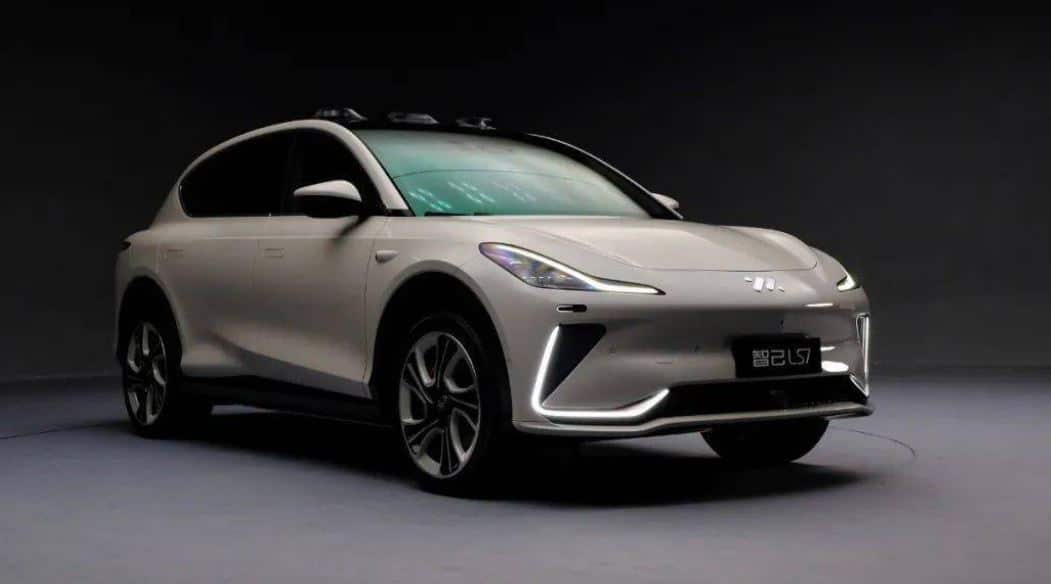 The IM LS7 will be available in two battery versions of 90kWh and 100kWh. The 90kWh will be built by a joint venture between SAIC and CATL. The 100kWh+ variant with single motor RWD has a CLTC cruising range of 660 km. The dual-motor four-wheel drive version outputs 425 kW (650 hp) and 725 Nm torque, offering a CLTC cruising range of 615 km and only taking 4.5 seconds to accelerate from 0 to 100 km/h.

The three pods on the roof are part of IM’s Advanced Driving Assistance System. The pod in the middle is for a high-resolution camera unit, and the pods on the left and right are for lidar units.

On the front, it adopts a closed front face design, and the headlights on both sides are in an “L” shape. It gets all-LED lights inside the headlights. The headlights can be controlled via the central control screen. For example, to let pedestrians know that they have the right of way, the driver can turn on the walking pedestrian signal in the front. The LS7 also gets three proper vents and LED daytime running lights on both sides. IM Motors also adds through-type vents to increase the lateral visual width.

The LS7 will be equipped with a new smart cockpit 2.0 with the IMOS2.0 version. In the interior, the LS7 features a triple screen design including an LCD instrument panel, central control screen, and a display for co-pilot display. The screen dimensions have not been announced by the carmaker. It is the first mass-produced vehicle in China with a half-width steering wheel. IM Motors also provides an option to choose a full-width steering wheel.

The LS7 has a large windshield with dimensions of 1613 x 1620mm that extends all the way above the driver’s head. IM Motors claimed that the windshield glass is aviation-grade material.

The door adopts a borderless design with an electric suction door lock. The co-pilot seat can be folded down electronically and can slide under the dashboard.

Lastly, the LS7 has a zero-gravity-inspired seat (also knowns as a ‘fatigue-free’ seat) on the right side of the rear row. This technology alleviates fatigue when driving, pursuing the ideal posture to make long drives more pleasant, always maintaining seating comfort.