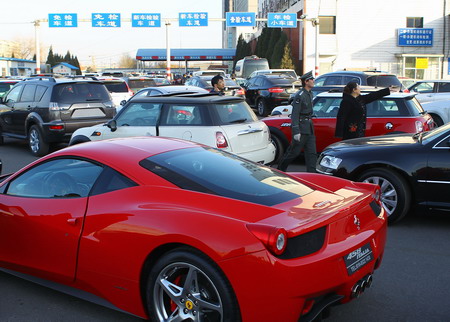 Beijing will limit the number of licence plates for 2011 to 240.000. Beijingnese are buying cars like crazy in the last weeks of 2010, up to 5000 a day. Pic above shows the situation at the Beijing government’s offices for applying for license plates, there is a que of over 1000 vehicles right now. Note that some cars aren’t even sold yet, the dealers try to get plates because they fear they can’t sell the cars without ‘m.

Read on for a background article from ChinaDaily:

Beijing announced a package of detailed rules on Thursday to ease its growing traffic gridlock, the rumors of which had caused frenzy car buying this month.

The city will only allow 240,000 vehicles to be registered next year, said Zhou Zhengyu, vice-secretary general of the Beijing municipal government.

The quotas will be divided among organizations and individuals every month, as part of a new policy to ease traffic pressure in 2011, according to a chinanews.com.cn report on Thursday.

Of the quotas, 88 percent will go to individuals through a lottery. Beijing residents who buy cars after Dec 24 will have to wait for limited licenses on Janurary 26, 2011.

Beijing authorities released the new policy to deal with gridlock on Thursday afternoon. The measures will cap the number and use of government cars and limit vehicles without local licenses on ring roads during rush hour.

The official figure suggested car ownership in the city increased by 30,000 just in the past week, with a maximum addition of 5,000 cars per day. Industry insiders expect the total car ownership in Beijing would exceed 5 million by February 2011 with the current growth rate.

Many new car owners said they arrived there before dawn.

“The ambiguity of the draft plan may have misled the public and created some panic,” Zhang Changqing, director of the transportation law institute at the Beijing Jiaotong University.