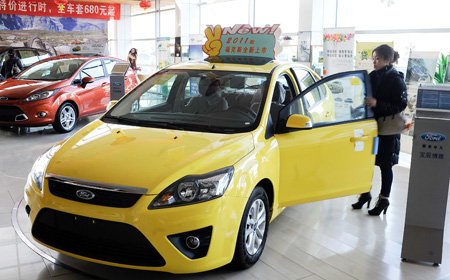 Ford, which makes cars in China with Mazda Motor Corp and Chongqing Changan Automobile Co, operates two plants, one in Chongqing and another in Nanjing. But Ford and Mazda are awaiting regulatory approval to split their venture into two 50-50 entities with Changan.

Ford, which aims to sell 1.5 million vehicles annually in China and to have an 8 percent market share by 2015, is considering building a new plant, possibly in Tianjin, it said. “Certainly, we have ambitious plans to continue to grow in China, the world’s largest automotive market, just as we do for the rest of the growing markets in our Asia-Pacific and Africa region. We have nothing to announce at this time, however,” the automaker said in a statement.

Ford, the only US-based automaker to have steered clear of a US government bailout and bankruptcy in 2009, is a relative late-comer to China. However, it has been accelerating its expansion, building its third China car plant in Chongqing, and its second plant – with its partly owned Jiangling Motors Corp – in Jiangxi province.