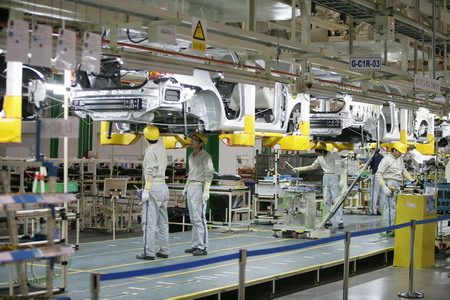 The operation of Japanese automakers in China won’t be affected in the short term even as their domestic production is halted in the aftermath of Friday’s severe earthquake and tsunami, automakers said on Monday.

However, the long-term impact is still under assessment, they said.

“Our production in China will continue as usual in the short-term as our locally produced models have a high localization rate, because most of the parts are sourced from domestic suppliers,” said Niu Yu, a spokesperson for Toyota China.

He told China Daily that Toyota, and its supply chain companies in Japan, have shut down production with the primary consideration being to allow employees to check on the safety of their families. The damage to the facilities is still being assessed, he said.

“The long-term impact on our production in China depends on the results of the assessment made by our headquarters in Japan in the coming days,” said Niu.

“Currently, the production halt in Japan will have no affect to our output of Nissan-branded models in China, as most of our parts are locally produced,” said Shen.

Moreover, “we have enough inventory of Japan-imported parts in our warehousing center in Shanghai. The supply of parts won’t slow down our local productions.”

She also said that the company’s premium and imported car brand Infiniti may face challenges, but “the future impact is still under evaluation at the headquarters”.

Another Japanese automaker Honda said in its statement emailed to China Daily that the shutdown of its factories in Japan won’t affect production in its two Chinese joint ventures until this weekend at the earliest. Local manufacturing of motorcycles won’t be affected until the end of the month.

The company said that the disaster in Japan won’t have an impact on its premium brand Acura, as the majority of cars and parts are imported from the United States and Canada, except the RL car model.

However, Lin Huaibin, manager of China Vehicle Sales Forecasts at the consultancy IHS Automotive, is not that optimistic.

“The earthquake will have a direct impact on car production in China as a large proportion of automatic transmissions are still being imported from Japan to supply not only Japanese original equipment manufacturers (OEMs) but also OEMs such as Volkswagen, General Motors and several Chinese automakers,” said Lin.

“Japanese OEMs such as Toyota, Nissan and Honda also import core engine components from Japan for vehicles such as the Accord, Camry and Teana,” he said.

“It is difficult to fathom the ramifications at this stage as we do not know to what extent engine and transmission production will be affected in Japan although we think the production here in China might have to slow down a bit as a result of the earthquake,” he told China Daily.

According to a report released by Guosen Securities on Monday, in 2010, China imported 254,000 vehicle units from Japan, accounting for 31.3 percent of the total automobile segment, and with a value of $7.6 billion.

The import of auto parts from Japan reached $10.9 billion in 2010, about 39.9 percent of China’s total auto parts import.

The report said that the production halt in Japan might hit imported Japanese cars in China in the short-term, especially in price.

However, it will have a limited impact on their local production in Chinese joint ventures as Japanese auto makers have established a mature supply system in China.