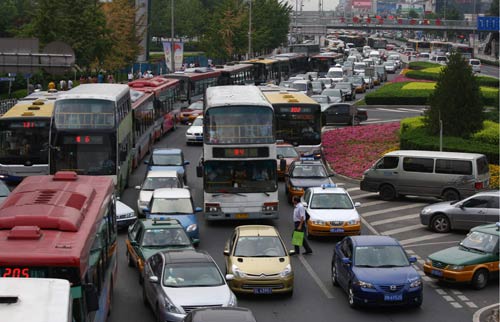 The Beijing municipal government is at it again, new plans against car owners who all together cause those traffic jams. Read on:

Beijing – Private car owners might have to accept higher charges as the city’s traffic authority plans to further improve public transport and reduce the use of vehicles to ease traffic congestion.

Liu said this should be the city’s “primary policy target” in solving traffic congestion.

Although Liu has suggested that charges for private cars will be increased, neither he nor the commission have specified what measures will follow the raising of parking fees in April.

Meanwhile, Liu said that constructing a denser underground transport system in downtown areas will be another key component in reducing congestion on the roads.

“Eighty percent of new rail transit lines will be built in downtown areas,” he said.

According to Liu, the commission estimates the public transport system will take up 42 percent of the daily transport volume in Beijing.

The city’s traffic woes have been slightly eased since a series of measures were put into effect in the first half of this year, he said.

The average driving speed during rush hour reached 24 km/h in the first six months of the year, a 10 percent increase over the speed during the same period last year.

“It is a good sign that the comprehensive measures have taken effect,” Liu said. “But tackling gridlock is still a challenging, long-term task.”

He said the reforms had yielded a measurable effect, even though the number of vehicles on the city’s roads in July jumped by more than 600,000 compared to last July’s figure.

However, they did admit that it has a long way to go to attract private car owners.

Experts also said the lack of coordination between buses and the subway remained a problem.

Zhang Changqing, an expert on public transport law at Beijing Jiaotong University, pointed out that usually the city’s subway stations and bus stations are not located near each other due to uncoordinated planning.

“If the bus and rail systems could be linked, it would be a cutting-edge advantage,” he said.

Statistics from the commission show that the public transport system had already recorded a daily volume of 19.43 million individual journeys in the first quarter of 2011, a figure close to Beijing’s population of 19.61 million residents.

The commission’s report was widely regarded as a half-year summary of the city’s intensified efforts to reduce traffic problems. Measures such as a license plate lottery system, increases in parking fees and restrictions on non-local cars entering the city during rush hours were introduced earlier this year.

Pressure mounted on the bureau earlier this month when a poll on its website showed only 47 percent of residents believed the traffic situation was improving, which raised doubts about the effectiveness of the city’s new measures.

The Ministry of Public Security said that Beijing had 4.64 million vehicles by June, but only 2.5 million parking spaces.