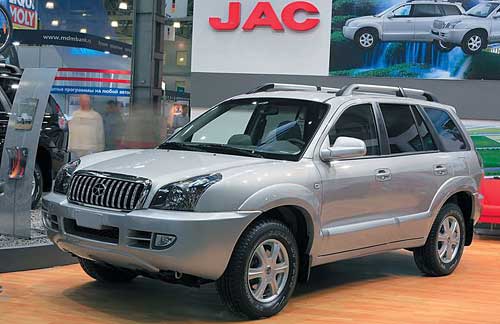 The factory, with an annual capacity of 100,000 cars, will begin operations by 2014, Habib said. SHC will account for more than half of the investment, Habib told reporters in Sao Paulo.

With sales during the last four months reaching 10,073 autos, JAC will be the latest Asian car maker to build a factory in Brazil. China’s Chery Automobile last month laid the cornerstone for its first manufacturing plant outside of its Asian home country, and South Korea’s Hyundai Motor Co. began construction of its $600 million assembly plant in February. Japan’s Nissan Motor Co. and Honda Motor Co. also have announced new investments in the country, the world’s fourth-biggest market by sales last year.

Habib told Dow Jones Newswires in May that after company sales reach 100,000 in Brazil, import logistics become too complicated and it is more cost-effective to assemble cars in the country. The company expects to reach 100,000 in sales by the end of 2012, he said Monday, and investing to expand dealerships further without a factory doesn’t make sense.

“You can’t spend $1 billion on your dealership network counting on just one advantage: the favorable exchange rate,” Habib told reporters. “The exchange rate sometimes is favorable, and sometimes it’s not. You just have to take a look at what happened in 2008.”

Brazil’s currency strengthened last month to 1.533 reais per dollar, the strongest since 1999–when the country instituted a free-floating currency–topping a previous record set in 2008. The collapse of Lehman Brothers in 2008, however, sent the currency tumbling to BRL2.59 in a few months, leaving several Brazilian companies who had bet on continued strength in the currency with millions of dollars in losses.

Habib recognized the lower cost of producing cars in China–a cost reduction that auto maker association Anfavea estimated at about 60%–but said that he doesn’t expect prices to vary much when JAC begins production in Brazil.

With production facilities in the country, Habib expects JAC to “easily” reach 3% market share by focusing on first-time car buyers in the expanding economy. Breaking past the 3% mark is difficult for all car makers, including rivals in Brazil from France, Japan, South Korea and even China, but JAC Vice President Dai Maofang said Monday that the company is aiming for a 5% market share.