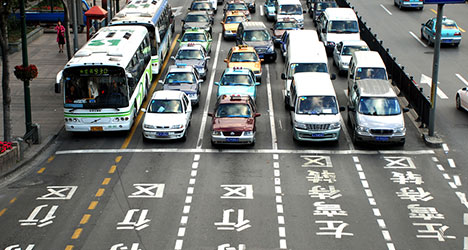 After a decade of nurturing China’s auto industry to become the largest in the world, this country’s leaders are having second thoughts.

A succession of government officials at a weekend conference called for China’s automakers to shift their focus from making ever more cars and toward producing more fuel-efficient and more advanced models, including gasoline-electric hybrids and all-electric cars.

“The government must take the leading role in controlling unrealistic growth” of the auto industry, Jiang Kejun, the influential director of the Energy Research Institute at the National Development and Reform Commission, China’s top economic planning agency, said Sunday during a speech at the conference.

Lu Shize, director of air pollution control at the Ministry of Environmental Protection, echoed Mr. Jiang, saying that “for the auto industry to develop, we should not try to sell more, but to improve the units sold.”

The government officials did not say how they would restrict growth. But growth has already slowed partly because of limits on the number of new cars that can be registered each month in Beijing, and mostly because government incentives expired at the start of this year. Those incentives were subsidies for rural buyers and a two-year reduction in the sales tax on new family vehicles.

The officials’ remarks strongly suggested that the Chinese auto industry’s lobbying for the reinstatement of the incentives would fail and that restrictions on registering new cars would be extended to more cities.

Any slowdown in growth is likely to shock the world’s automakers. Practically every American, European, Japanese and South Korean automaker is expanding in China, including General Motors, Ford Motor, Nissan Motor and PSA Peugeot Citroën. Chinese automakers are building assembly plants even faster.

Growth in China culminated in a burst of sales in 2009 and 2010 as the government cut taxes on car sales to stimulate the economy during the global economic downturn.

J.D. Power & Associates, the global consults, estimated last month that China would have a manufacturing capacity of 31 million vehicles by 2013. Yet the domestic market has decelerated sharply this year, with sales of family vehicles up just 5 percent in the first seven months, compared with the period a year earlier. By contrast, sales had soared 33 percent in 2010, compared with 2009.

Much slower sales growth this year has prompted strong lobbying by the auto industry for a renewal of government incentives. But if anything, policy makers seem to be leaning toward more limits to address China’s steeply rising dependence on imported oil and its traffic jams, air pollution and shortages of land in many areas for more road construction.

Officials in Beijing have urged the auto industry to improve technology for years. But they clearly shifted their tone at the conference this weekend in calling for curbs on the industry’s overall growth in sales and production.

Many Chinese automakers are partly or entirely owned by municipal or provincial governments, however, and these lower tiers of government have pushed their manufacturers to expand as fast as possible to maximize jobs and economic output.

But limits on car sales in big cities may pressure Chinese automakers to slow down. The municipal government of Beijing, China’s largest single market with 4 percent of sales last year, stunned the industry last December by imposing stringent limits on the number of new-car registrations each month, effectively imposing a decline in sales of close to 70 percent.

Industry executives argued that this was purely a response to severe traffic jams in Beijing and lobbied for the central government not to let other cities take the same course.

Shanghai is unusual in having limited car registrations since 1994 because its historic city center has many narrow old streets. But with the exception this summer of Guiyang in southern China, most Chinese cities have been awaiting signals from Beijing on whether to follow suit.

Mr. Jiang said during a brief interview Sunday on the sidelines of the conference in Tianjin that he expected other cities to do so. “Beijing is a very typical city from which other cities may learn,” he said.

Zhao Hang, the president of the China Automotive Technology and Research Center, a government-affiliated complex of laboratories based here that organized the conference and that collaborates closely with automakers, expressed misgivings about further limits on car registrations. He said that the limits could discourage the replacement of older cars.

Limits on car registrations have also meant that those who do win the right in lotteries to buy a car may be more likely to buy a large car than a small, more fuel-efficient model.

Traffic accidents are the single biggest reason people in the Beijing area go to physical rehabilitation centers, he said.

Xiang Dihai, the director of economic construction at the Finance Ministry, said that the government would soon issue new subsidies for the auto industry, but that they would be aimed at high technology vehicles with very low fuel consumption. China already has national and local subsidies of 123,000 renminbi, or $19,300, for each all-electric car, but virtually none are sold.

Mr. Xiang said that China would proceed with plans to impose stricter fuel-economy standards by 2015, following recent moves by the United States, Japan and the European Union to require better gas mileage.

Auto executives from domestic and foreign automakers alike said in speeches at the conference and during interviews that they would do more to adopt advanced technologies, although domestic Chinese automakers tend to have modest research budgets and rely on multinational partners for their vehicle designs.

Largely unaddressed at the conference was what would happen to the industry’s emerging overcapacity.

The government has prohibited Chinese automakers from making big jumps into the American market and severely restricted their entry into the European market. They have also demanded that automakers increase vehicle quality considerably, and have suggested that high-volume exports may not be allowed to start until 2015 or so.

The goal has been to make sure that when large-scale exports begin, Chinese cars do not initially acquire the same reputation for shoddy quality that bedeviled the South Korean industry when it entered the American market and that took many years and offers of long, costly warranties to overcome.

Wu Song, the deputy general manager of the Guangzhou Automobile Group, which has alliances with a several Japanese automakers, said that President Hu Jintao of China had visited the company on Aug. 14 and told executives to improve technology.

The company plans to do that and start selling cars under its own brands, Mr. Wu said, adding, “We must own our own brands to compete in the international market.”