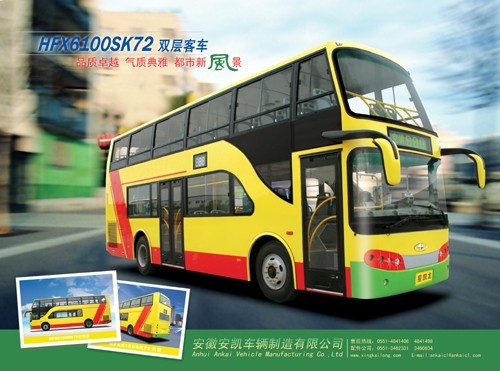 Chinese busmaker Anhui Ankai has clinched a deal with a UK tour operator to provide the latter with red double-decker buses, a national symbol of Britain, to serve the 2012 Summer Olympic Games, which will be held in London.

The Anhui Ankai Automobile Co Ltd (aka Xingkailong) signed a contract with Britain’s Big Bus Tours sightseeing company on Sept 29 to export 34 open-top double-decker buses, which will be used for sightseeing tours during the games, sources with the bus company said Saturday.

The deal marks the first time for China-made double-decker buses to enter the UK market, where there are a stricter certifications for automobiles.

Ankai’s vice president Wang Xianfeng said his company has already assembled a sample bus, which has obtained approval from both Big Bus Tours and British automobile certification authorities, including the Vehicle Certification Agency and the Vehicle and Operator Services Agency.

“The cooperation (between Ankai and Big Bus Tours) is an indication that China’s buses are up to the technical standards required in the EU market,” Wang said.

Ankai, a major Chinese bus manufacturer, has been working to tap overseas markets in recent years. The company received a 3,000-unit order from Saudi Arabia and a 280-unit order from Russia earlier this year.