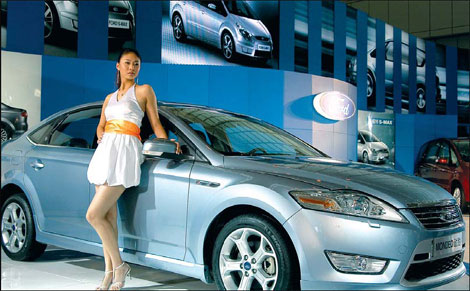 Finally, Ford starts to take China seriously. It was about time. From ChinaDaily:

US carmaker Ford Motor Co vows to speed up introduction of new products to China to further tap the world’s largest vehicle market, a move crucial to achieving its ambitious global mid-decade growth targets. In a recent interview in Beijing, Ford CEO Alan Mulally said the carmaker “will bring our best products into China as quickly as we can”.

He said Ford plans to introduce 15 new models in China by 2015 as part of its 50 new products for the Asia-Pacific and Africa.

Ford, which sold Swedish brand Volvo to Chinese carmaker Geely for $1.5 billion in August last year, aims to boost its global sales to 8 million vehicles a year by 2015 from 5.3 million units last year, with 60 to 70 percent of the growth coming from the Asia-Pacific and Africa.

“We also are looking at opportunities create an indigenous brand at our joint venture (in China),” he added.

To comply with local auto industry policies, a slew of other foreign carmakers such as Honda, Nissan and Volkswagen have created indigenous brands at their joint ventures in China that do not carry their international badge.

The Chinese government has asked Sino-foreign joint ventures to develop homegrown brands if they want to build new car plants.

Joe Hinrichs, president of Ford Asia Pacific and Africa, said the company is building seven new plants in the Asia-Pacific and Africa, including four in China, to hike annual production capacity to 2.3 million vehicles in the regions by 2015.

“China accounts for 60 percent of our APA (Asia Pacific and Africa) sales now and will be leading part of our sales growth in the decade,” Hinrichs said.

However, Ford lags far behind rivals such as General Motors, Volkswagen, Toyota, Honda, Nissan and Hyundai in China sales.

Ford sold about 580,000 units last year in China while its US counterpart GM moved more than 2 million vehicles.

In the first eight months of this year, Ford sold 341,746 vehicles in China, an increase of 11 percent over a year ago.

Last month, Ford’s joint venture with Mazda and Chang’an started building a new $350 million transmission plant in the western city of Chongqing with an initial production capacity of 400,000 six-speed automatic gearboxes a year.

The joint venture now has two car plants in Chongqing and the eastern city of Nanjing with a combined production capacity of 430,000 units a year.

The tie-up is building a new car factory in Chongqing that will be operational next year with an initial capacity of 150,000 units.