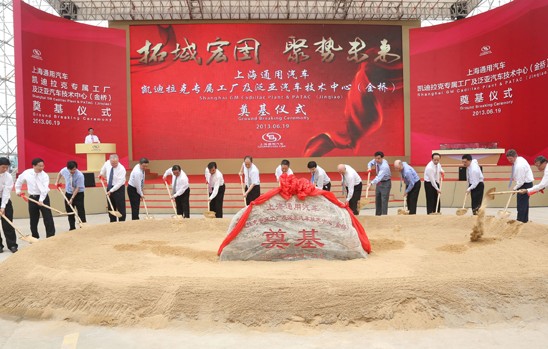 The Shanghai-GM joint venture started construction of a new Cadillac factory in China on Wednesday to target luxury buyers in the world’s biggest auto market. Company leaders said they were optimistic about long-term growth in the luxury segment and have aggressive plans to expand Cadillac’s dealer network.

“Rising incomes per capita are going up. China’s a great market,” said GM CEO Dan Akerson. “We’re going to bring our high-end premium product here and we’re going to see how we run against the competitors from Europe and Japan.”

GM has made it a priority to increase Cadillac sales in China, where the luxury market is dominated by brands like BMW and Audi.

Speaking ahead of the groundbreaking ceremony for the plant, GM executives said they forecast China’s luxury market to grow by 4 percent this year, about half the rate they expected six months ago. For the overall car market in China, the company expects at least 8 percent growth.

Sales of luxury goods in China have slowed amid a crackdown by the Communist Party on government extravagance aimed at reducing corruption by officials, a major source of public anger that threatens the party’s legitimacy.

“I don’t think we should put too much emphasis on the fact that in the last six months in China the luxury market has gone down,” said Bob Socia, president of GM China. “Clearly it’s not at the level of growth we expected at the first part of the year.”

However, Akerson added that certain segments of the luxury market would grow faster than others and that it would take GM time to catch up.

“We just have to be agile enough,” he said. GM forecasts China will account for up to two-fifths of the global luxury auto market by 2020.

The executives did not say which models would be produced at the $1.3 billion plant in Shanghai’s Jinqiao zone, which will have a capacity of 160,000 vehicles a year and includes a research and development center.

GM currently makes just one Cadillac model, the XTS sedan, in China. Production began in February at another plant in Shanghai. It also sells the SRX sport-utility vehicle.

The executives reiterated plans to triple the number of Cadillacs sold in China to 100,000 by 2015 and quadruple its share of the luxury car sector to 10 percent by 2020. GM has said previously that it plans to launch one new Cadillac model in China each year for the next five years.

Socia said the number of Chinese Cadillac dealers will rise to 200 by the end of the year from 69 at the end of 2012.

Global and Chinese manufacturers are intensifying competition for increasingly prosperous drivers in China, the world’s biggest auto market by number of vehicles sold. Auto sales last year topped 19 million and analysts and automakers expect that number to rise to as much as 32 million by 2020 — the equivalent of the United States and Europe combined.