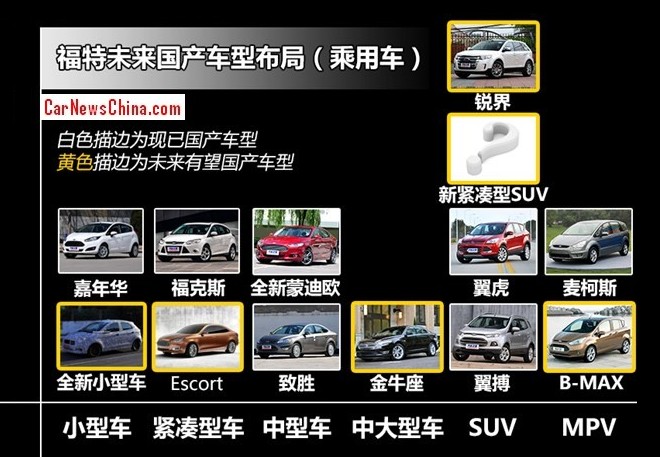 Ford sales in China rose to a record 647.849 cars over the first nine months of 2013, up 51% compared with the same period in 2013. Ford is on its way to sell about 900.000 cars in China this year. Impressive progress but still far behind the expected 3.2 million for Volkswagen and the 3 million for GM. Ford needs to grow even faster to catch up. Here is their master plan:

Ford currently makes the Fiesta, Focus Classic (last-gen Focus), Focus, Mondeo, S-max, Kuga (Escape) and the Ecosport at its Changan-Ford joint venture. Over the next three years Ford will add the new Ford Escort (basically the Focus Classic in a new skin), the Ford Taurus, a new China-only SUV positioned above the Kuga, a new China-only mini car positioned under the Fiesta (likely based on Ka platform), and the Ford B-max.

That’s seven new cars to be made in China.

Ford currently has about 350 dealers in China. Ford plans to almost double that to 680 dealers in 2015. Ford will especially focus on the largely untapped second and third tier cities.

The master plan will enable Ford to sell well over a million cars per year in China. Still no treat for Volkswagen and GM, but Toyota (just under one million expected for this year) Nissan (1.2 million) and Hyundai-Kia (1.6 million) will get very nervous.