Guangzhou bans 50% of all cars during peak pollution 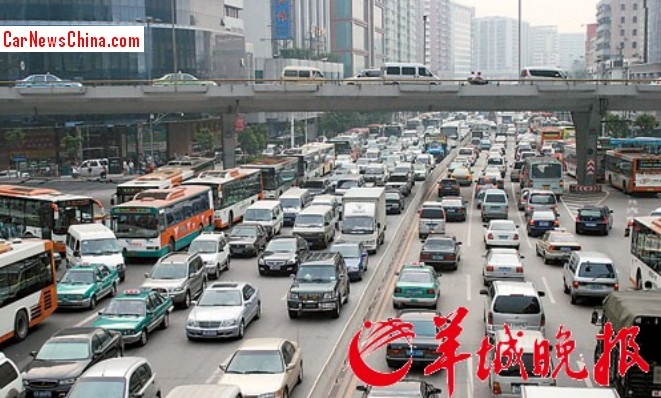 Beijing is not the only city in China battling pollution and traffic jams. The city of Guangzhou, capital of Guangdong Province, is severely polluted as well.The local government has implemented new measures that will ban 50% of all cars during peak pollution.

In addition, 30 percent of government cars will remain garaged if air pollution hits serious levels, and key enterprises will have to cut 30 percent of their emissions during a red alert, the highest level.

Under the alert system approved on Monday, a red alert will be issued when the air quality index is forecast to exceed 300 at more than half of the city’s 10 monitoring stations.

During orange alerts, issued when air quality index levels of 201 to 300 are forecast, businesses that fail to meet emission standards will have to cease emissions altogether, and 20 percent of government vehicles will stay off the road.

Construction sites that put dust and fumes in the air, as well as fireworks and outdoor barbecues will be banned during orange alerts.

The government’s fleet of 13,000 cars accounts for about 0.6 percent of the cars in Guangzhou, Yang Liu, director of the city’s environmental protection bureau, said at a news conference on Monday.

“In difficult times, public servants should take the lead in taking action to address environmental pollution.” Yang said Guangzhou Mayor Chen Jianhua pledged to go to work by subway during any environmental emergencies.

Of the six air pollution indexes, the PM2.5 reading failed the standard by the largest margin, averaging 47 micrograms per cubic meter and exceeding the standard by 34 percent in the three quarters. Guangzhou’s PM2.5 readings will decrease by more than 6 percent in 2015 compared with the 2010 levels, according to the city’s environmental protection plan.