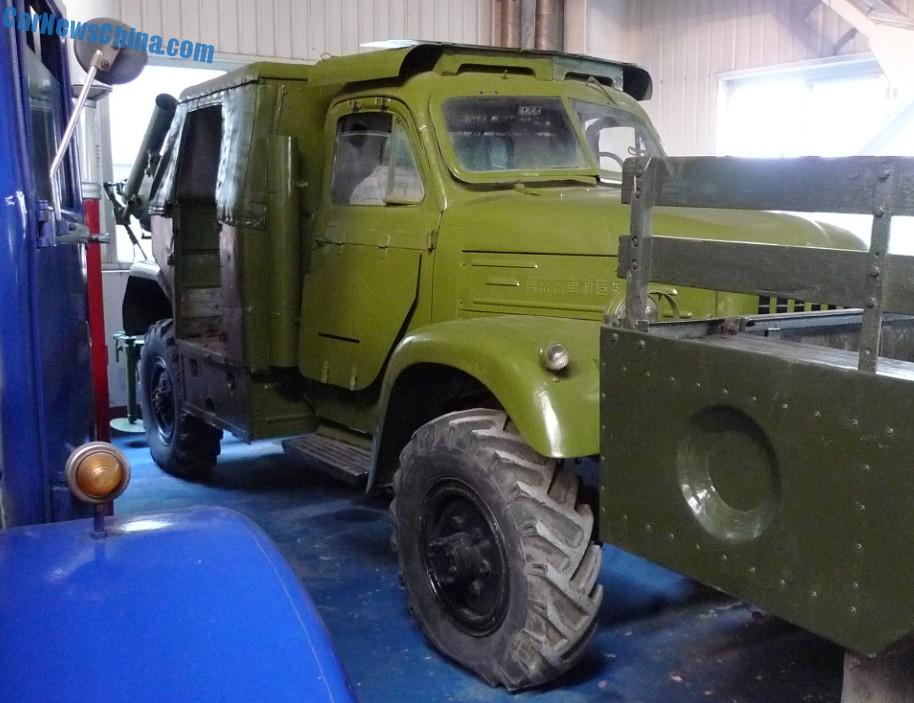 An ultra badass Nanjing NJ230 Type 63 130mm Multiple Rocket Launcher (MRL), Spotted in China in the Beijing Classic Car Museum. The vehicle stands on a heightened chassis and is fitted with four-wheel drive and heavy off-road tires. The windows can be covered by armor plating to protect the cabin during launch. What launches? 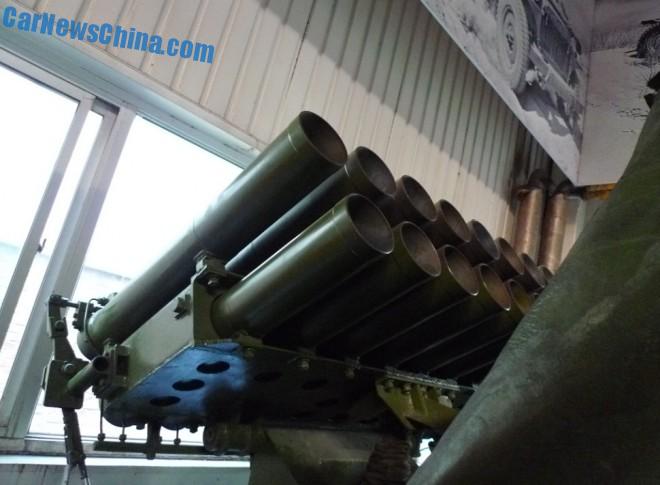 This does. The Type 63 130mm MRL system, installed far at the back of the chassis. The system consist of 19 tubes capable of firing 130mm missiles over a maximum distance of 10.12 kilometer with a maximum speed of 437 meter per second. 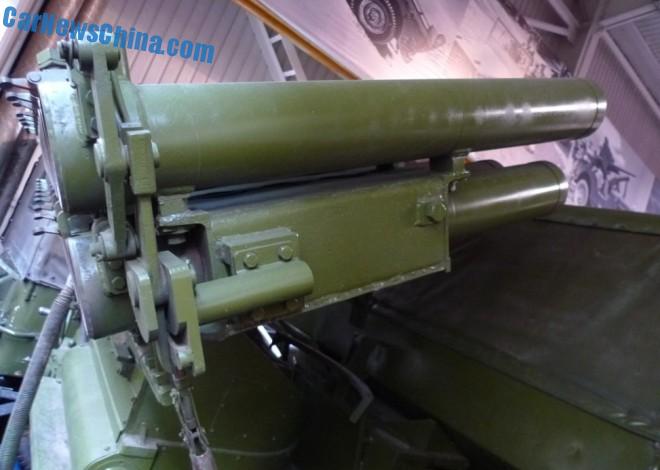 The tubes have a length of 1.050 meter. Weight of a single missile was 35 kilo. A missile was filled with 1.916 fragments lethal out to a 24 meter radius. The system was operated by hand by a crew of six. 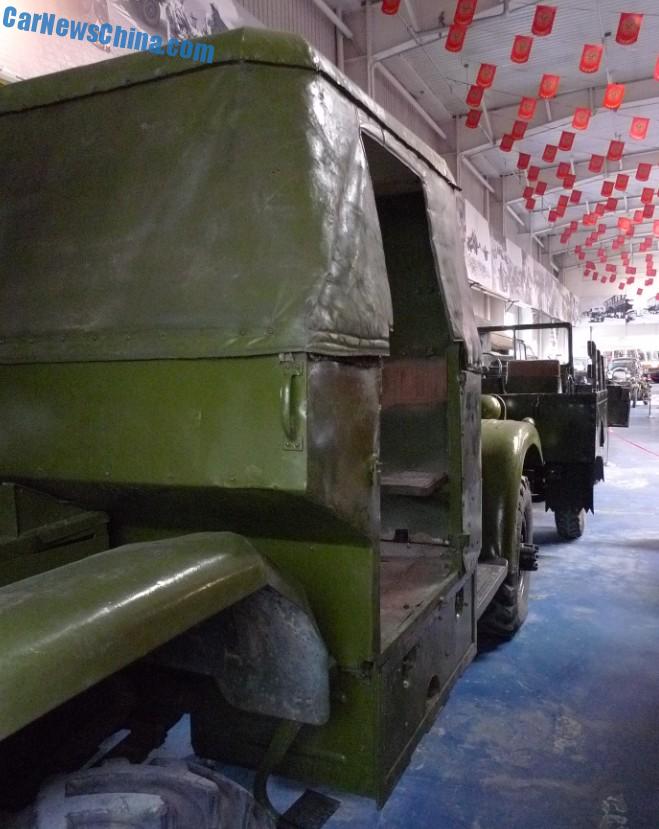 During transit the crew was seated in a compartment just in front of the MLR.

The  Type 63 130mm Multiple Rocket Launcher was designed primarily for operations against enemy infantry and light armored vehicles. It was widely in use in the Chinese army in the 1970’s and 1980’s. Export was successful too, with units sold to many second and third world countries during the heydays of the Cold War, including to Iraq which bought at least a dozen systems in the late 1970’s. One of those systems was captured by U.S. forces during the 1991 Desert Storm war, the system stands today in the U.S. Army Artillery Museum. 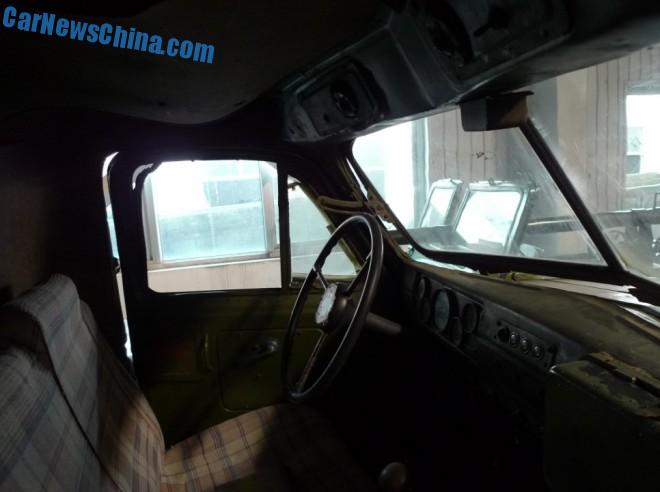 The Nanjing NJ230 truck was manufactured by the Nanjing Automobile Factory, later called Nanjing Auto, and today part of the Shanghai Auto Industry Corporation (SAIC). Production of the NJ230 started in 1965 and ended all the way up in the late 1980’s. Power came from a 3.5 liter six-in-line diesel engine with about 120hp. Earlier on we met a base flatbed variant in the Dalian Classic Car Museum in Dalian. 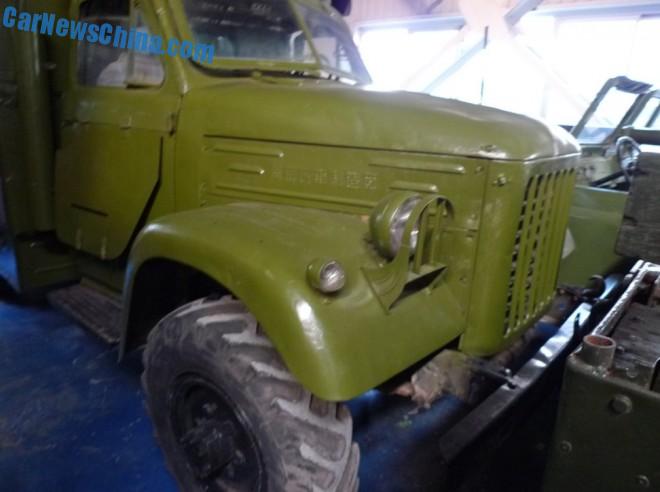 The NJ230 was based on the Soviet-Russian GAZ-63, which was a reverse-engineered copy of the Dodge WF-32 cargo truck that was shipped in great numbers by the United States to the Soviet-Union during the Second World War under the Lend-Lease program.

So a Dodge went to Russia, moved on to China, battled U.S. forces in Iraq,  and returned home in the end. A strange world indeed…