The Hongqi CA7600J at the Military Parade in China 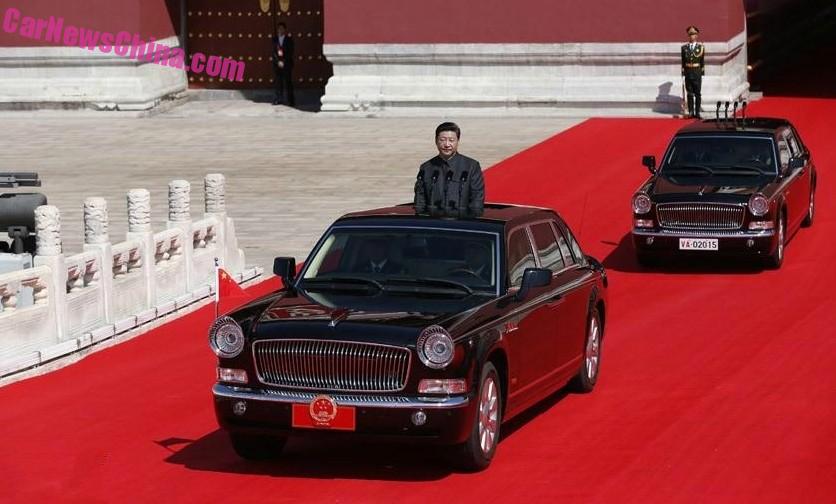 Last Thursday was a party day because China celebrated the 70 years anniversary of the end of the Second World War. For the first time ever the celebrations were dressed up with a badass military parade, designed to impress enemies and customers alike. Star of the show was, without any doubt, the mighty Hongqi CA7600J parade car.

On the first photo president Xi Jinping standing behind the microphones, leaving the premises of the Forbidden City via the center gate of Tiananmen. Behind Xi the spare parade car, following closely because you never know. Xi’s parade car does not have a real license plate but a seal of the People’s Republic of China. The spare car has a military license plate reading VA·02015.

The parade car is used by Xi to inspect the troops before the actual start of the parade. Here is Xi crossing the bridge over the moat of the Forbidden City, heading for Changan Avenue.

The CA7600J parade car was born in 2009 for that year’s military parade, which celebrated 60 years of communist China. The parade car made it public debut on the 2010 Beijing Auto Show, alongside the CA7600L state-limousine version (aka Hongqi L9), which goes without the fancy microphones.

The 2015 parade car looks exactly the same as the 2009 parade car, which was a bit of a disappointment for the many Chinese Hongqi fans, who where hoping for something new, like the Belarus Hongqi L5 open-top parade car. 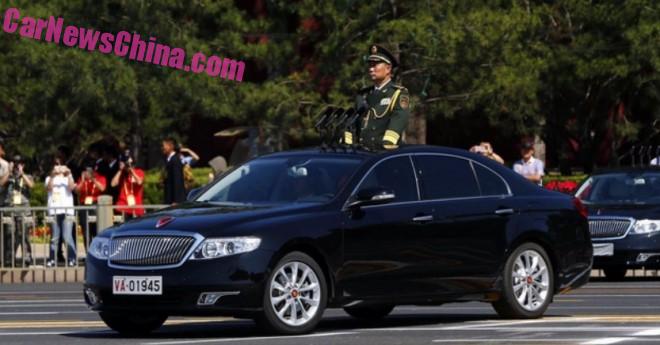 The second parade car is a Hongqi H7, paraded by the commander of the Beijing Military Region, which is the entity that organizes the parade. A spare H7 can be seen on the right, but it doesn’t ride in the parade like the spare CA7600J. License plate is VA·01945, making 70 with VA·02015.

It is the first time we see a Hongqi H7 parade car, and it is a surprising choice because it is basically a Japanese car, and the full name of the parade is ‘Victory Parade to commemorate the 70th anniversary of the Chinese People’s anti-Japanse war and the World’s anti-Fascist war’ (纪念中国人民抗日战争暨世界反法西斯战争胜利70周年阅兵式).

The Hongqi L7 is a rebadged 12th generation Toyota Crown (S180), with a big shiny grille and a Hongqi ornament on the hood. The S180 Toyota Crown was manufactured in China by the FAW-Toyota joint venture. FAW, or First Auto Works, is also the owner of the Hongi (Red Flag) brand. The connection is no secret but not very well known either. Still, many noticed the oddity but discussion has been muted.

During the 2009 parade the commander used a CA7600J, just like the president, but Xi wanted to make a point here, showing who is the big boss, and the commander had to to with an H7. 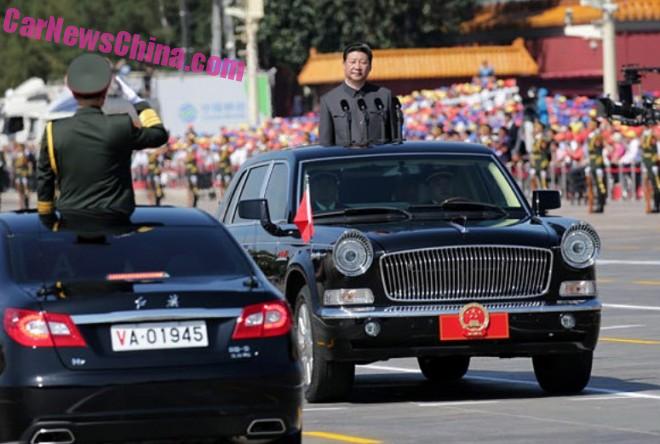 The commander salutes the president and announces that the troops are ready for inspection. 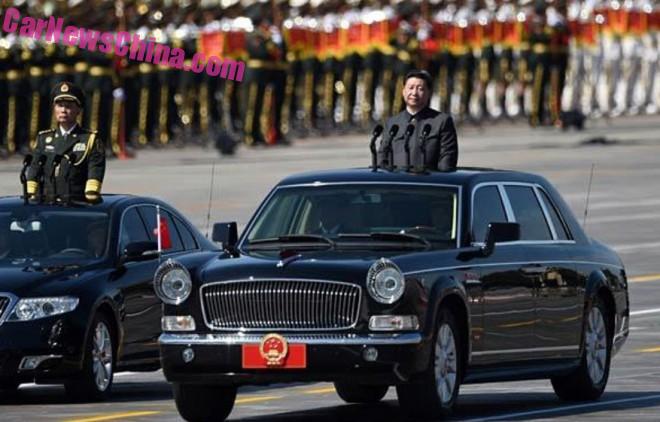 The inspection then begins.

The CA7600J and CA7600L are manufactured exclusively for the government. The smaller Hongqi H5 however, based on the same platform and powered by the same engine, will eventually launch on the public market. 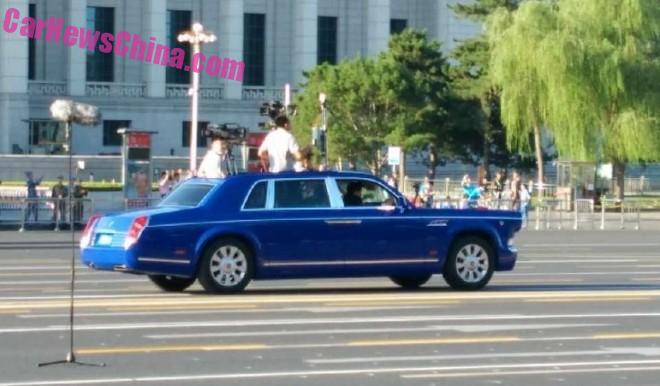 The parade is broadcasted live all over China. The images are filmed by zillions of cameras along the road and by three of these incredible cool CA7600J camera cars. They are painted in bright blue, and have cameramen peeping through the open roof instead of a president. No microphones either. 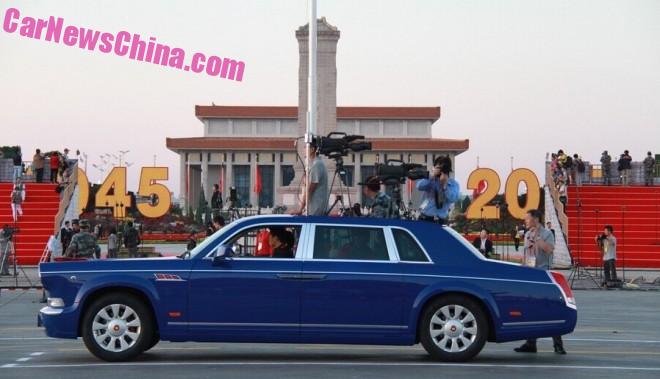 Another example seen just before the start of the parade. The blue camera cars debuted at the 2009 parade and became so popular that a Chinese car model maker launched an expensive 1:18 version. 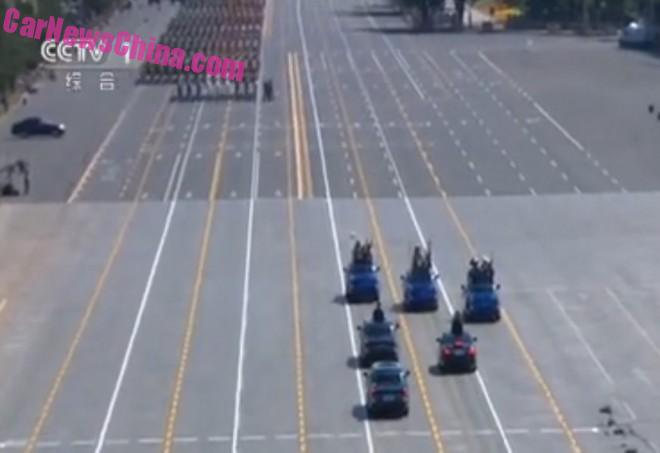 The inspection on the way. Three blue camera cars up front. President Xi behind the left camera car, followed by the spare parade car. The commander rides to the right and slightly behind the president. On the far left just under the CCTV logo the spare Hongi H7. 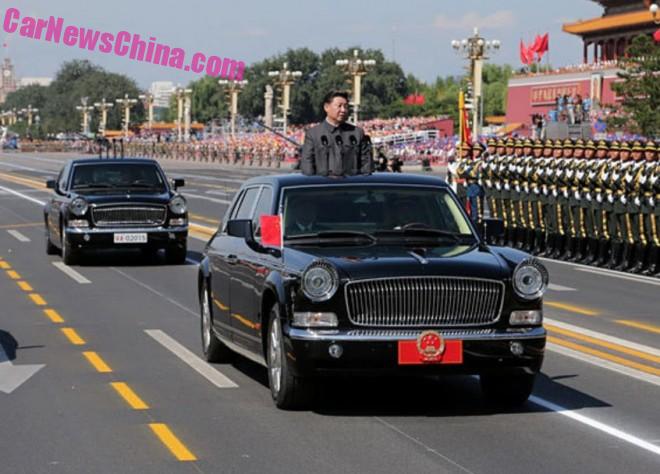 Xi at work. At every hundred meter the president greets the troops, to which they reply with a salute. 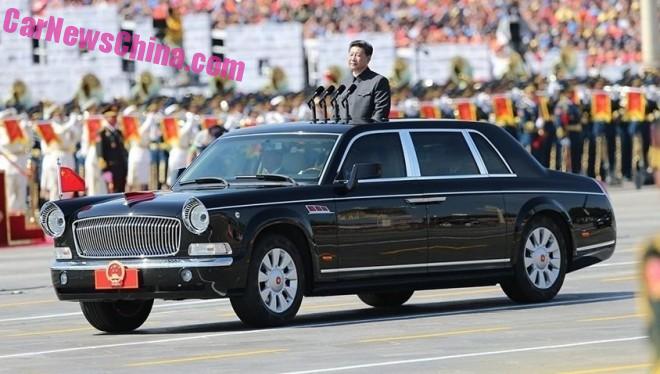 The parade car at speed. 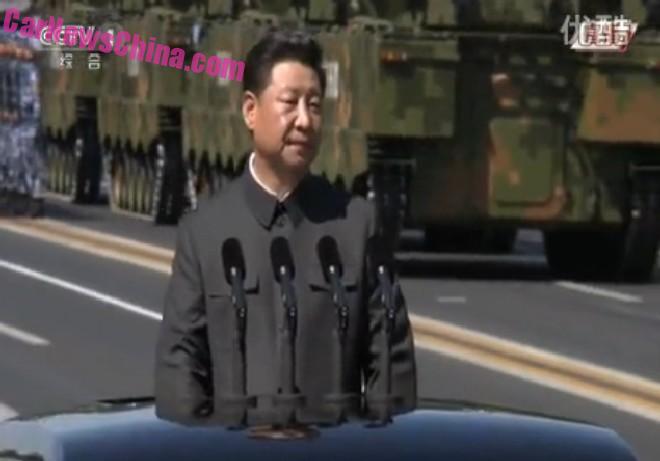 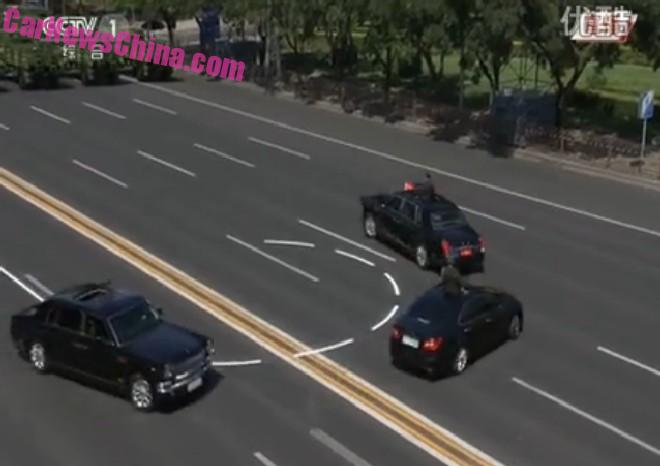 When the inspection is over the parade cars make a turn and ride back to the Forbidden City. 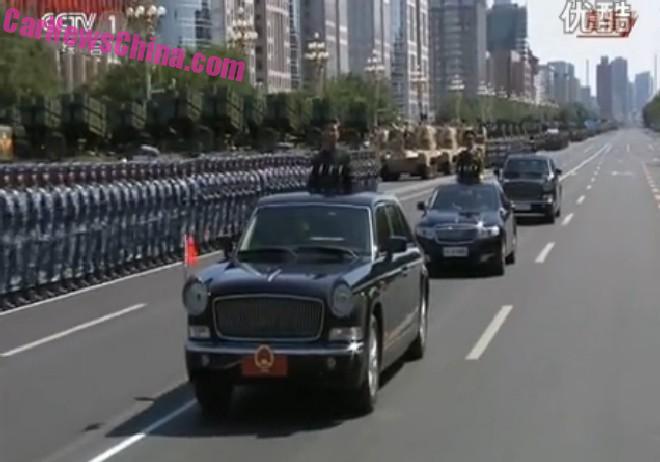 The commander now follows directly behind the president. Speed is up. 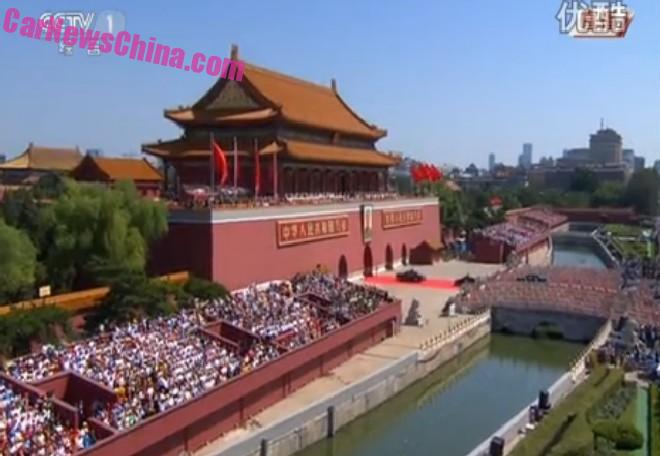 Back over the bridge and trough the gate. President and commander will now quickly climb up the grandstand and the parade will begin. The Hongqi CA7600J however, is done for the day. 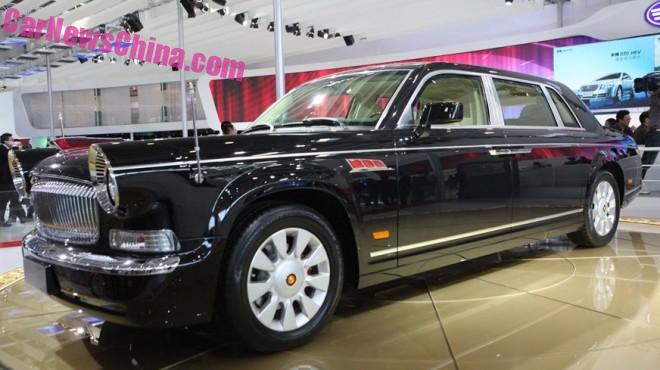 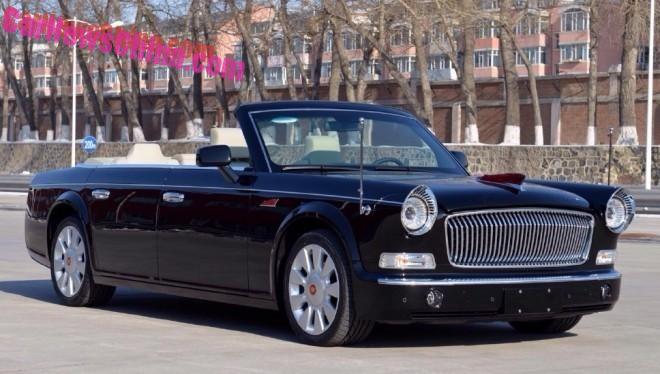