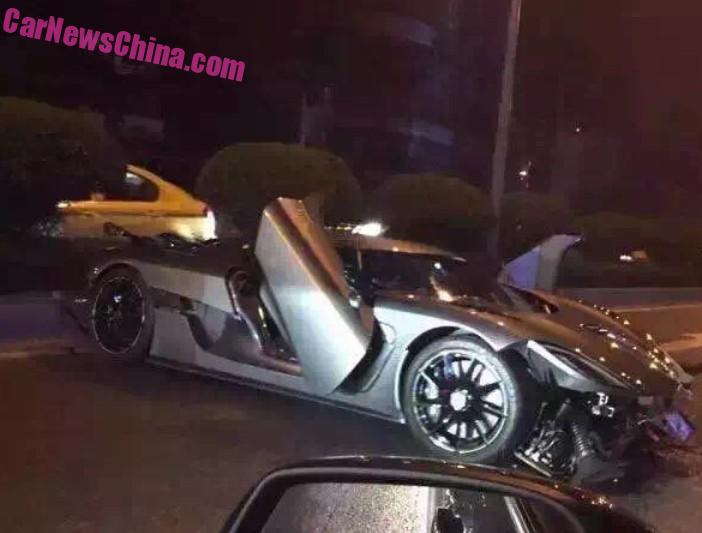 A dramatic supercar crash in China, this time in the great city of Chongqing. A Koenigsegg Agera R crashed into the guardrail fence on the left side of the road, bumped from the left side to the right side, and finally came to a stop against the divider. Happily, and miraculously, nobody got hurt.

These photos are from the moments right after the crash. Both doors are open and the passengers are gone. No other cars were involved in the accident. It is said that the owner of the Koenigsegg also owns a McLaren P1, a Porsche 918, and a Ferrari LaFerrari. Whether the owner was at the wheel when the accident occurred is not clear at the moment. Unclear too is the exact cause of the accident. But it was late, it was a supercar, so speeding probably is at least one of the reasons why… 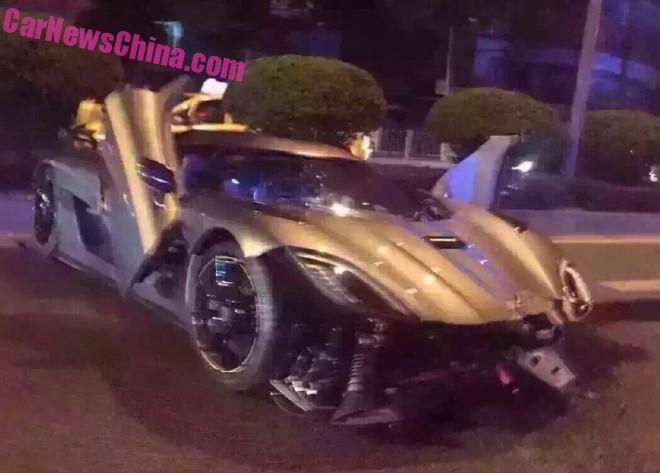 Heavy damage at the front. The bumper is gone and the suspension is most likely unhappy. 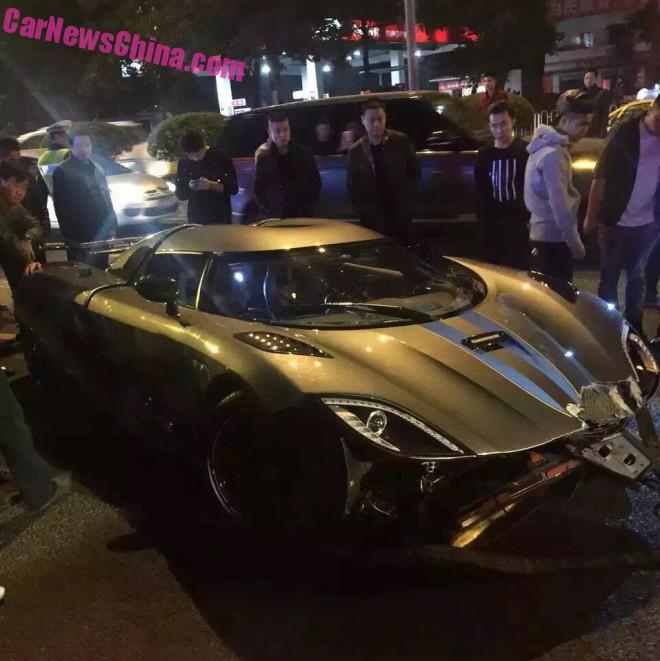 Like always in China, just after a few moments the vehicle was surrounded by curious local onlookers. 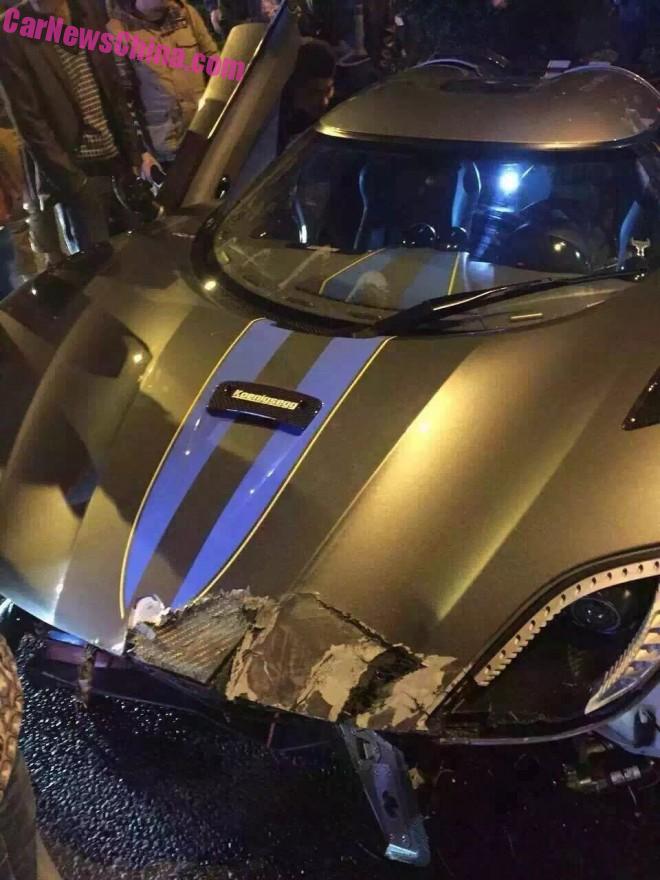 I can see your carbon! 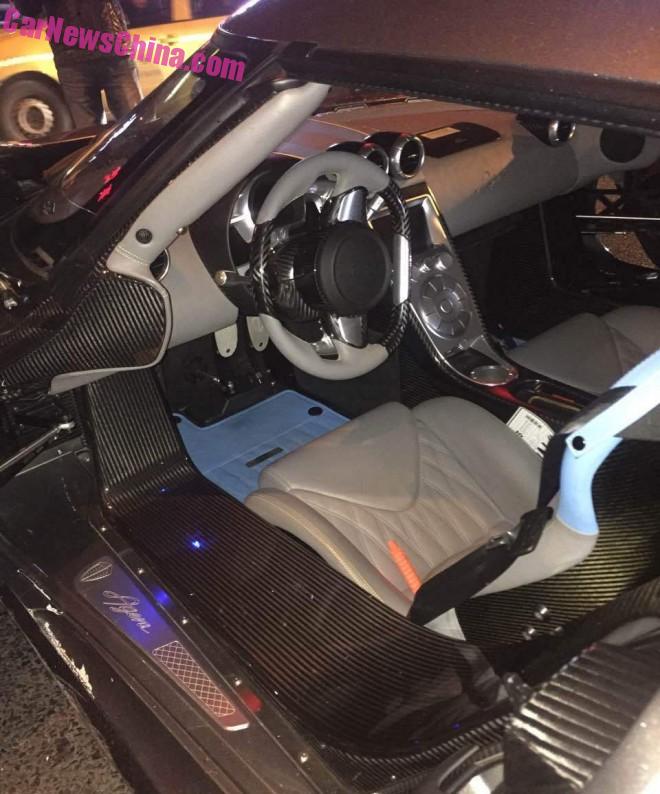 No visible damage inside. Oddly, the airbags didn’t deploy. Interior with beige seats, hmmm…, and some blue, including the floor mats. We love blue floor mats! 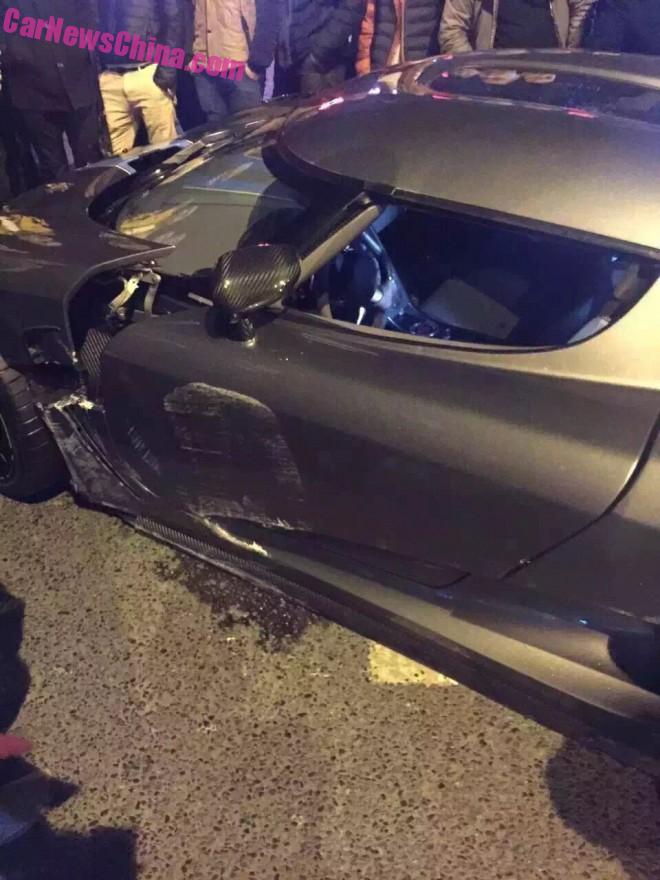 Damage at the door, front fender, and something is leaking. 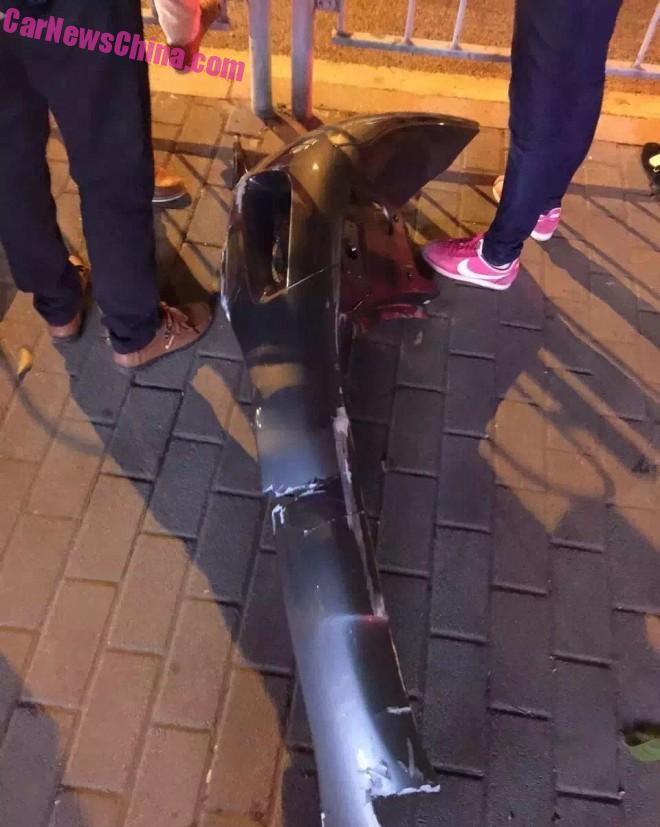 Some of the curious onlookers managed to snatch away parts before the cops arrived. Here we see a man in Pink shoes standing next to the front bumper. 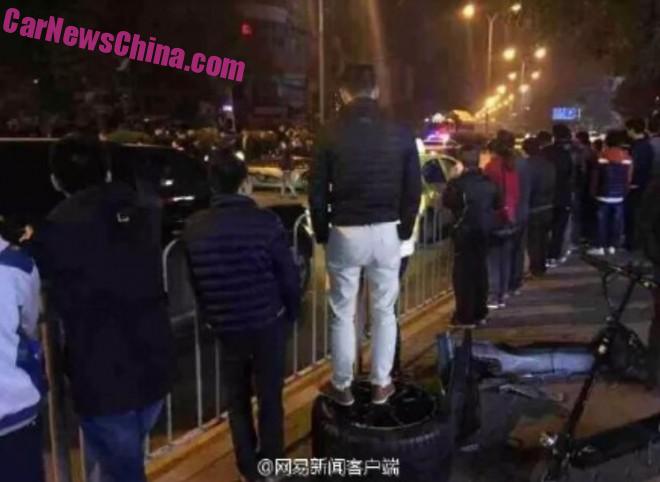 And here stands a man in white trousers on the left-rear tire, parts of the suspension on the right. The impact happened some hundred meters back, on this side of the road. The ‘Egg can be be seen on the other side, where all the locals are looking at. 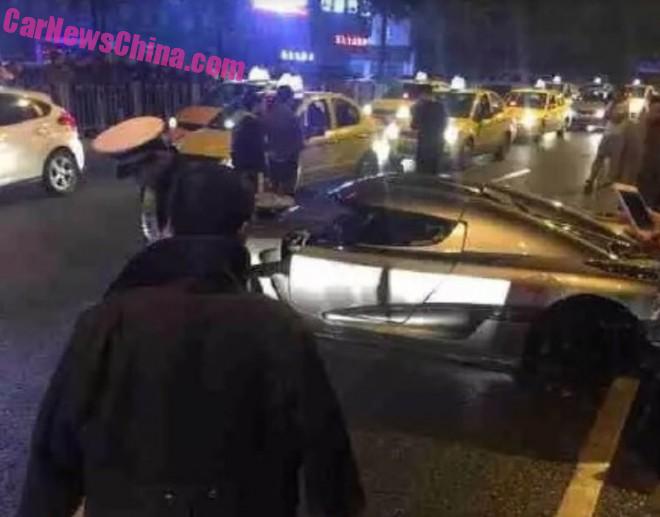 Police forces secure the perimeter. “Nothing to see here!, just another Supercar Crash!” 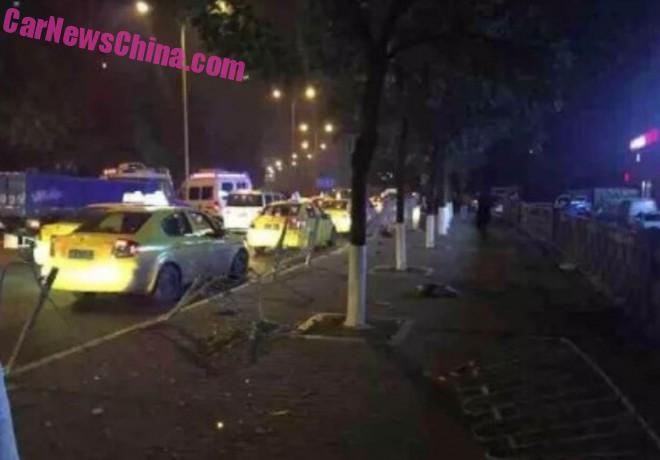 This is where the initial impact happened. Chinese media say a whole ten meters of fence was destroyed. 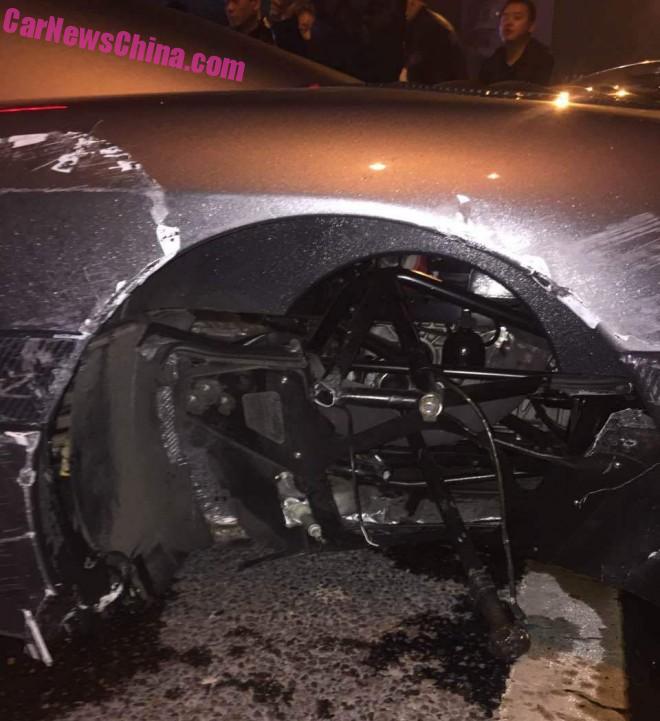 Wheel came off, suspension damaged. This is going to be an expensive repair. 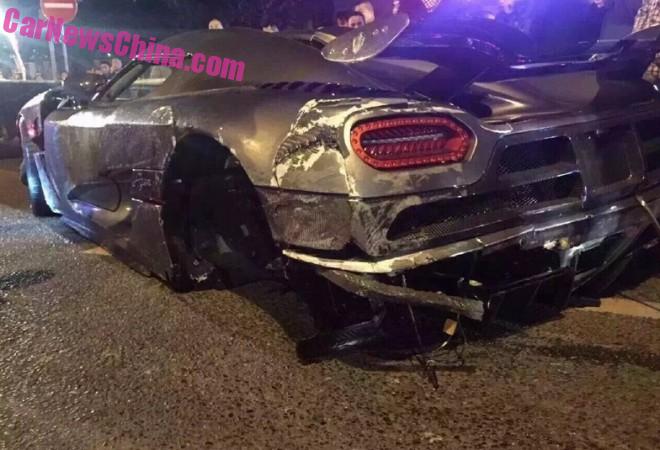 She will need a lot of new carbon. Diffuser seems damaged too. 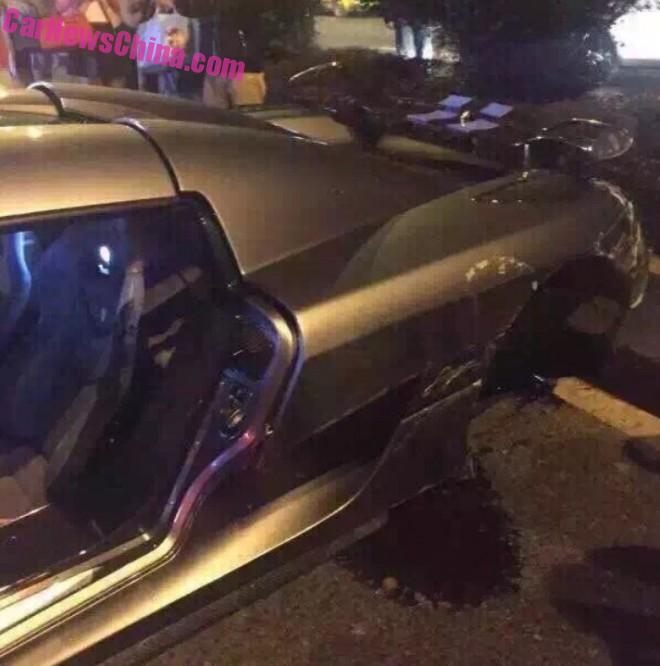 Leaking more liquid. This Swedish baby is going to get as dry as a desert. 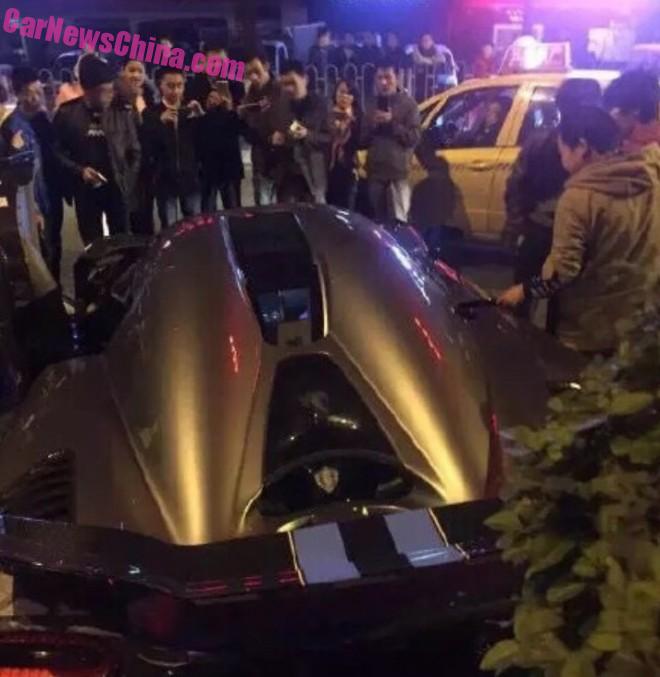 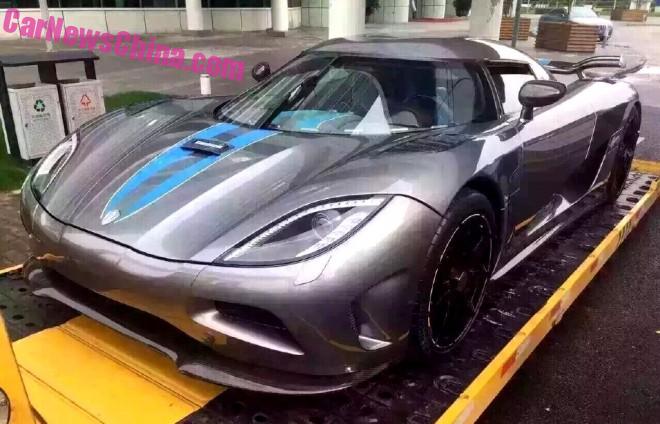 The Agera R in better days. It was delivered to Chongqing in late 2014. Before that it was part of the collection (scroll down) of Beijing supercar broker FFF Automobile. The obsessive fan site Koenigsegg Registry has another photo of the car at the FFF shop, and they also say it is chassis number #82. 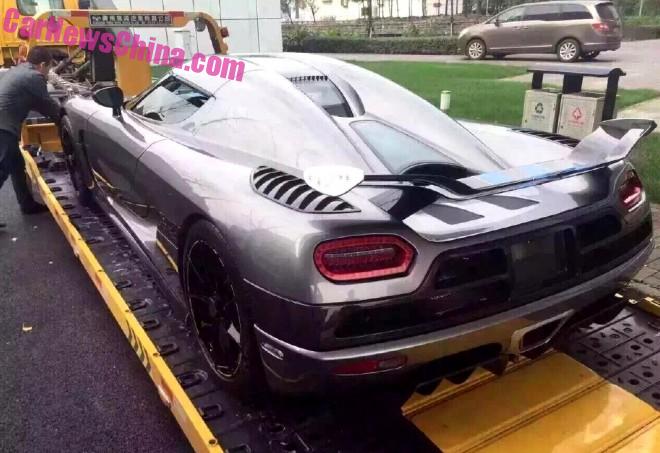 The Koen’ will be shipped to Sweden for a complete fix and will hopefully look as good as new again when it returns to the Middle Kingdom in the not-too-near future.