More on the TechRules A96 Turbine-Recharging Electric Vehicle from China 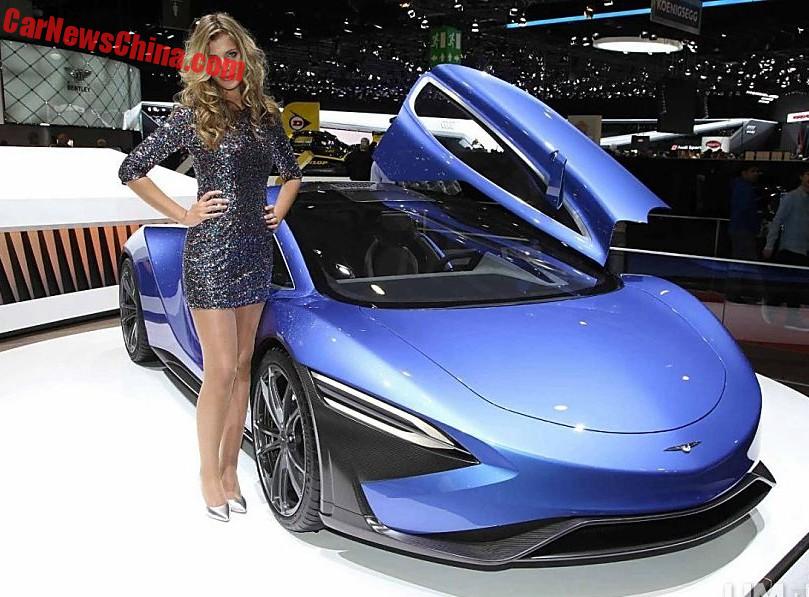 The Chinese company TechRules surprised the Geneva Motor Show with a  Turbine-Recharging Electric Vehicle (TREV) supercar in race and in road form. Earlier on we showed you the GT96 race version, and now it is time for a closer look at the A96 road car, plus more photos of the technology.

The road version is a concept just like the race car, but they are both surprisingly close to production. TechRules hopes to start a limited initial production run in 2017, and interestingly enough they are considering to build the cars outside of China, with Italy as one possible location. 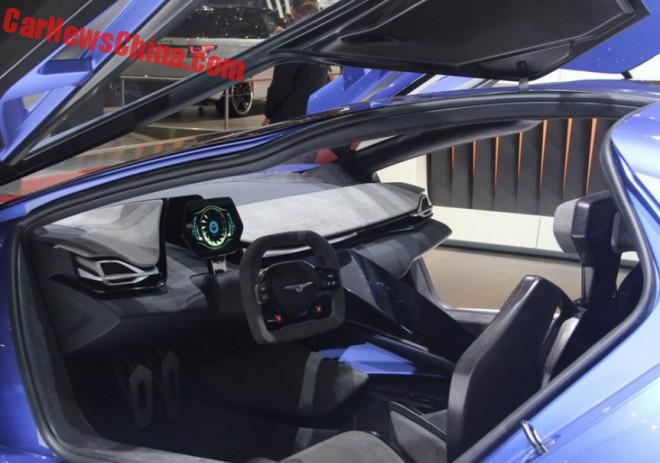 The A96 has a fully functional interior with a racy steering wheel and a space travel instrument pod. 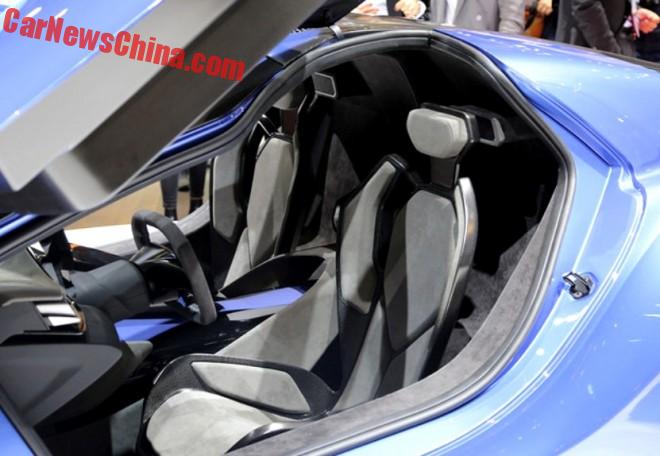 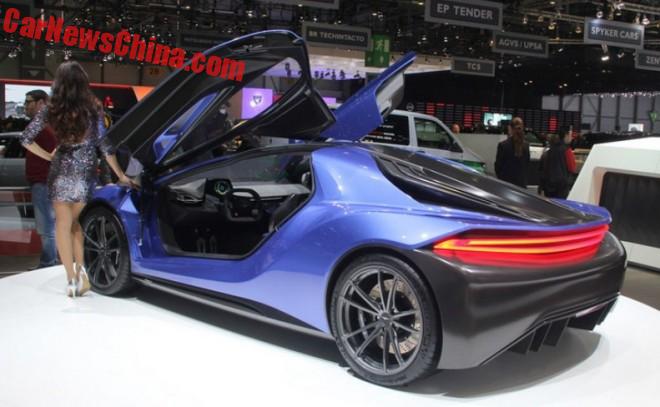 The road version has to do without the wild wings on the race version, but gains a beautiful ass with a rear-wide light unit, a black bumper, and a hefty diffuser. 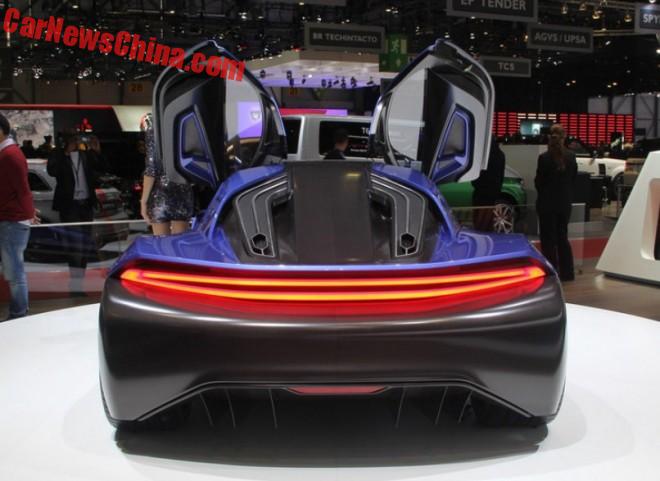 ‘Techrules’ stands for Tech and Rules. The slogan is ‘New Tech New Rules’. The company is based in Beijing and its Chinese name is ‘Tengfeng’ (腾风). They don’t seem to have a website yet.

The company is owned by another outfit called ‘China Zhiyue Tengfeng Technology Investment Corporation’ (中国至玥腾风科技投资有限公司), also known as TXR-S. They do have a website, but only for the mail.

This company is involved in compressed-air technology for cars, specialty fibers, renewable energy, and aerospace technology. They have close ties with the state-owned space conglomerate CASIC, which is run by the army, and with ChemChina, a large state-owned chemical company.

TechRules is thus well connected and likely well funded, and that makes the possibility of seeing the A96 on the road not unreal. Furthermore, the GT96 race version has been on track already, for a test drive at Silverstone in the United Kingdom. 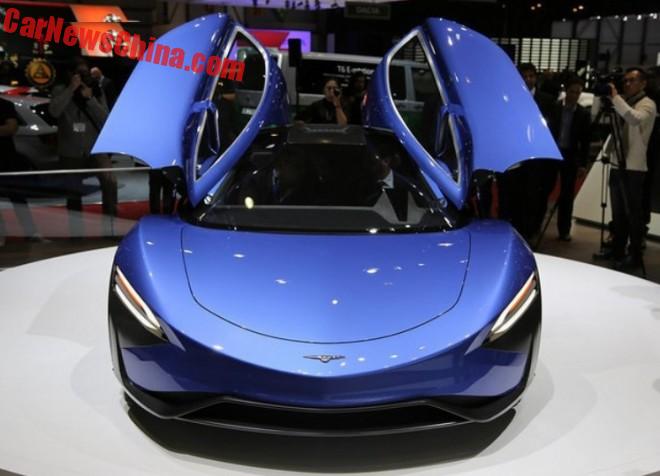 TechRules logo on the nose. 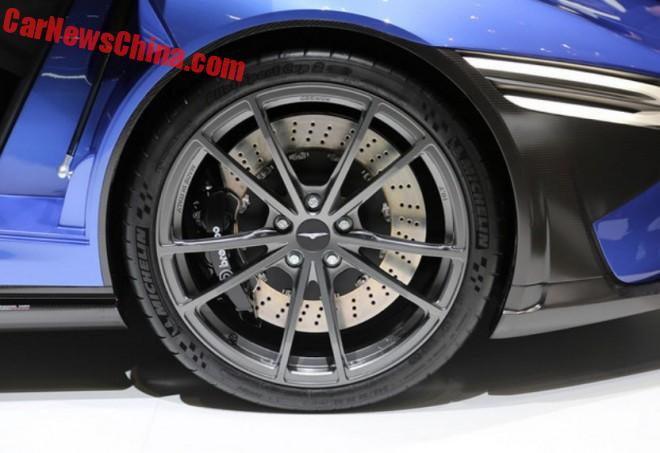 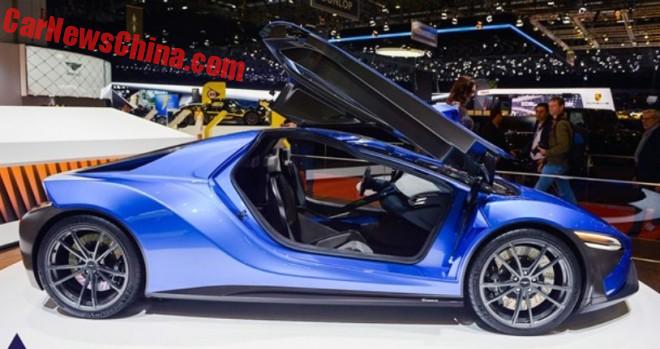 Time for tech! The GT96 and A96 share the same powertrain. TechRules does not list any differences in specifications of capabilities.

The A96 has 1044 horsepower and… 8460 (eight four six zero) newtonmeters of torque. Zero to one hundred takes 2.5 seconds, top speed is 350 kilometer per hour, and range is 2000 kilometers. Range on pure-electric power is 150 kilometer. All specs as claimed by the manufacturer.

The A96 comes to these incredible numbers by combining six electric motors with a gas turbine range extender. Battery is a 720W/20kW lithium-maganese-oxide unit. Each rear wheel is powered by two electric motors, and each front wheel by one. Each motor weighs only 13 kilo. Each wheel has its own inverter. The gas turbine does not directly power the wheels, it is only used to generate electricity for the electric motors. The turbine can run on natural gas or methane gas.

The company claims a ‘theoretical’ fuel consumption of 0.18 liters per hundred kilometers, but that will only work if the turbine spins at maximum power all the time. In normal circumstances fuel consumption will be 4.8 liters on one hundred, says TechRules.

The body of the GT96 is made out of carbon fiber. The vehicle weighs 1380 kilo, but TechRules say they intend to bring that down to 1000. 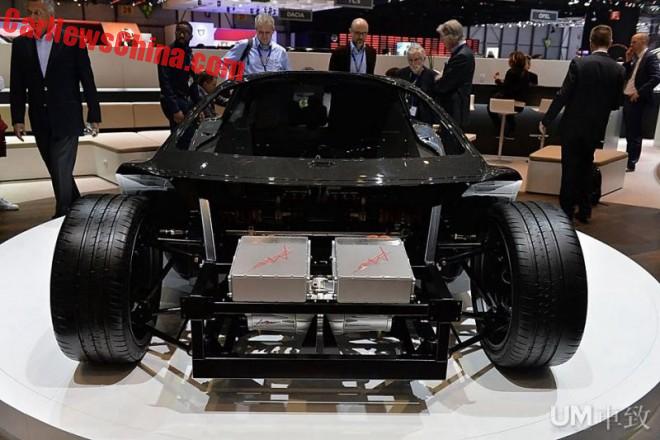 TechRules had a chassis on the stand too. It appeared to be largely a mock-up. This is the front of the car. Two inverters on top of two motors. The motors thus are not inside the wheel. 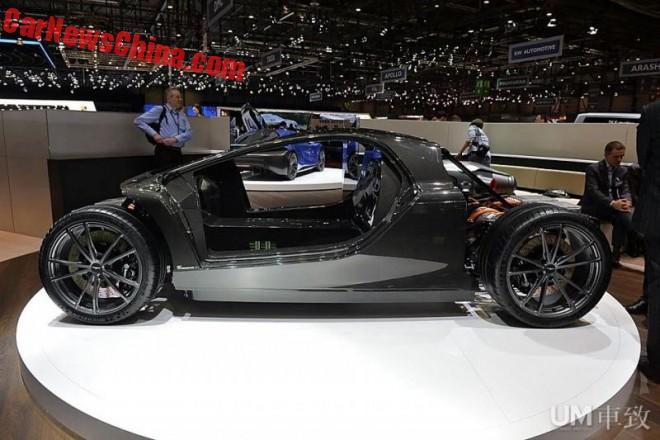 The carbon fiber tub. The battery pack is located in the center tunnel. 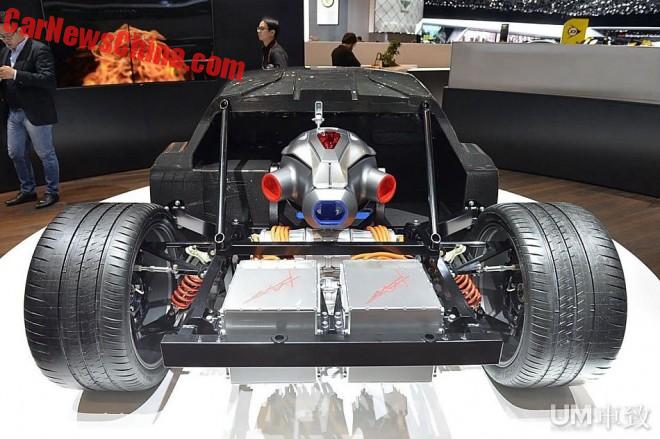 The rear. The space travel unit on top is a model of the turbine, below the turbine are the four electric motors, two for each wheel, and behind those, in the foreground of the photo, are the inverters.

The brand of the inverters is Mavel, made by an Italian company called ‘Mavel Power Train’ (web), 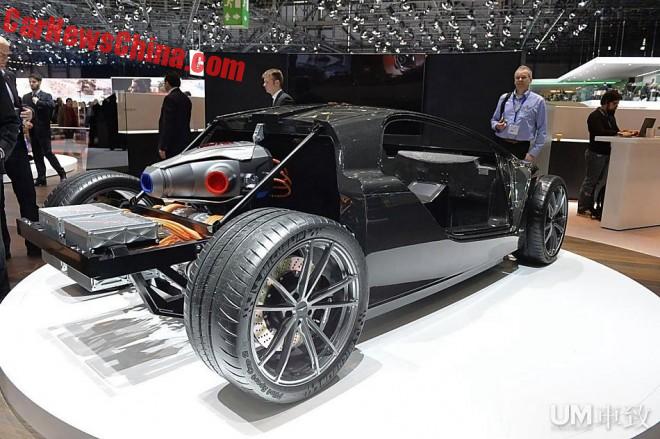 There seems to be a lot of unused space under the inverters. 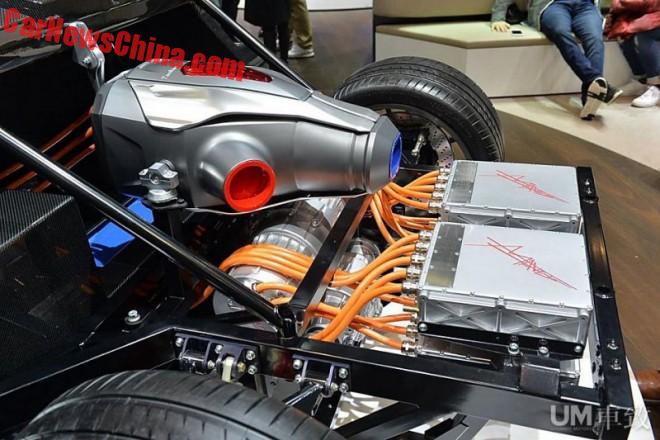 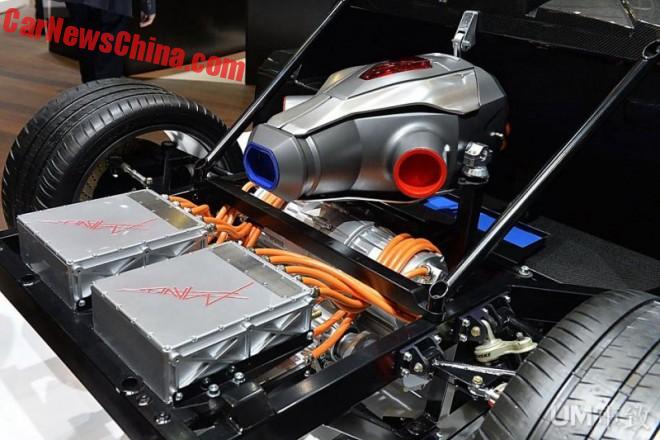 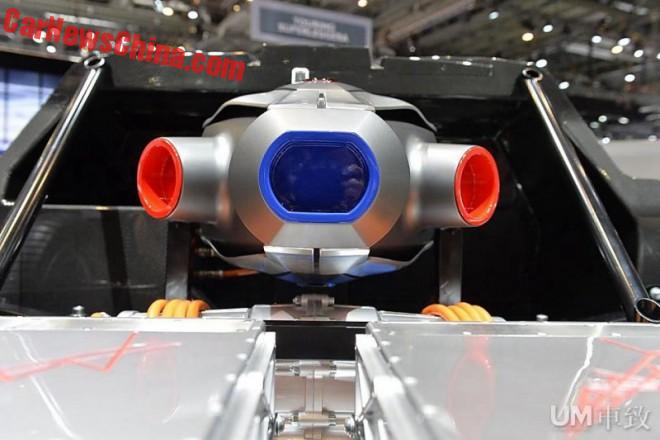 “This is Mars talking to earth…”. 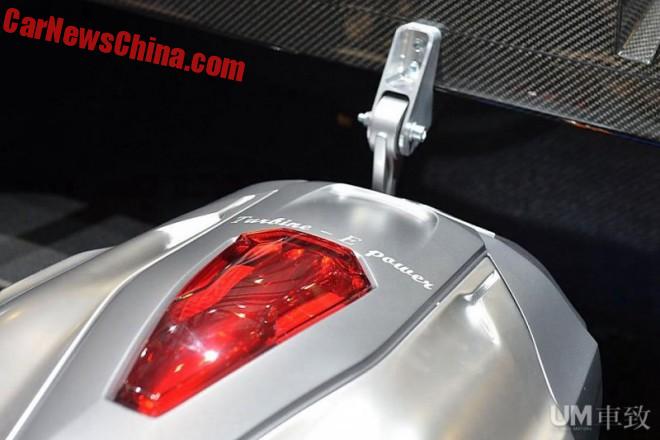 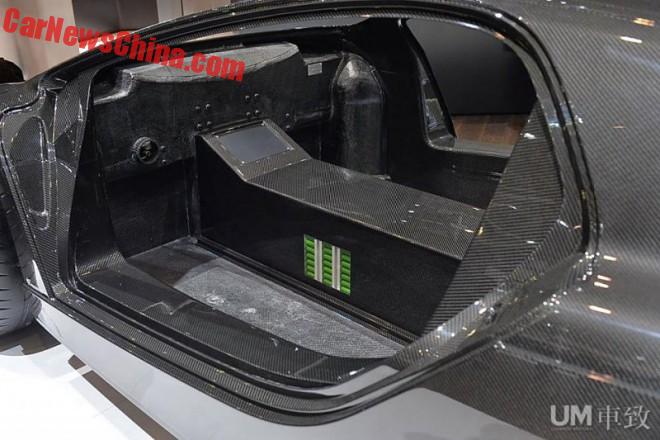 The bare cabin with a cutout showing a part of the battery pack. 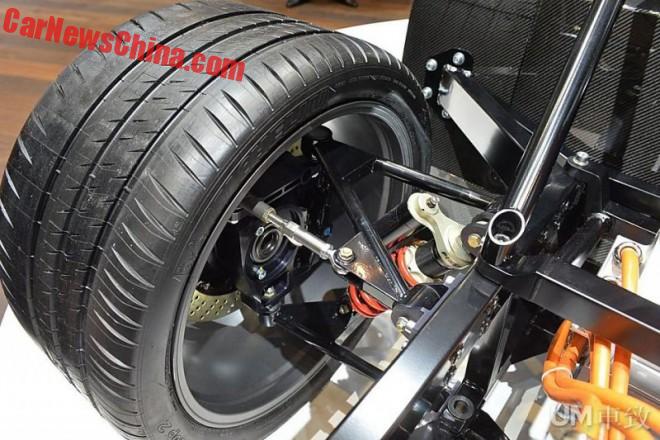 Suspension. There is no connection between the motors and the wheel on this particular chassis. But there is hole in the center of the wheel, likely for an axle. 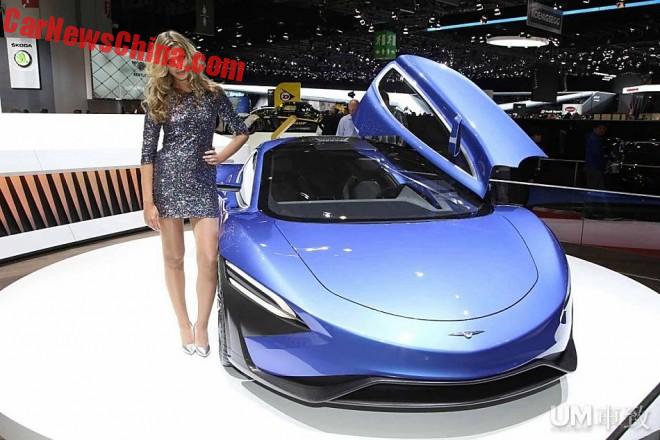 And why keeps this little lady hiding behind our logo..?

Via: Xgo, Weifengtang, and Sina.