Venucia T90 Launched On The Chengdu Auto Show In China 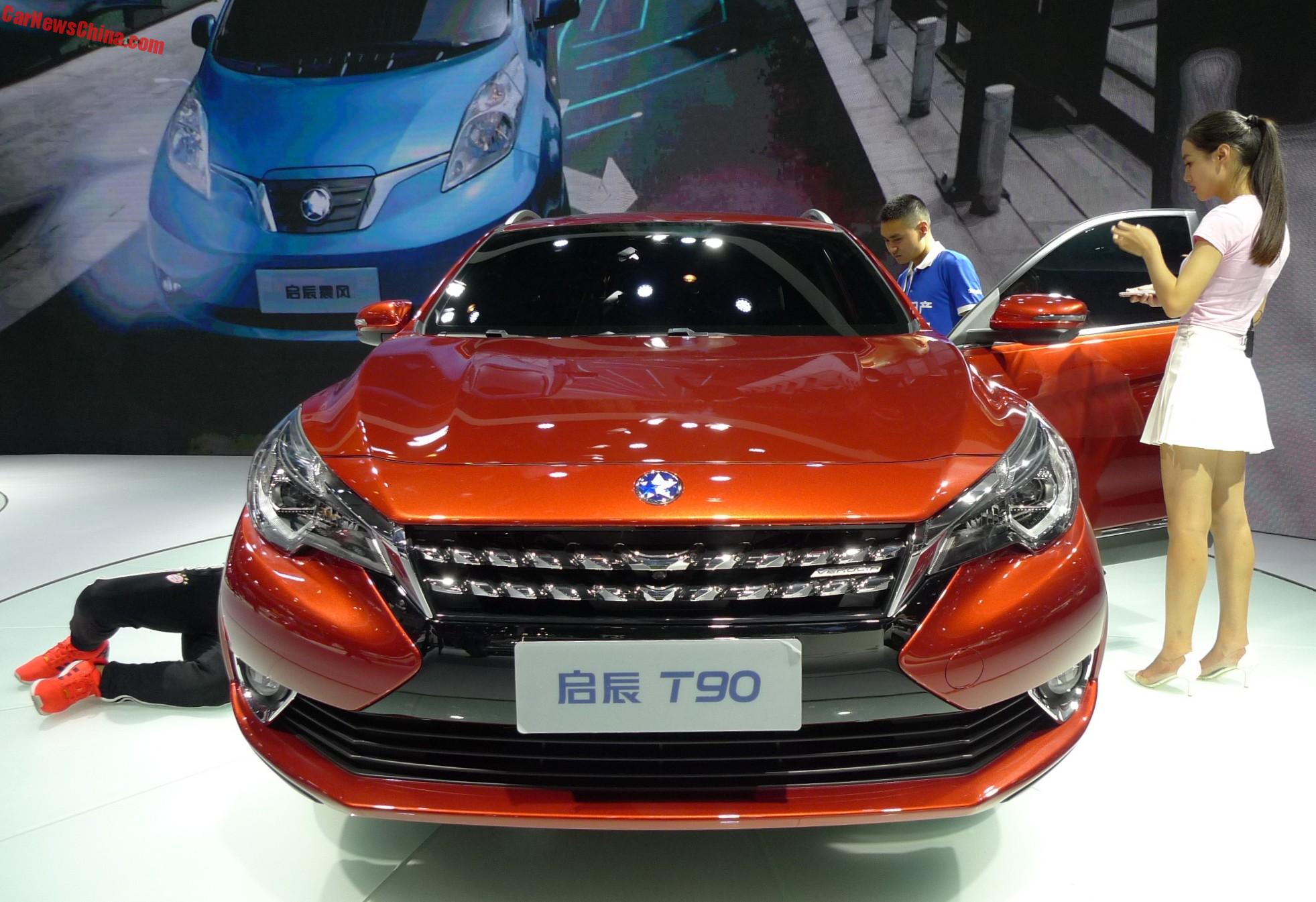 What is going on here? Well, the man in red shoes is a corporate spy taking photos of the underside. The girl in white shoes is a internet-TV hostess, and a hot one at that, waiting for her shoot. The man in blue shirt is a camera operator for the internet-TV hostess, taking some shots of the car. The car is the brand new production version of the Venucia T90, as it was launched on the Chengdu Auto Show in China.

Daring design and a daring fastback body style, we like the T90 a lot. Good name too.

The T90 is the new flagship of the Venucia brand, it debuted in semi-concept form on the Beijing Auto Show and it is the production version of the 2015 Venucia Vow concept. 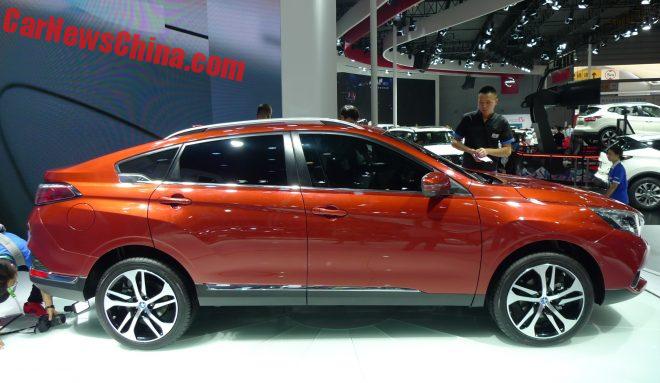 There on the left is that spy again. He has a very strong light bar, lightening up the undercarriage, so he can take proper photos. Spies shouldn’t wear red shoes. It betrays them. This man was working around the car for about ten minutes. Venucia staff noticed him, talked about him, but did not stop him. Venucia of course employs spies who do exactly the same thing. All car makers do. 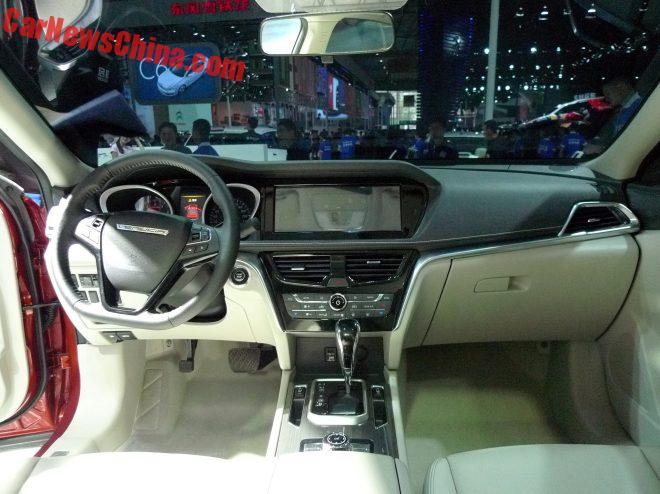 The interior looks very good. The touch screen is larger than anything Nissan has. Chinese car buyers need big touch screens, and bigger ones, and Venucia gives. The steering wheel has a flat bottom for sporty, and the center tunnel has a nice shiny control knob. 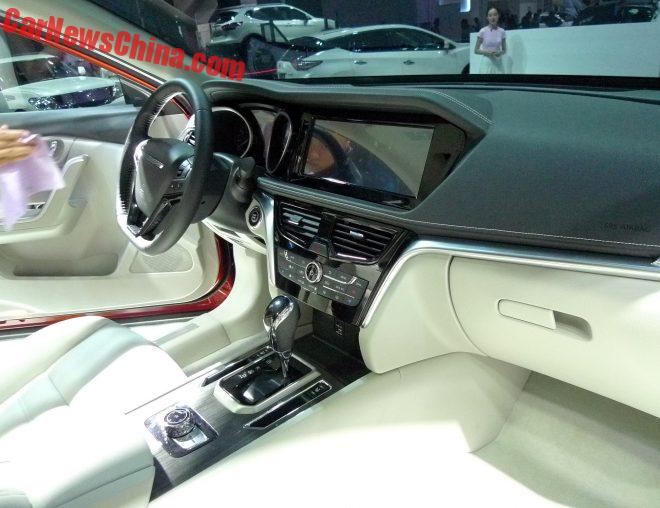 The only letdown is the large gear lever, which looks too much tractor. There is another problem too, a bigger problem. Earlier on we heard the T90 would get the same engines as the Murano, a 186hp 2.5 and a 245hp 2.5 hybrid.

That now was not true. The T90 will get another engine entirely. And sadly, the news is bad. The T90 will get a rather old Nissan 2.0 petrol with a paltry… 139hp That is barely enough to bring the big T90 up to speed. And the gearbox, oh oh, is a CVT.

Venucia could have the big screen but not a new engine. Too bad. That will hurt sales. 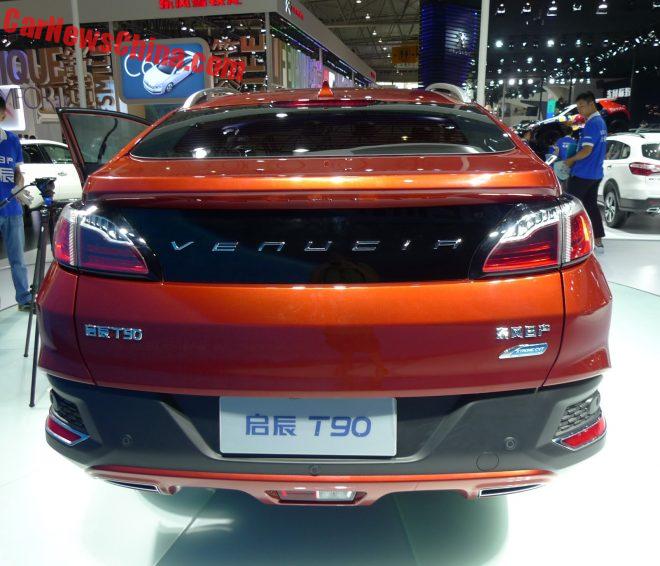 The rear is ultra cool. Big integrated spoiler. Black panel between the lights with the Venucia name on it, and a big black lower bumper.

The poor car on stage was never left alone. When there was no spy or no filming there was a stressed-out man cleaning. I got stressed out too by all that moving and doing, and by thinking about that 139 horses, so I left the stage and moved on.