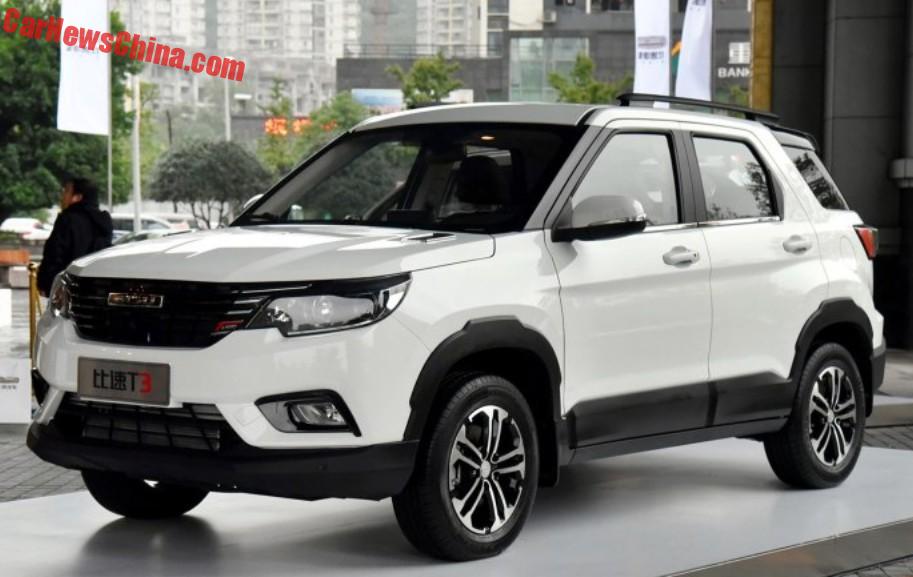 The brand new Bisu T3 has been launched on the Chinese car market, looking trendy there in black and white. Price starts at 74.900 yuan and ends at 86.900 yuan. The T3 is a compact SUV, it is manufactured by a new car company called Chonqing Bisu Automotive Corporation, based in the great city of Chongqing in central China.

I love red turbo badges. Even if they are only partially red. Like this one, with a red T. The world needs more red turbo badges. Happily, Chinese automakers are adding shiploads of turbocharged cars to their lineups, and they all have turbo badges, and a lot of them are red.

The Tisu T3 is indeed powered by a turbocharged engine; an interesting 1.3 liter turbo four with 132hp and 185nm, mated to a five-speed manual, sending horses to the front wheels. 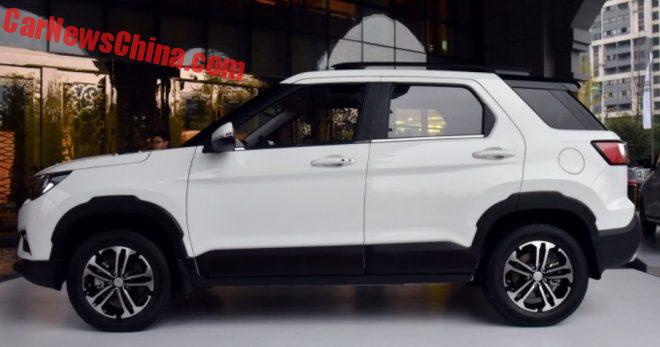 ABD-pillars in black, forcing the eye to focus on the white C. Roof rails are black too, and look properly useful. Design of the black wheel arches is nice, and somewhat daring, mixing round and straight shapes.

Bisu is a subsidiary of the Beiqi-Yinxiang joint venture, which sells cars under the Huansu brand. The partners in Beiqi-Yinxiang are Beijing Auto (Beiqi) and the Yinxiang Motorcycle Group.

The Bisu T3, formerly known as the Bisu S25, stands on the same platform as the Beiqi-Yinxiang Huansu S2 and Huansu S3. The brand names are similar too: Huansu = 幻速 and Bisu = 比速. 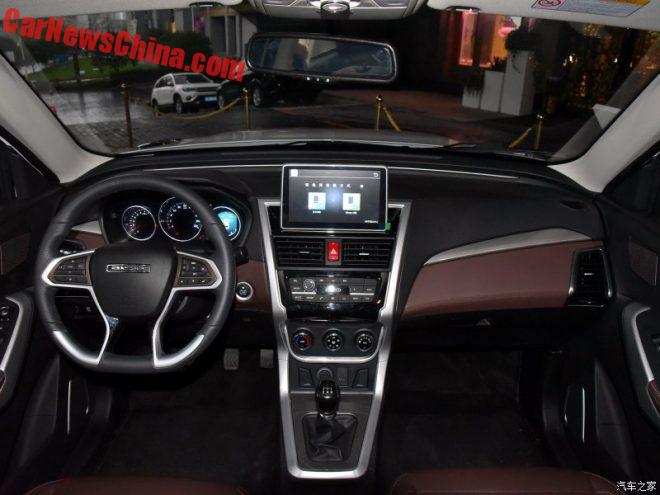 Interior is nice, albeit with a lot of colors and different materials. Start button to the right side of the sporty steering wheel. The area around the gear lever looks a tad too cheap. The instrument panel has a… 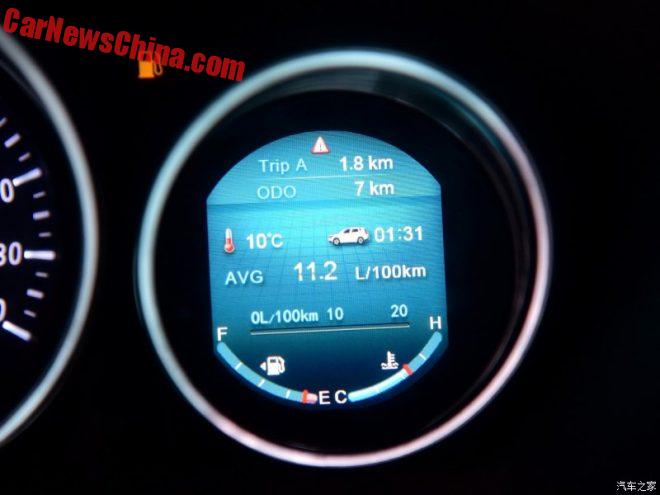 …. ultra cool dial which is actually a small blue TFT screen, showing some data some people care about. 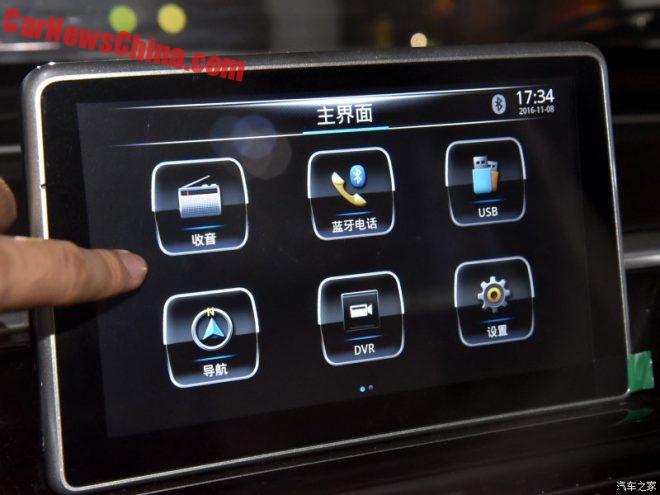 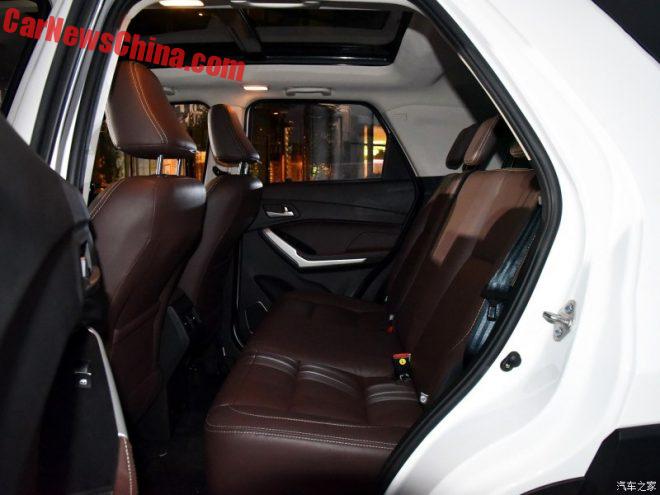 Bench looks comfortable, there seems to be enough space for two and a half. 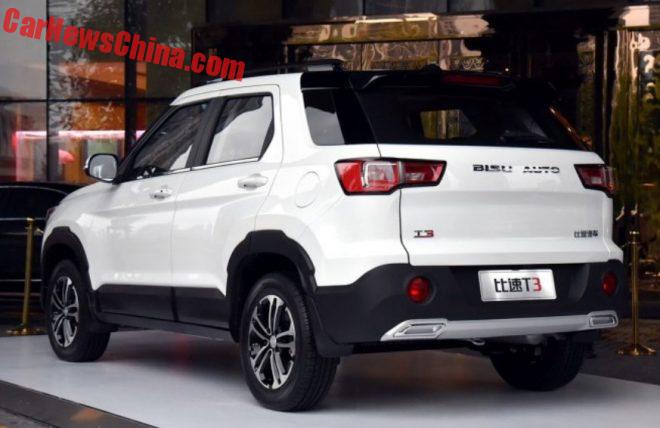 Lights are just small enough for fashion. Round fog lights a nice touch. Less nice are the fake exhaust pipes. Lot of cars got those, but Bisu didn’t even bother to paint the inside black, so it just looks too fake here. Check: 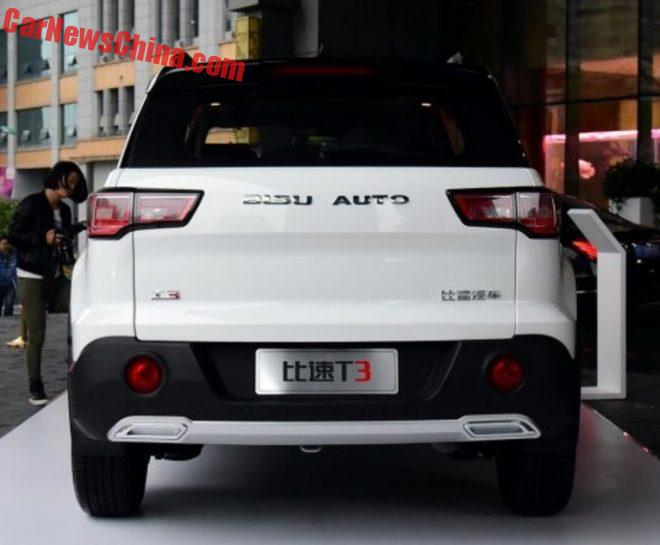 The T3 badge is nice again. The 3 is in red. The T3 name does however not refer to the turbo. All Bisu SUVs will have a name starting with a T, turbo or no turbo. The next SUV, it will come as no surprise, will be called the T5, scheduled for launch in late 2017. 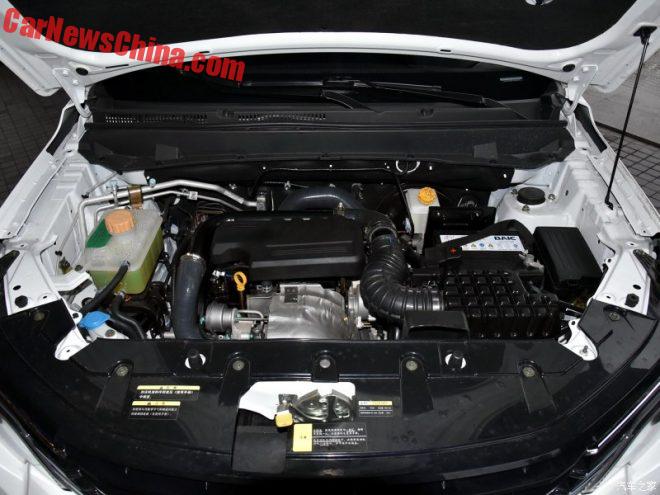 Bisu didn’t care about an engine cover. Well, at least we can now see the good looking air filter, housed in a box that one could almost call trendy. 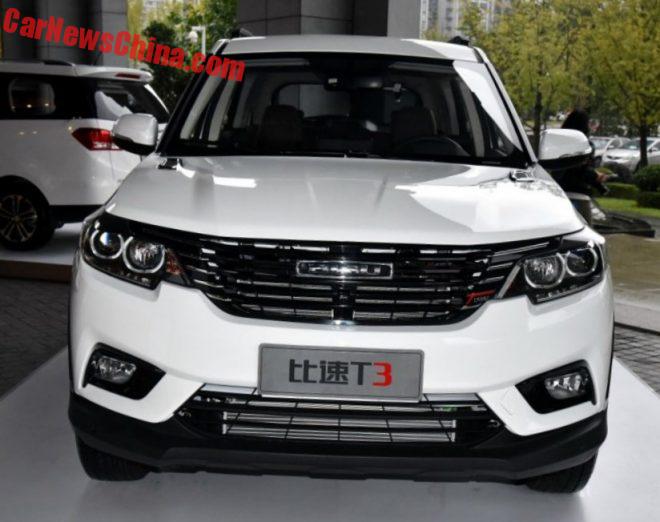