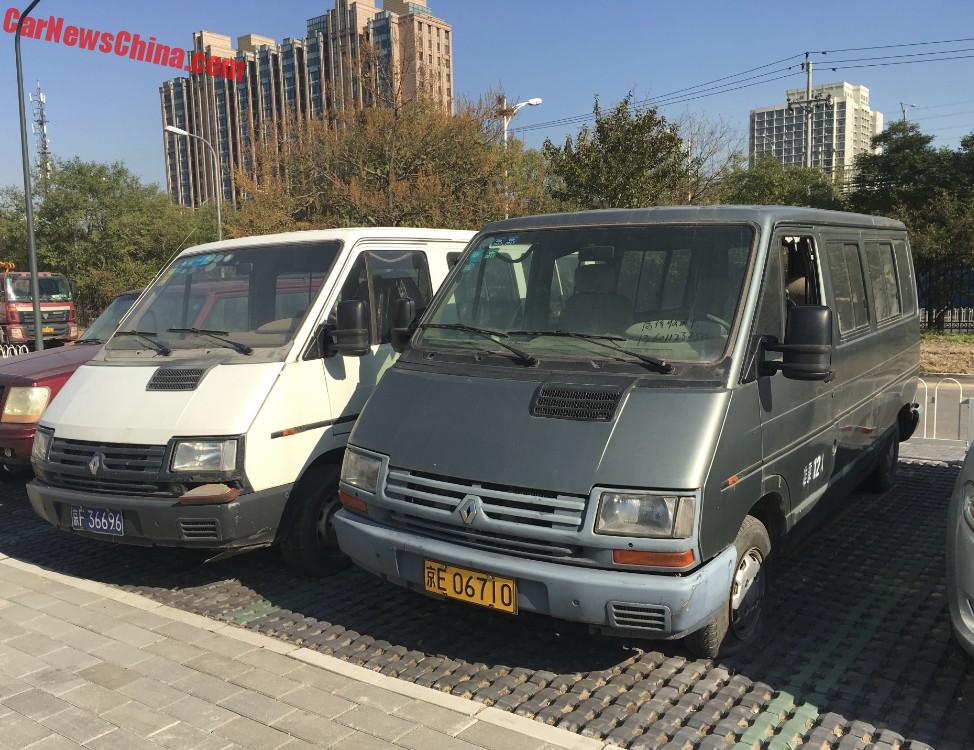 Today in China Car History and Spotted in China the Sanjiang Renault Trafic, seen here on the double at the Tsinghua University in Beijing, not far from where I found a Hongqi CA774 prototype.

The Renault Trafic is a light-commercial vehicle. The fist generation was manufactured in France from 1980 until 2001 with a major facelift in 1990. It came in various forms; van, pickup truck, and minibus.

The Trafic was manufactured in China by the Sanjiang Renault Automotive Company, , Sanjiang-Renault for short, a joint venture between the Sanjiang Aerospace Group and Renault. The Chinese had 55% of the shares and the French 45. The joint venture deal was agreed on in 1993 with a total investment of just 98 million U.S. dollar.

CKD production started in 1995 with kits imported from France. In the meantime a factory was set up and full-vehicle production began in 1998. The factory had an annual capacity of 15.000 cars a year. Sadly, they never reached that number, not even close. Between 1995 and 2004 only 4112 Trafics were made, and that included the initial CKD operation. The Espace MPV was added to the lineup in 2000. The Espace was CKD only, there was no full-vehicle production. It wasn’t a success either. Only about 2000 units were made from CKD kits.

However, the joint venture itself was not disbanded. It was mothballed. The joint venture had the valuable production license. In China every company needs to have a government issued license to make cars, and these licenses are very hard to get. Disbanding the joint venture completely would also mean giving up the license, and both companies were sensible enough not to let that happen. Sanjing Aerospace didn’t leave the automobile industry, they set up a large part making business that developed and manufactured parts for the booming industry, including gearboxes and even engines.

In the late 2000’s Renault started talking to Dongfeng Motors about a new car making joint venture. The negotiations took ages and the government was not inclined to hand out a new license. At the time there was a lot of worry about overcapacity, and the government wanted consolidation instead of new car makers. Renault and Dongfeng then came up with an ingenious deal were Dongfeng and Sanjiang Aerospace would agree to a broad cooperation agreement. Part of the agreement was the purchase by Dongfeng of Sanjiang’s 55% stake in the mothballed Sanjiang-Renault joint venture.

The stake included the precious license and Dongfeng and Renault were free to start their joint venture. The government approved; there was a valid license and a bit of consolidation. Win win, as the Chinese would say. After more difficult negotiations the Dongfeng-Renault joint venture was finally born in 2015, based on the original Sanjing-Renault license. The old factory were the Trafic was made is now being used by Sanjing and Dongfeng for making gearboxes. 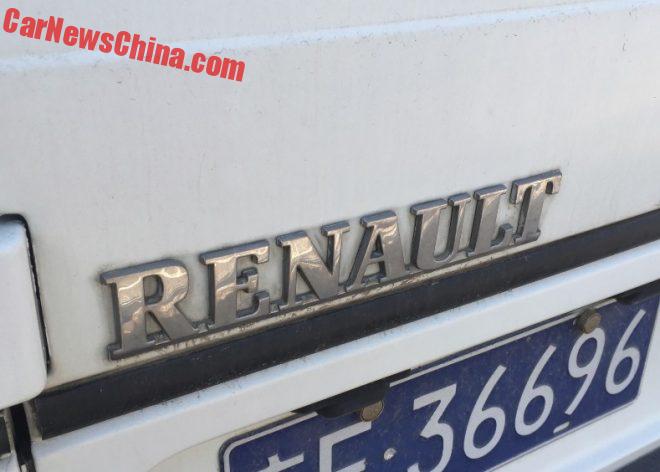 Back now to the Chinese Trafic. They made only the minibus variant in short and long wheelbase versions. The van and pickup truck variants were not made here. They also sold an ambulance and a police version based on the minibus.  Power came from the famous ‘Douvrin’ four-cylinder petrol engine. The Trafic had the 2.2 liter double-barrel carburetor 8V version, good for 101 horsepower. Gearbox was a five-speed manual.

It apparently was and is a strong car.They made only 4112 units but a lot of them are still around, and many are offered on second hand car websites. The best I found is this very neat long-wheelbase car from Liaoning Province, offered for only 30.000 yuan. 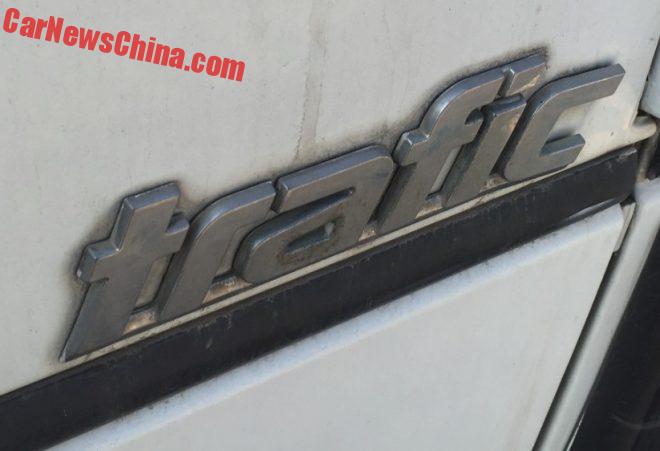 The Trafic’s Chinese name was 塔菲克, Tafeike, a sound-translation of Trafic. They did not use the Chinese name on the car, using only the original name. 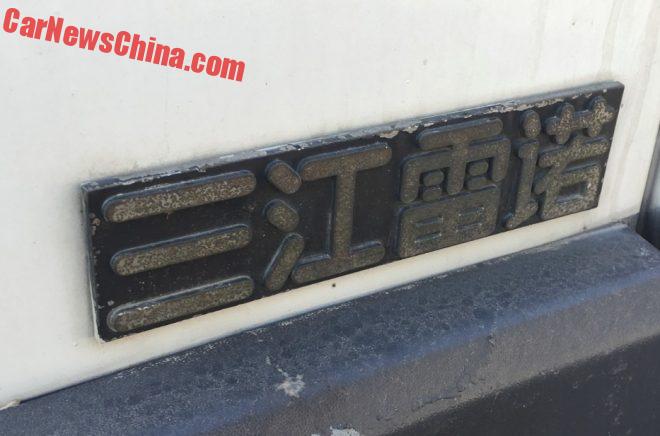 They did however add a badge for the joint venture; 三江雷诺, Sanjiang Leinuo, and Leinuo is the Chinese name of Renault. 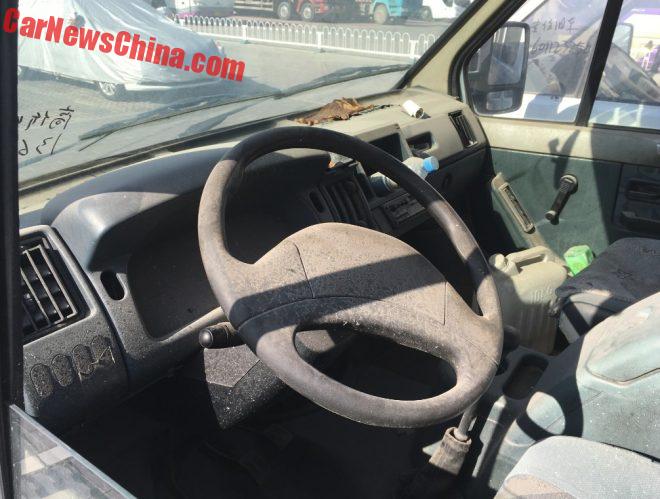 The interior was exactly the same as the European Trafic. This is inside the gray car, where the window was open. Everything is very dusty and dirty but otherwise not in a bad shape. 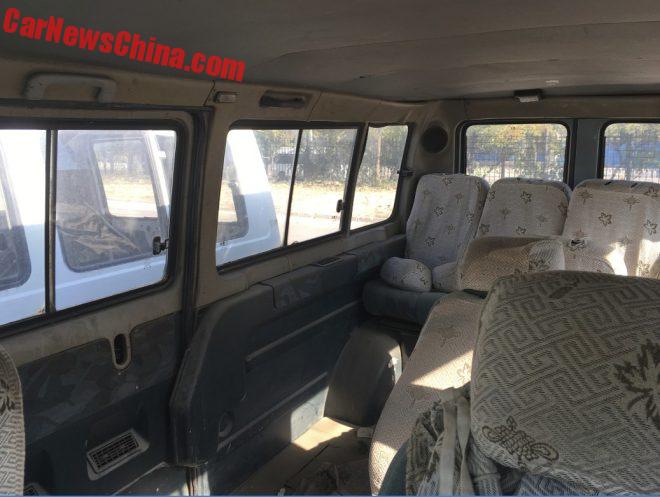 Seat covers are a later addition. Sliding door on the left. 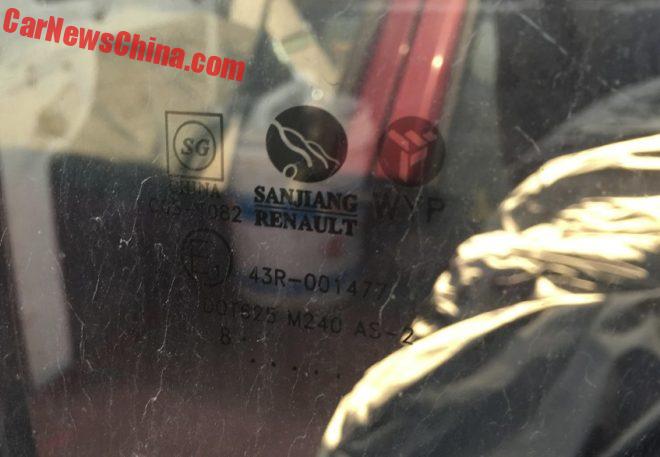 The SG China and Sanjing Renault badges on the window, showing that this was a full-vehicle production car. The CKD cars had their windows shipped in from France. The round logo is from Sanjiang. The lines represent the three rivers from the Sanjiang high plateau region where the company was named after. 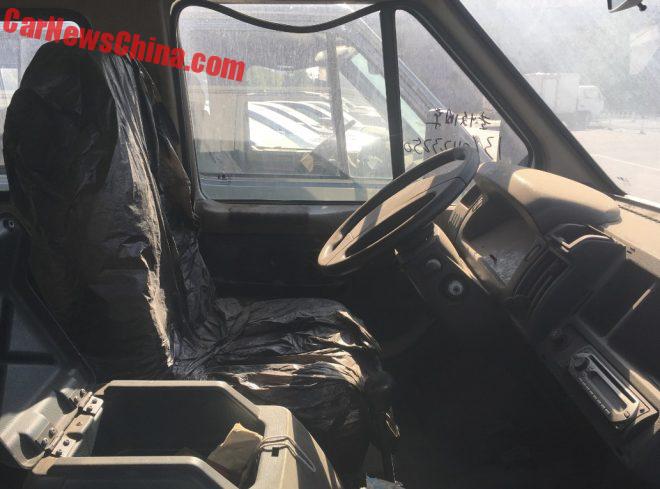 The interior of the white car. Seats covered with garbage badges and a after-market CD player instead of the original radio-cassette player. 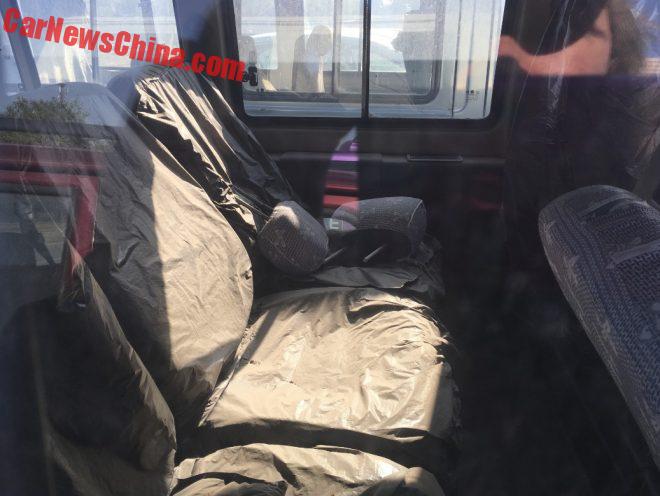 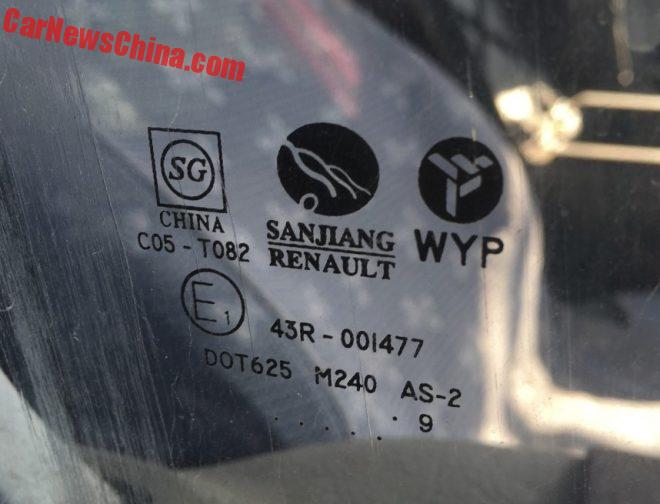 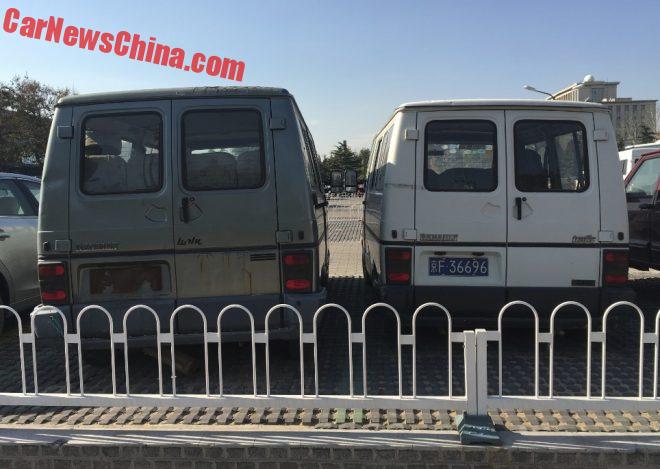 Why exactly Sanjing-Renault failed is disputed. Some say the Trafic was too expensive compared to the local Chinese competition. Others say Renault didn’t put enough cash in marketing. And other again think the reason was a lack of dealers. We think all reasons are true, and also suspect some intercultural Chinese-French battles behind the scenes. 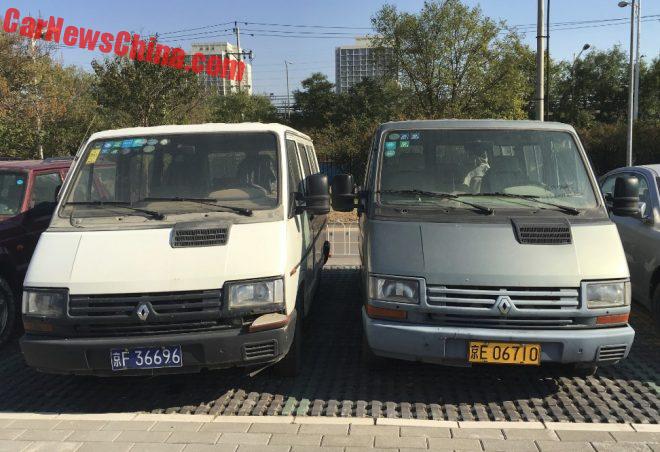 Simple black grille for the white car, body-color grille for the gray car, likely a high-spec variant, although I didn’t see any notable differences inside. 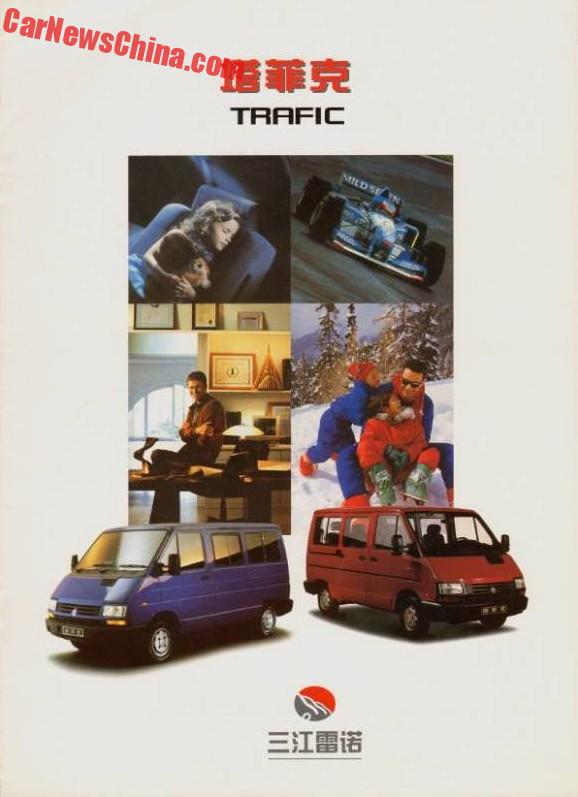 An original Chinese brochure, showing the Chinese name of the Trafic, the joint venture name, only non-Chinese people, and the Benneton-Renault Formula 1 car. It seems that marketing was a bit of a problem indeed. Which Chinese transport company is going to get excited by a Frenchman sitting on his desk..? 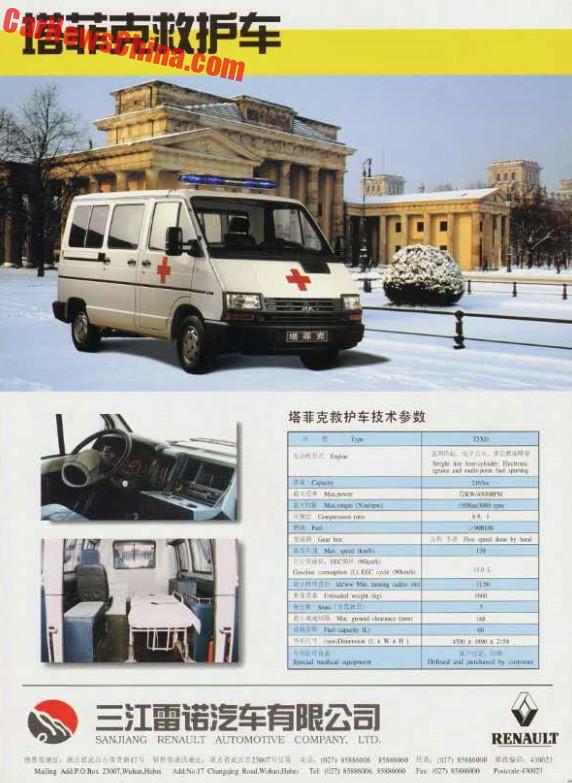 The official ambulance version nicely photo-shopped onto a snowy street. 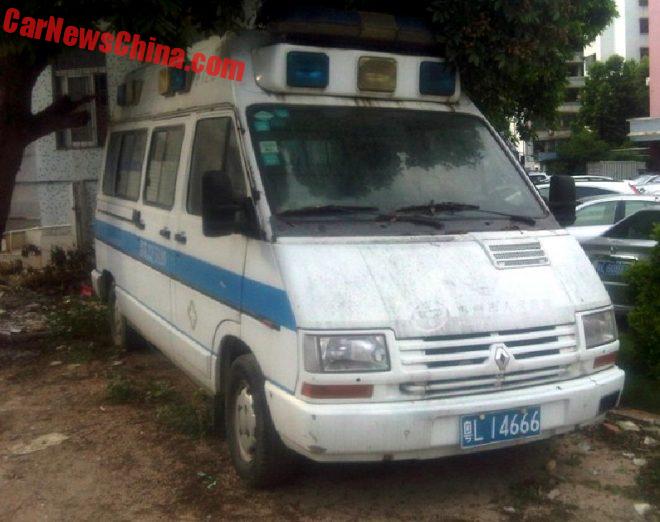 This is another ambulance, with a high roof and an impressive set of lights. It was likely manufactured by a separate specialty-vehicles company, based again on the minibus. 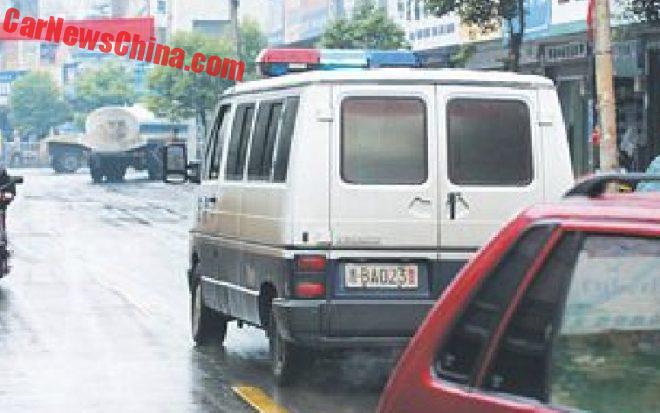 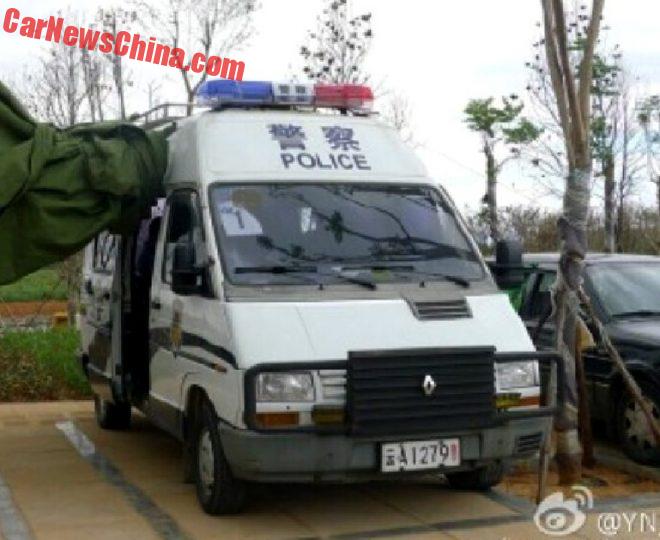 A high roof police variant with an anti-riot front end. 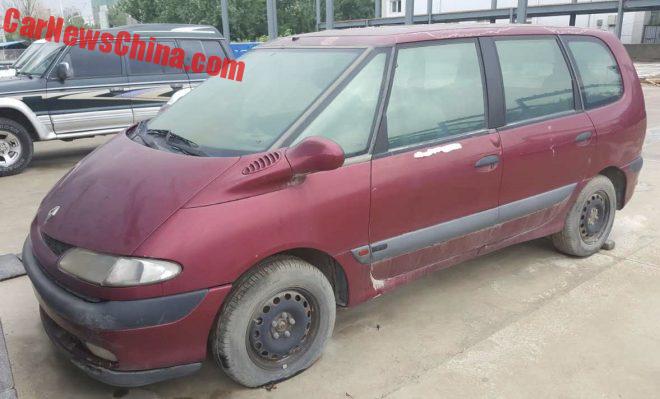 An original Sanjing-Renault Espace, as seen by Sam Faulkner. More on this red beauty in an upcoming post.

Thanks to Navigator84 for the brochure photos. Other sources: iAutos, CheXun, and Sina.