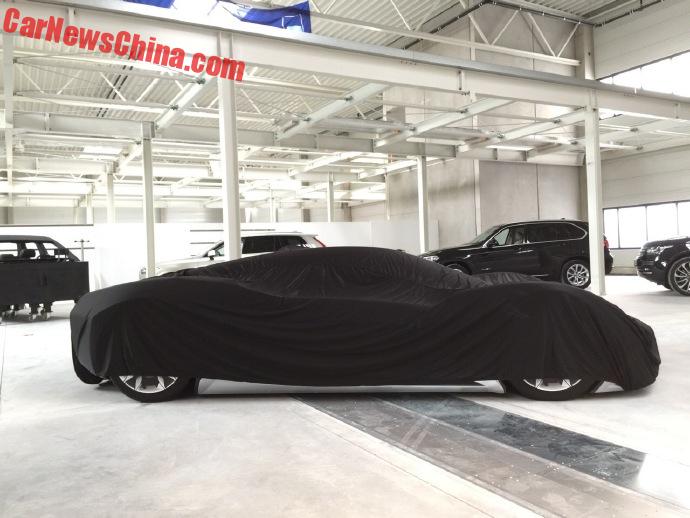 Last month NexEV launched the NIO brand and the EP9 electric supercar, which will be made in a small series for a lot of money. The EP9 will serve as a halo model for the rest of the range. The range will consists of SUVs, MPVs and a sedan.

First up are two SUVs, code named the NIO ES8 and the NIO ES9. Above photo was taken in NextEV’s design center in Germany, showing an early model of the EP9 under cover and three SUVs in the background; a Volvo XC90, a BMW X5, and a Range Rover Sport.

That is the segment where the ES8 will compete. The ES8 will be fully electric and it will have an autonomous mode. Naturally, it will be connected to all and everything and there will be plenty of apps to download. The ES8 will debut in concept form on the Shanghai Auto Show in April.

Next up is the ES6 SUV. Full electric again and it will compete a segment lower with cars like the Audi Q5, BMW X3, and Volvo XC60. The ES6 will debut in 2018.

It is however yet unclear where NextEV is going to make all those cars. The company has always said they would outsource the actual manufacturing to an existing Chinese car maker.

Earlier on we heard it would be JAC, one of the largest automotive conglomerates of China, and currently in talks with Volkswagen to start a joint venture for making… a range of affordable electric vehicles. JAC was also mentioned as a possible partner for Tesla to build cars in China but nothing has come of that.

JAC is a capable company and their electric cars are popular. They are however really cheap and miles away from the power and quality the ES8 would need. JAC would have to set up a brand new factory and develop new technology. So, one might wonder, why wouldn’t NextEV do all that by itself? And indeed we haven’t heard a thing about the JAC tie-up anymore. NextEV is likely looking for alternatives.

NextEV is a new-energy vehicle company based in Shanghai, founded by William Li, owner of BitAuto, one of the largest automotive websites of China. NextEV also runs the NextEV Team China Racing Formula E team.