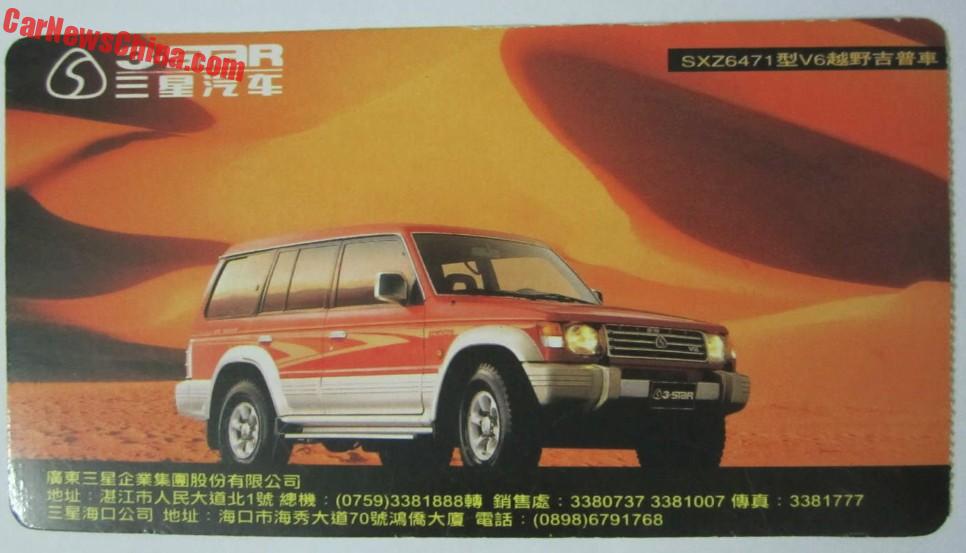 Today in China Car History the first part of the Story of Sanxing, about an almost forgotten company that made a crazy selection of cars, including the Dodge Caravan, the Mitsubishi Pajero, the Mercedes-Benz MB100, and a range of Daihatsu-based trucks.

Sanxing Auto was based in the great city of Zhanjiang in Guangdong Province. They were the Big Thing for a while, visited by big wits from China and abroad. But then it all went wrong due to politics and rivalries between Guangdong and Beijing. Their cars are virtually unknown today, descending into anonymity. This series of articles will bring them back.

Sanxing Auto was born in 1988 as an agricultural-machinery maker. Their name means ‘three-star’. Their logo is a S in a triangle,, and they also used a ‘3-star’ badge.

In 1990, just two years later, they turned their attention to cars.

The reason was a scheme set up by the local Guangdong government in 1990 to attract more foreign investment in the car industry, which in those days was a very small affair. The scheme basically made the approval of Sino-Foreign car making joint ventures a lot easier than under the strict rules set by the central government.

Furthermore, the local rules were very loose when it came to the “making” in car making. The rules allowed companies to ship in a car without the wheels/mirrors/door handles in one container, import those parts in another container, put them together in a shed, and sell them on the market as “made in China”.

The scheme also extended to complete knock-down (CKD) production, where a full kit of parts is shipped from one country for final-assembly into a car in another country. CKD was legal in China as long as import taxes were paid on the parts, but Guangdong didn’t levy any taxes on parts at all.

The scheme allowed car makers to avoid the incredible high import taxes on cars, which ranged from 60 to 80% at the time. It didn’t take long for foreign auto makers to see the enormous possibilities and many flocked to Guangdong and agreed to all sorts of deals with Chinese companies, and that of course was exactly the intention of the Guangdong government. 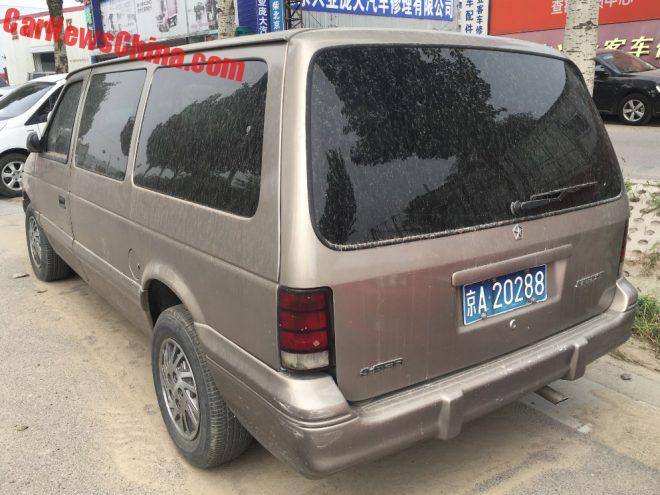 There were two kinds of deals: ‘clean’ deals between foreign car makers and Chinese car makers. Chrysler would make a deal with Sanxing to assemble the Dodge Caravan. A deal like that was fully legal at the time in Guangdong.

There were also ‘misty’ deals between foreign car traders and Chinese car makers. The trader would ship in cars as described above and sell them on in China with his Chinese partner, without any approval of the original manufacturer! A guy could come in with a 100 Honda’s, find a partner with a shed, re-assemble and sell the cars, make a quick profit, and call it a day.

Dozens of car making operations were so established in the early 1990’s. Some did the container-container thing, some the CKD thing, and some did a mix of both, like Sanxing did. However, as far as we know Sanxing was not involved in the misty kind of deals. 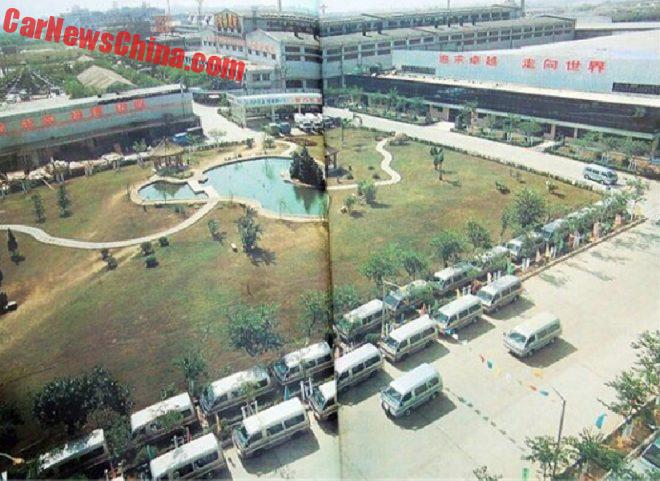 The center court of the factory with lines of Nissan Vanettes. 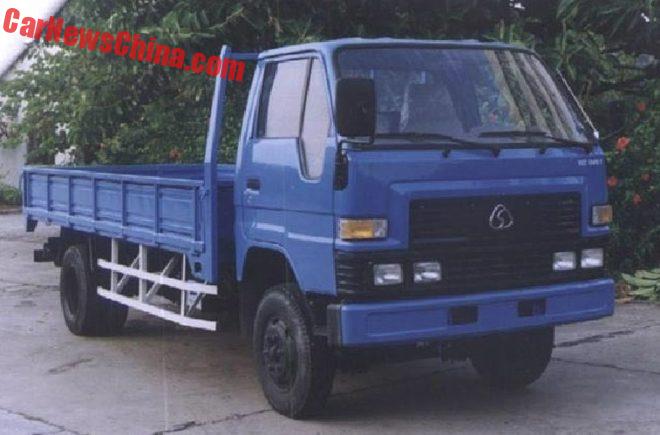 Sanxing also had a fully official license-agreement with Daihatsu for making Daihatsu trucks under the Sanxing name. The agreement with Mercedes-Benz was a full joint venture, they initially made a small series with CKD kits, but before mass production could start the plant closed down.

We will come back in depth and detail to all these great vehicles in Part 3 of this series. For now, back to the background story:

The Guangdong scheme continued in the second half of the 1990’s and the numbers kept growing. It was then that the central government got a bit nervous.

Initially, the central government applauded the innovative Guangdongnese, even sending secretary general Jiang Zemin to visit Sanxing! But when too many foreign car makers moved into Guangdong it feared that things were getting out of hand, especially since the central government’s own regulations concerning joint ventures were now completely ignored, and the government didn’t earn anything because there were no taxes levied.

Guangdong had gone too far and the central government decided that is was crack down time. The crack down began in 1998 was from the outside a general campaign against smuggling, called the “9898 Smuggling Case”. One area of particular focus was the tax-free import of car parts, which was now labeled as “smuggling”.

Containers were confiscated and people were arrested. Without parts there could be no car production and the scheme fell apart fast. Factories closed overnight and the cars simply disappeared from the market. From then on any import of any car parts into Guangdong was forbidden. When the central government hits, it hits hard.

Sanxing was hit hard as well but they held out for a while. Mass production stopped only in 2000, and even after that the factory managed to continue sporadic production, using parts that were already delivered. The third-generation Dodge Caravan for example was made until 2002. 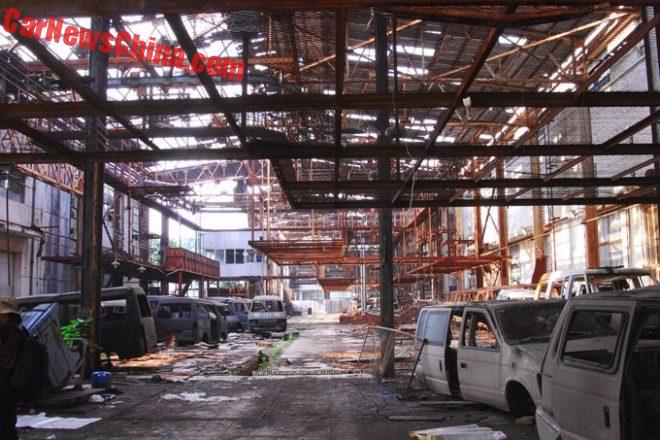 The factory in the late 2000’s. Via. Mitsubishi Delicia’s on the left, Dodge Caravans on the right.

But in 2002 is was over and the factory in Zhanjiang stood empty until 2016, with the CKD production line still filled with half and fully assembled cars. It became a popular place car freaks and souvenir hunters. The final end came in July of this year when the factory was demolished, leading to protests by local residents, questioning what will become of the premises. The local Zhanjiang government has since decided the area will be used to build high-rise apartment buildings. 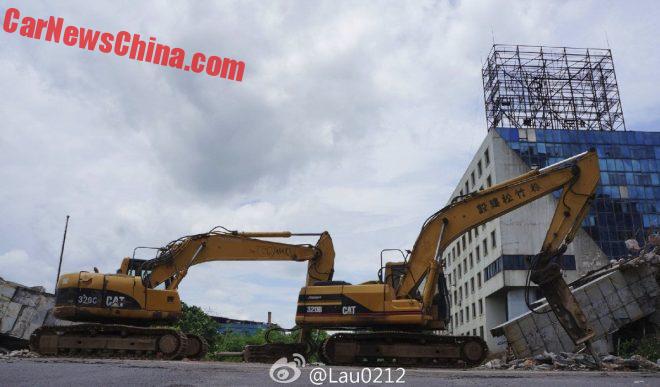 The monsters move in. Via. 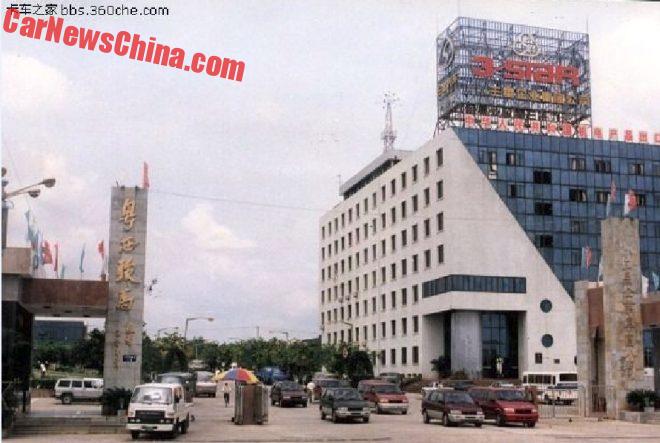 The same building in happier times.

It was all a huge waste. Sanxing was by no means a small company. Over the twelve years it existed it accumulated assets worth 5.3 billion. There was the large factory in Zhanjiang with two assembly lines, there were 8 “branch offices” around the country and at its top the company employed 8000 people. When all was well Sanxing was a success story, receiving visits from “party leaders” from local and central governments. But as we have seen, not all was well.

With many thanks to Sam, Damien and Erik for their support and tips.