Volkswagen Up! Cloned In China 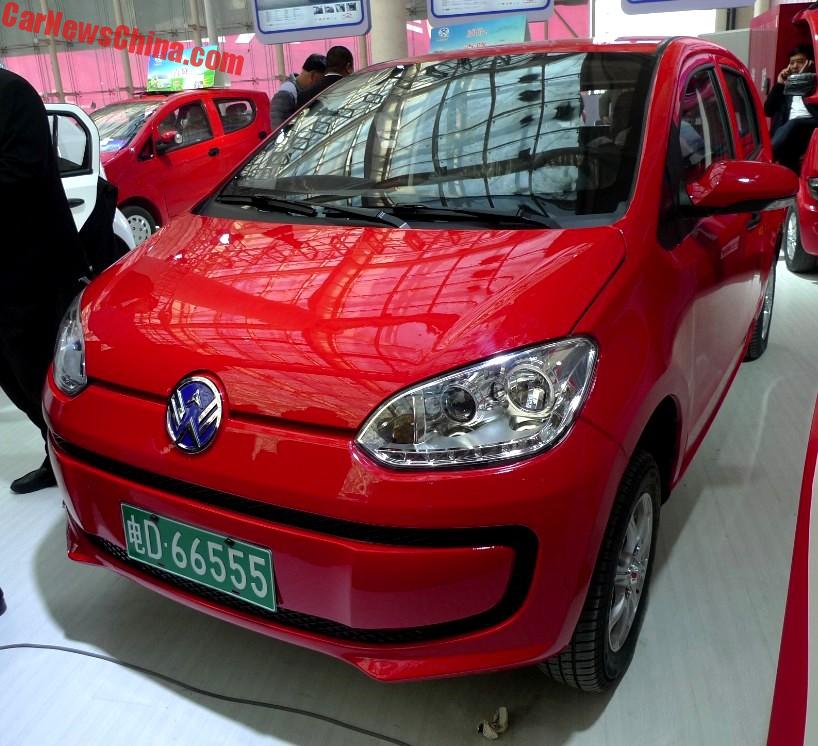 The Volkswagen Up! has been cloned in China. This is the Weikerui V7, a new LSEV seen on the 2017 Jinan EV Show. It has the same shape, the same size, the same proportions, the same lights, bumpers, and even the logo is very close. Compare to… 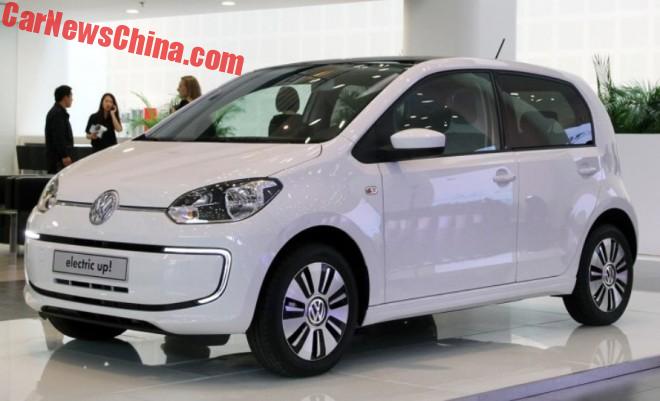 …the real thing, and see how similar the logo looks, even though it isn’t… 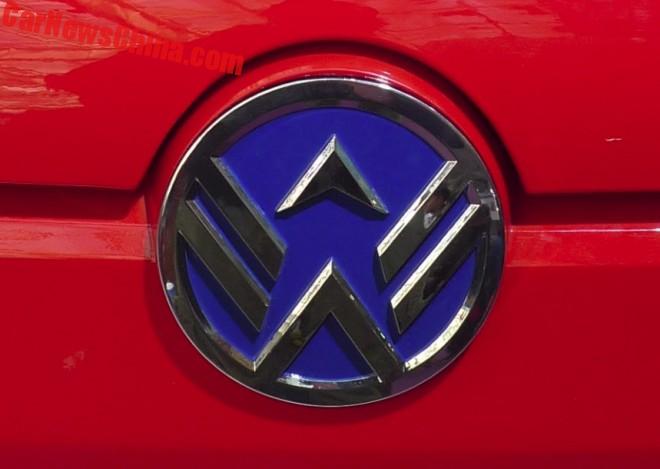 … exactly the same. Close up it is obviously not a Volkswagen logo but if you look at it from just a little bit further it seems very real.

The Weikerui V7 is made by a company called Dezhou Weikerui Electric Vehicle Industries (web), based in the great city of Dezhou in Shandong Province. The business was founded in 2011 and the factory has an annual capacity of 60.000 cars. They make five kinds of LSEV including the V7. 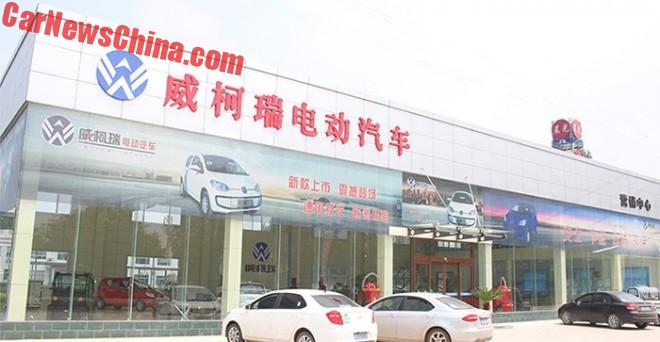 This is not a Volkswagen dealer. 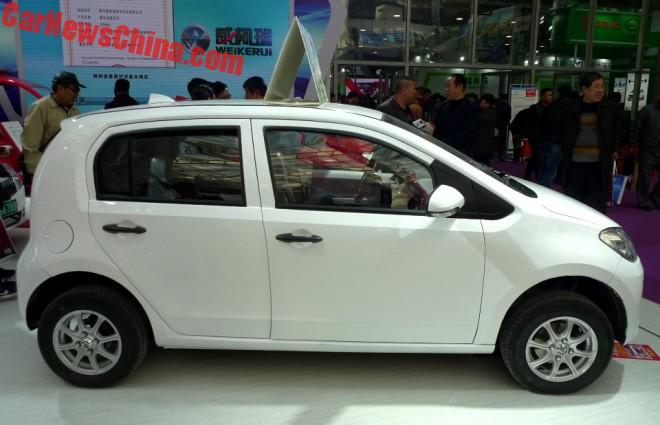 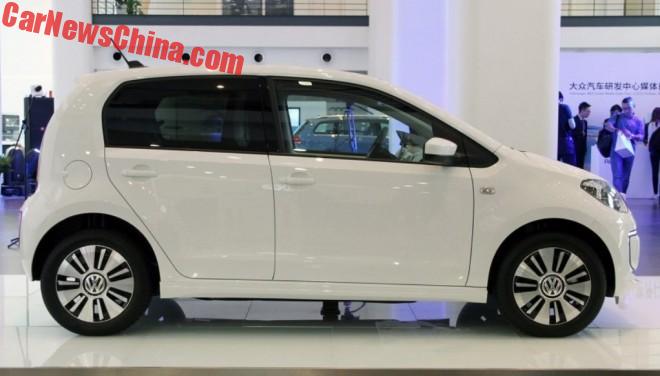 The other clones we met at the show are smaller versions of the original. The V7 however, is almost exactly the same size as the five-door Up.  The other clones, and indeed 99% of all the cars on the show, are low-speed electric vehicles (LSEV). The V7 however will be available in LSEV form and in EV form.

Buyers of the latter will be eligible for China’s green-car subsidies and all other perks like free license plates and parking lots. The EV version will be allowed on the highway and have a top speed of 120 kilometers and hour.

The two cars on the booth were LSEVs fitted with fake EV license plates. The LSEV version will be launched sometime in Q2 and the EV version later this year.

The LSEV version is available with various combinations of batteries and motors. The base model has a 12V/100Ah lead-acid battery mated to a 9.6hp motor. Top speed is 40km/h and 0-30km/h is gone in 10 seconds. Range is 100 kilometer and charging the batteries takes 10 hours on 220V.

There are no official specs available on the EV version yet except the above mentioned top speed, but staff told me it will have a range of about 200 kilometers.

The e-Up! is imported into China and buyers are therefore not eligible for any price-related subsidies. There is only one version available and it cots a hefty 268.800 yuan ($38,800). The e-Up! is powered by an 82hp electric motor and has a range of 157 kilometers. 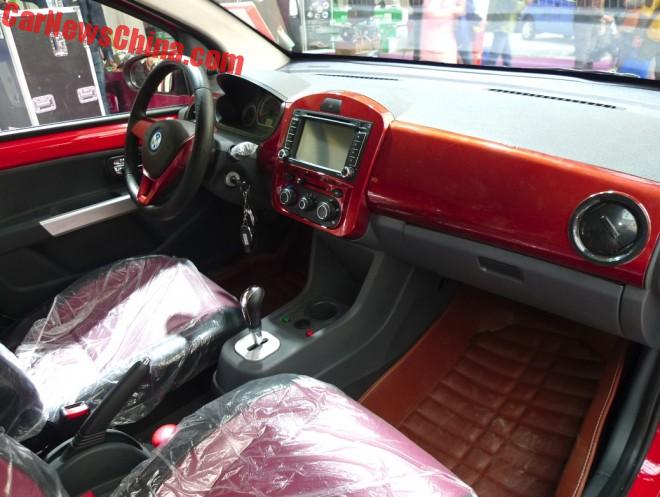 Interior-wise Weikeru got a little bit more creative. It has an 8-inch screen for the infotainment, wood-colored panels on the dashboard, red-black seats, very large air vents, and a sporty steering wheel. The drive selector is located on the center tunnel. Quality wise it was on par with other cars of its kind: acceptable for the money don’t try to push or pull anything because it will break. 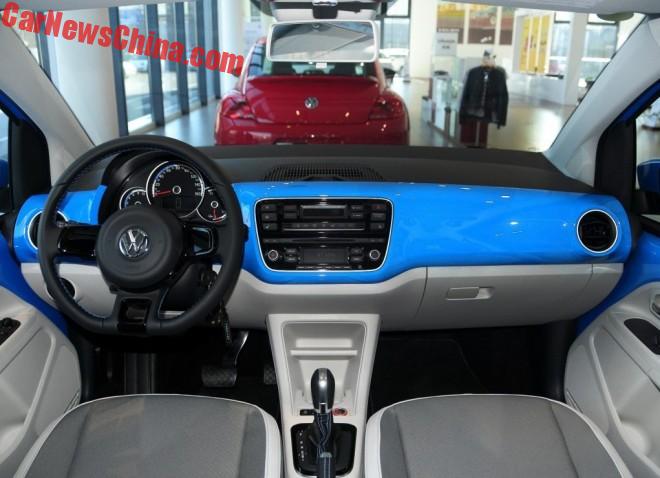 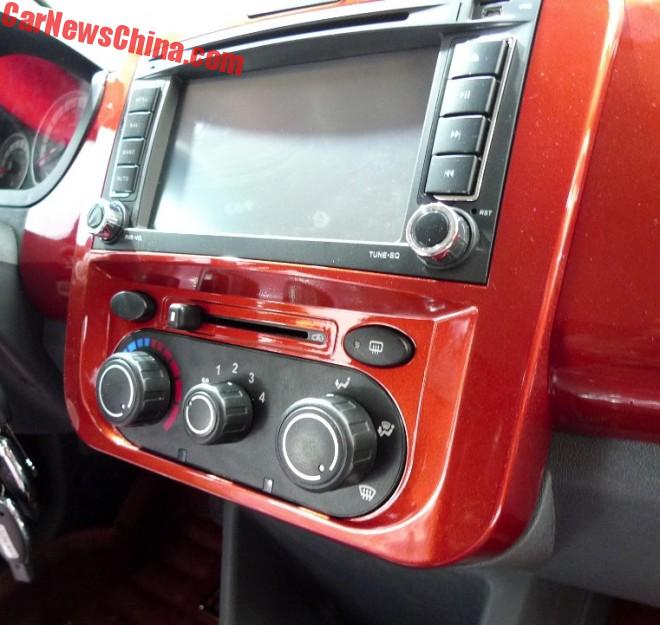 The infotainment system comes with a CD player (let’s listen to ABBA!) and a USB socket. It plays the radio, MP3, and MP4-video files. There is a beautiful slider for the vents and a rear window heater. 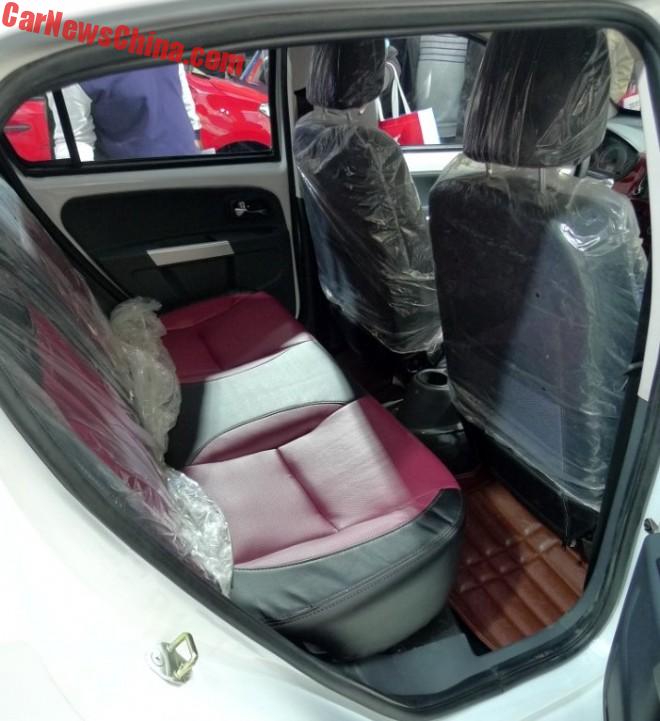 The rear seat compartment with seats that looked very worn out. 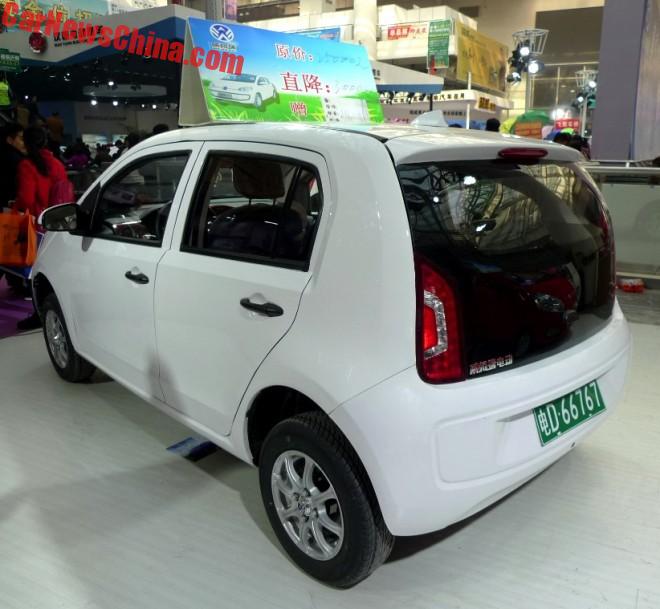 Rear lights are an exact copy of the Up!. Weikeru even copied the small spoiler above the window. But there is a difference there. The light is that spoiler is a brake light on the V7 and a reverse light on the Up!. An other difference is the antenna, the V7 has a trendy shark fin whereas the Up! has to do with an old fashioned rubbery thing. 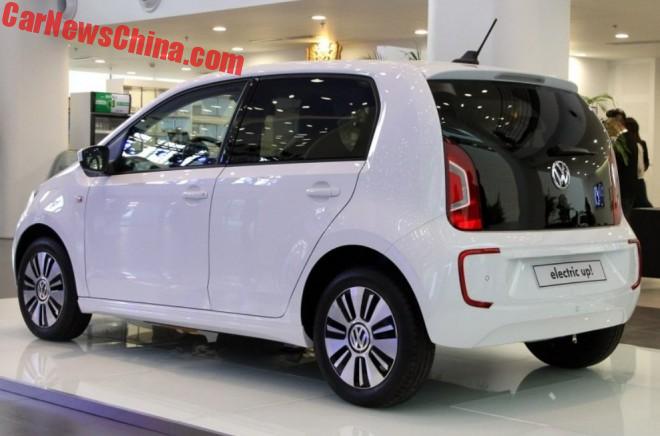 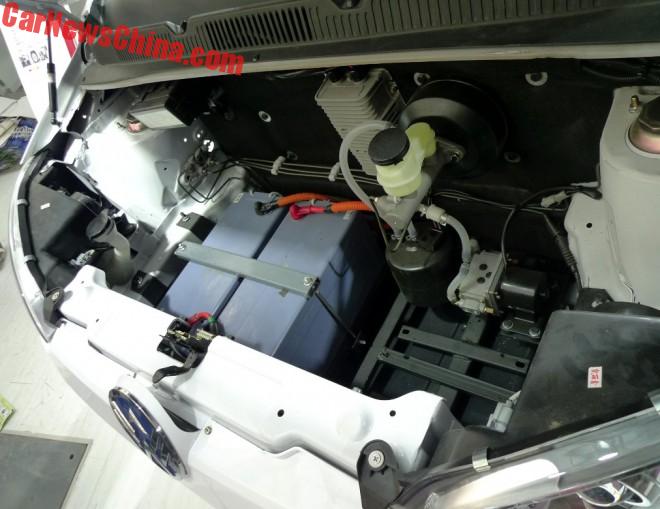 A look under the bonnet. Lead-acid yeah! 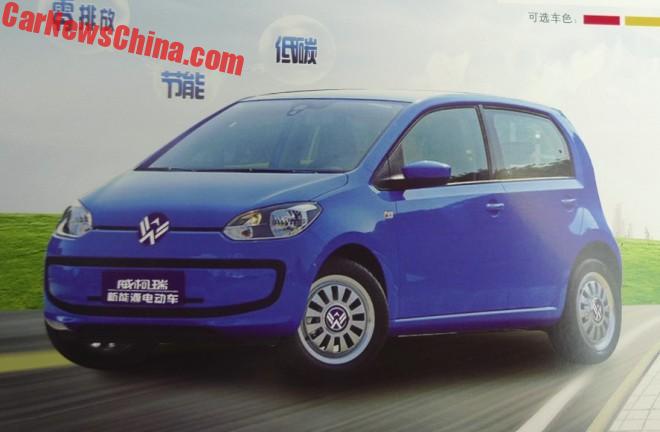 I then moved on, passed some other cars, and into the next hall, where I found… 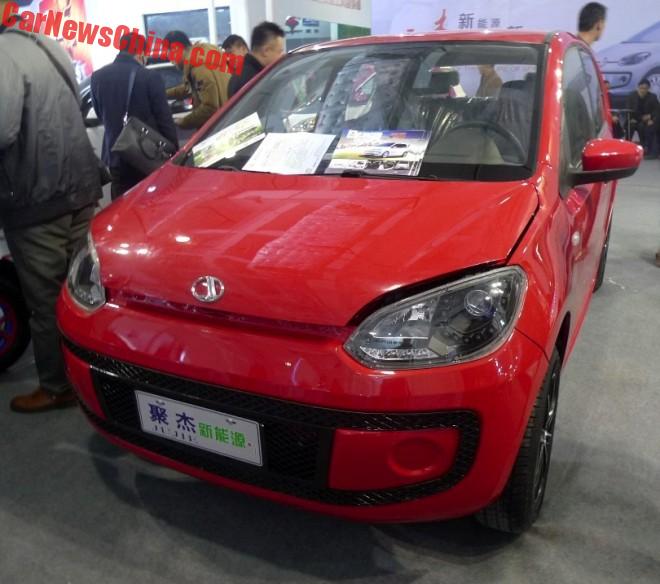 … another clone of the Volkswagen Up!. This is the Jujie Liwei. Another badge, but the same body and the same size. Only the bumpers are painted in another way. Seeing different LSEV makers offering the same body is not unusual in LSEV land. This is caused by one of peculiarities of the LSEV business. Many ‘makers’ are not really makers but actually assemblers.

They buy the bodies here, the motors there, the dashboards over there, and put it all together with their own badge on it. So far nothing too uncommon, but the unusual thing is that there are no exclusive contracts. A factory that makes a bodies can sell the same body to any buyer it wants, so many of these LSEV brands sell many very similar cars, with only the bumpers and badges a bit different. 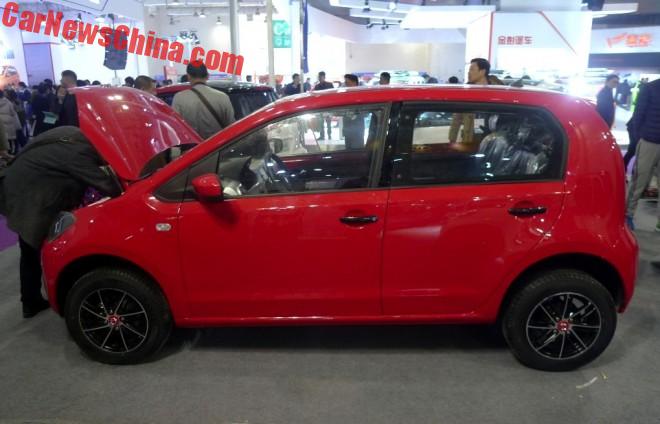 I saw only two Up! clones on the show but there will definitely be more if the model becomes a success.

The Jijie Liwei is manufactured-assembled by a company called Jujie Electric Technology (web), based in the great city of Changzhou in Jiangsu Province. They were founded only last year and make three kinds of LSEVs including the Up! clone. 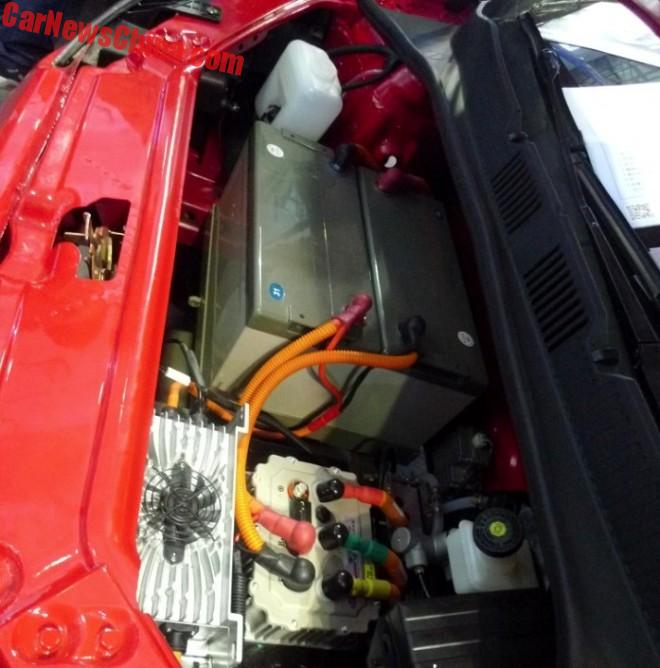 Different setup than in the V7.

The Jujie is a new product, it will be launched on the market later this year. Power comes from a 10hp electric motor mated to a 72V/150Ah lead-acid battery. Range will be 150 kilometers. The company claims a top speed of 100 km/h but that seems absolutely bogus. It will costs about 25.000 yuan. 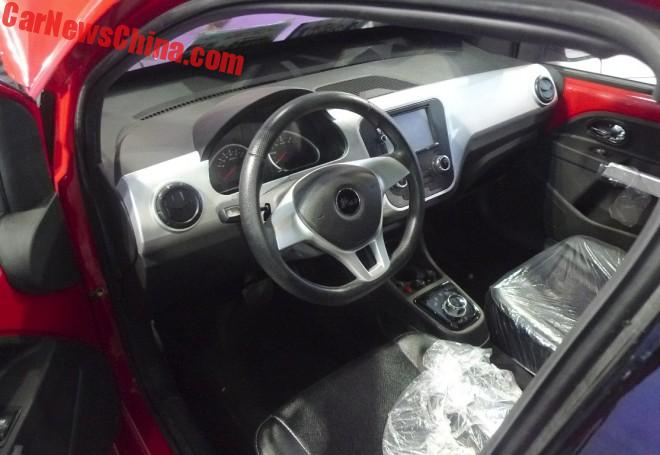 Another dash. The screen and controls are much better integrated here than in the V7, and the drive selector is a fashionable knob instead of a lever. The seats however are very boring in black. 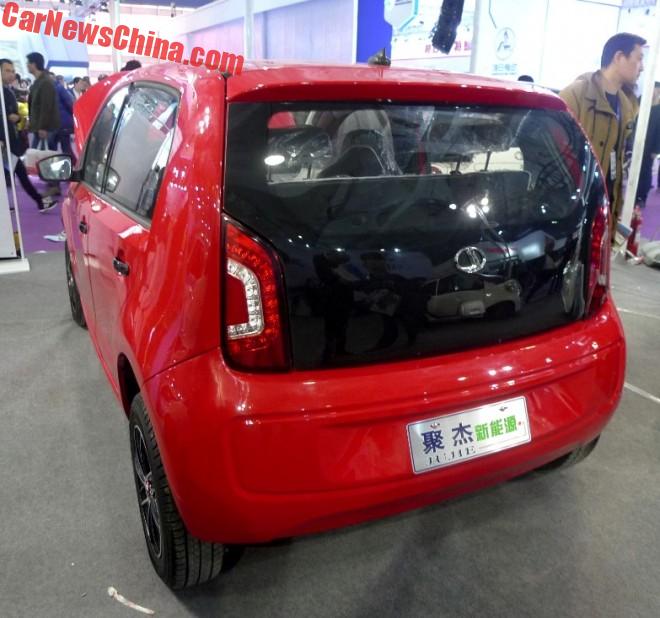 Same lights, and again a brake light in the the spoiler. 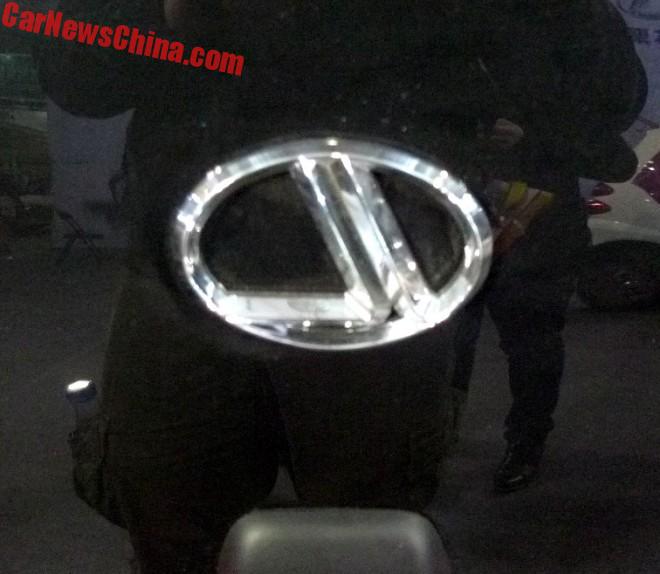 The logo is a mirrored Lexus L. 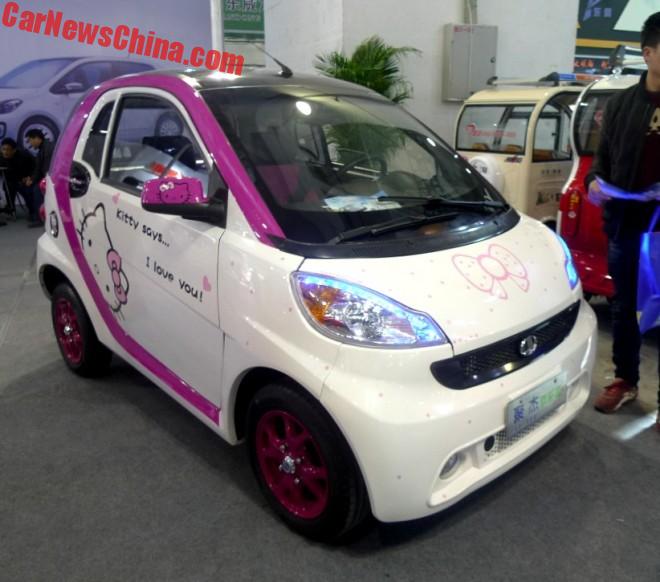 They also make a clone of the previous Smart. It is called the Tule and the Hello Kitty stickers are factory. Pink wheels! 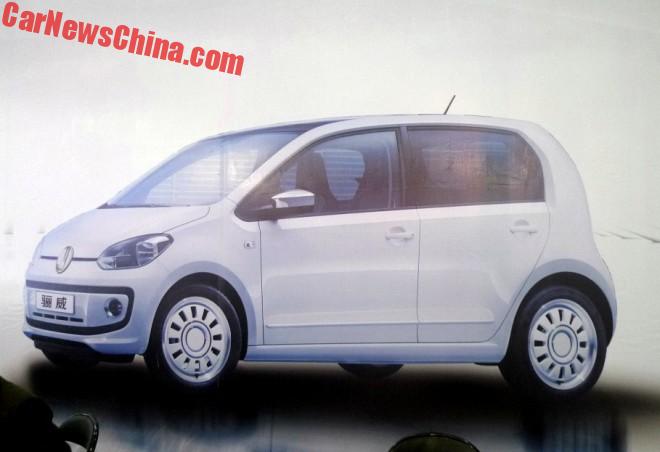 A backdrop on the booth. Note the bumper, mirrors, and wheels. They used a photo of a real Volkswagen Up! for the photo shop, the petrol version, for that matter. Can’t say they don’t dare. But will Volkswagen dare to do something about all this..? More on that as we get it. For now, goodbye with another shot of the… 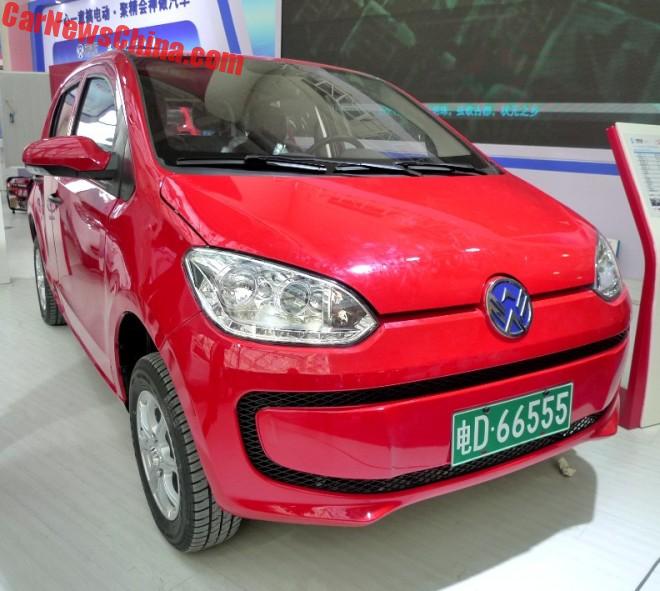