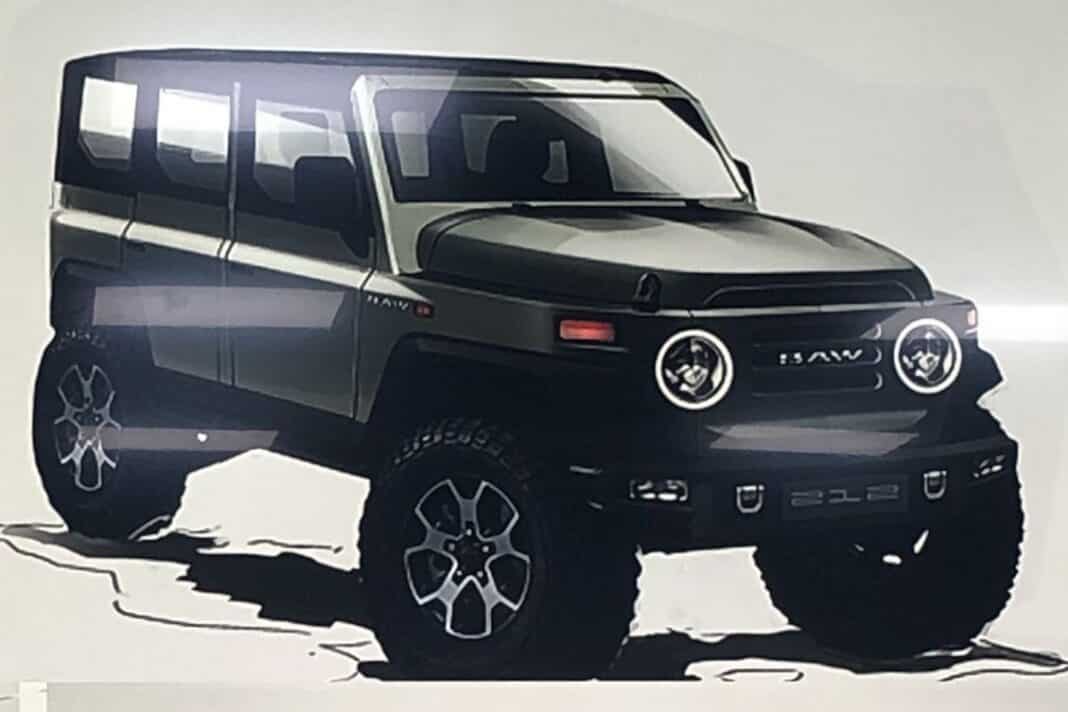 BAW, short for Beijing Auto Works, has announced an all-new BJ212, the successor to the iconic Beijing BJ212 which has been in continuous production since 1966, spawning zillions of variants and stand-alone series. BAW is now a stand-alone company and no longer part of the Beijing Auto Industry Corporation (BAIC). As a part of the separation deal, the company can no longer use the ‘Beijing’ brand name. Instead, they use the BAW name (BAW used to be the company name, with Beijing the brand name). The Chinese name for BAW is 北汽制造 (Běiqì Zhìzào). The new BJ212 will therefore be called BAW BJ212.

As we saw earlier this week, BAW is expanding into small electric vehicles and a whole lot of other cars (also see below), but one of their most important tasks is the new BJ212. during a presentation of their production plans, the company unveiled several design drawings, showing a soft-top version, a hard-top, and a two-door pickup truck. The real thing will be unveiled mid-year with deliveries set to start in late 2023.

This is the super cool hardtop version. Same engines, and price starts at 95.800 yuan ($15.000). There is no BJ212 pickup truck at the moment, but there have been many pickup variants in the past.

The pickup truck, which seems to be the coolest of the lot, will only go on sale in 2024. BAW only showed a drawing of a two-door version but there have been four-door double cab pickup trucks in the past, so perhaps BAW will make a four-door at some point in the future as well.

The presentation also included two interior images, one with a luxurious passenger car-style interior and one with a very basic interior (below). They are both the hardtop version. The basic car is likely intended for utility variants used by various government services, forestry and the like, where the BJ212 has always been a very popular car.

But that is now all. Far from it. This slide shows the rest of the future. Seven new platfoems and 18 new vehicles. The passenger cars are on the left:

On the left, top and bottom, two new electric cars. The small blue car is the BAW S3, the streamlined white car is yet unknown. The second column from the left are 4×4 cars. The top one is likely the new BJ212, the bottom one a larger car (the picture shows a Brave Warrior). Next column shows a new MPV and a van-version of it, and the final column shows two pickup trucks (lower pic shows a Brave Warrior pickup).

Happily, BAWs website has this nice image with some of the new cars. Left to right: the S3, the new pickup truck, a commercial mini pickup truck, the BJ212, and the new MPV.

It is great to see that independent BAW has so many cars under development. Hopefully they all make it to the market as planned. Especially the BAW BJ212 (: