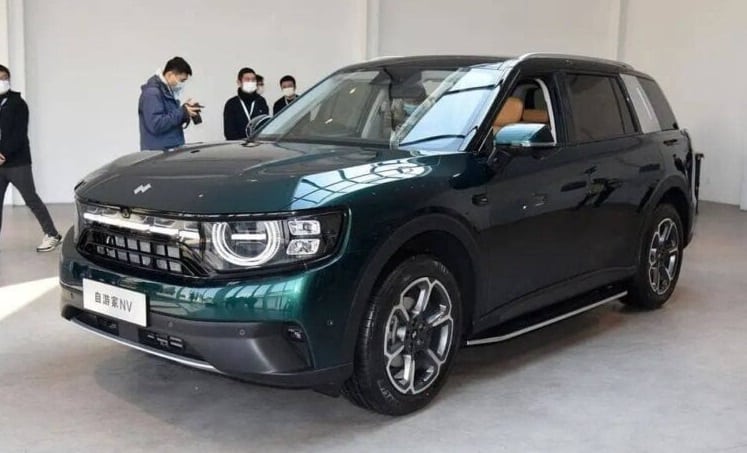 The production version of Niutron NV was exhibited at a media event. It is the first electric car from the Chinese EV maker. Do not mistake Niutron with Niu – a legendary Chinese electric scooter maker. Lots of media say that Niutron is a subsidiary of Niu, but both companies actually have no direct connection.

The thing in common for Niu and Niutron is the person of Yan Li, a controversial Chinese billionaire and former CTO of Baidu who is the founder and one of the main investors in both of them. According to Li, his goal is to make Niutron on the same level as other Chinese Ev startups Nio and Xpeng. In 2022, Niutron received 500 million USD in Series A financing. It is positioned as a premium EV brand. Its first child is the NV SUV.

Back to the NV

And now it’s time to speak Niutron NV. It will enter the Chinese market in September 2022. But the brand decided to introduce to us the production version of the new electric car. Its exterior is very specific and is distinguished by a sloping hood line and large round LED headlights.

You won’t tell at first glance, but the Niutron NV is a fairly large car. Its exact dimensions are 4915/1962/1745 mm with a wheelbase of 2910 mm. The profile of the NV looks interesting with a silver accent on the C-pillar, a floating roof, and pop-out door handles. By the way, this silver part on the C-pillar is actually the “energy stack”, showing the amount of electricity in the battery. The wheels of NV look small – the R20 size probably is not enough for this SUV. At the rear, the NV has got a single block of lights with interesting LED elements and the “Niutron” lettering. The rear wiper of the NV is hidden.

The interior of the Niutron NV has got a huge screen of the center console with a vertical orientation and 15,6-inch diameter. Other futuristic parts of its design are a D-shaped steering wheel, a digital instrument panel, and small screens at the air vents. Other interior features are 15W wireless phone charging and a possibility for front-row seats to tilt up to 130 degrees.

The second row of the Niutron EV hasn’t got anything special. We can point out fancy oval-shaped headrests and a touchscreen for climate control settings. But the cool part of the NV is its 1.7 square-meters panoramic roof. There is a lot of space in the trunk of the car (788 L), so Niutron NV can get a third row of seats in the future.

Niutron doesn’t hurry to reveal any details of the battery or electric motors of the NV. According to Niutron, NV will accelerate to 100 km/h in just 5.9 seconds. Niutron NV is also developing a range-extender hybrid with an ICE acting as a generator and powering the battery. Such NV will have a smaller accumulator.

Where will Niutron build NV?

Most Chinese startups begin with contract manufacturing and build their own factories later. But production of Niutron will start in Changzhou at the smart factory with an area of ​​770,000 square meters. Its production capacity will reach an impressive 180,000 vehicles per year.

As we have noted, Niutron NV will enter the Chinese market in September this year. Will the scooter manufacturer be able to establish itself in the field of electric cars? Only time will show.