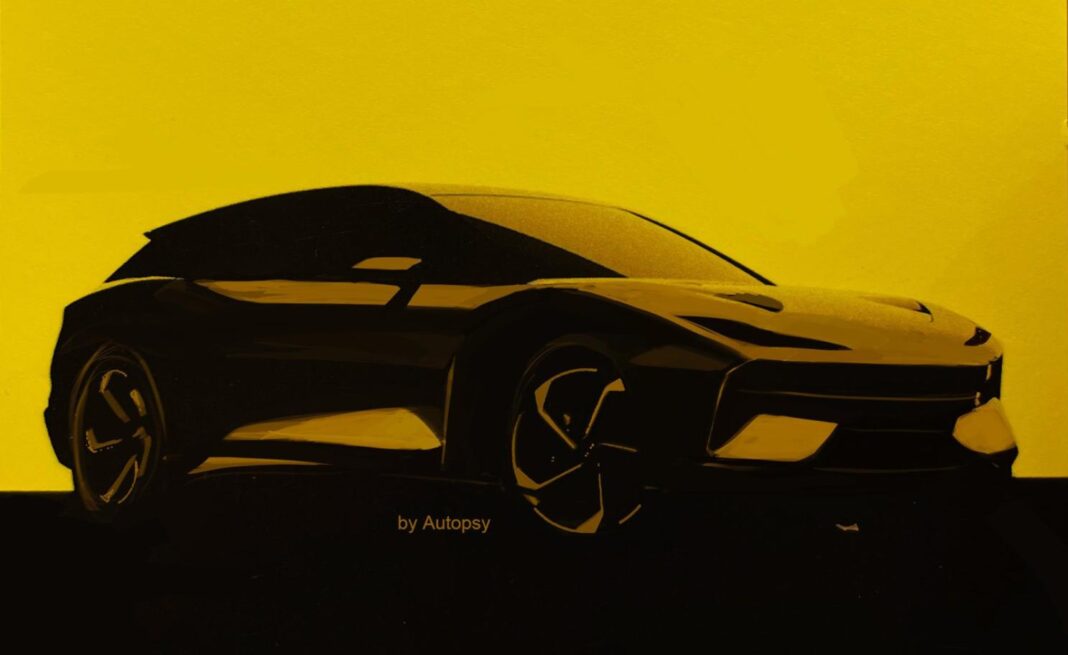 Lotus has revealed the official name of their Type 132 full-electric SUV. This vehicle’s name is Eletre. This word can refer to the Hungarian “életre”, which can be translated as “for life”. There is also a possible connection between this SUV’s name and the Portuguese word “eletro”, which means “electrical”.The Eletre debuts parallelly on March 29 in London (7:30 pm) and March 30 in Beijing (2:30 am). We can clearly tell which market is more important for Lotus based on this. Let’s see, what do we know about this beast so far?

The Eletre is the first electric SUV from the Lotus brand. Lotus calls it a “Hyper SUV”. It sounds like pure PR speech, but we can’t deny that Eletre is a highly sporty SUV with good aerodynamics and powerful electric motors. The exterior and interior design of the Lotus Eletre leaked in patent images. Let’s have a glance at them.

The Eletre’s exterior has a lot of sharp lines that create an extremely sporty look. It got L-shaped running lights and headlights integrated deep into the front bumper. Another feature of the Eletre is the active grille that provides various aerodynamic options. From the side, Lotus has a coupe SUV body shape and cameras. The rear end of the Eletre also got aerodynamic shapes with lots of sharp lines. There is an embedded taillight unit that goes all the way through the trunk. There is also a split spoiler.

The interior patent images of the Eletre show the SUV got a vast touch screen that tilts forward when the vehicle is on. The interior of the Eletre hardly got any hard buttons. This SUV got two cup holders and a wireless charging pad.

In January, spies shot the interior of the Eletre. We have seen the monostable gear selector and parking button in this image. It is funny that the steering wheel on the Lotus Eletre has a Lynk & Co badge on it. Funny but not surprising, former British brand and Lynk&Co have the same owner – Geely.

The Lotus Eletre is based on the Geely SEA platform (The Sustainable Experience Architecture platform). It is available with a wheelbase range of 2998mm to 3100mm, a capacity of the 90-120kWh battery, and it may offer a range of over 632km. The Eletre provides a peak power of 1000 hp. So it is the most powerful Lotus road car ever made. The aerodynamic design of this SUV offers a significant downforce of 110 kg on the front part and 80 kg on the rear. The Lotus Eletre could accelerate from 0 to 100 km/h in 3 seconds.

An iconic British sports car brand, Lotus, was acquired by Geely in June 2017, with a holding of 51% from Malaysia’s DRB-HICOM Group. Then, Lotus Technology was founded by Geely in Wuhan in December 2020. It got powerful backup from experienced EV startup Nio, which invested an undisclosed amount through its investment arm Nio Capital.

Lotus Tech will develop all the upcoming electric Lotus cars. The development of the last petrol-powered sports cars will remain in the UK. But after the current generation, there won’t be any new ones. So all actual development will be in China. Geely is already planning an IPO for Lotus Technology. They want the Lotus brand to compete with Porsche.

Lotus Tech Smart Factory started construction in 2020. The factory has 390 000 square meters, and Lotus completed the production line in 2020. After it is put into production, it will have an annual production capacity of 150,000 vehicles. Electric Lotus cars will be designed and manufactured in China, while ICE cars will continue R&D and manufacturing in the UK.