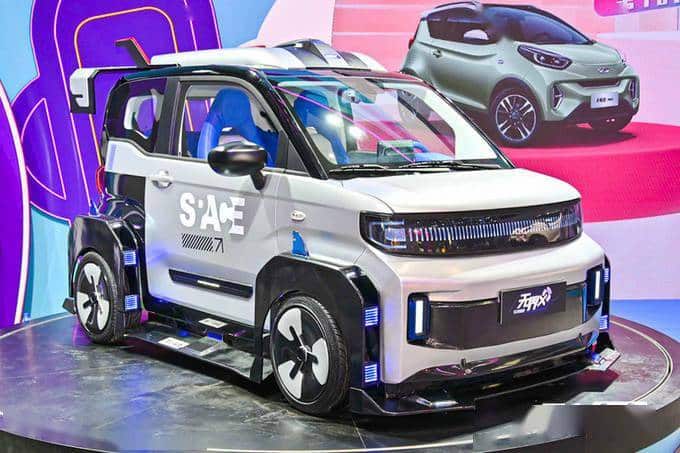 In March 2021, Chery applied for a trademark for a new brand called QQ. It is named after the Chery QQ, a clone of the Korean Daewoo Matiz back in 2003. This brand will comprise four new energy vehicles. Chery will launch it in June according to leaked documents.

QQ name references the old petrol Chery city car called QQ. It was designed in 2003 as a clone of the Daewoo Matiz. Actually, the QQ wasn’t a “clone,” it was the Matiz. But GM could never prove Chery stole the design. It is believed Chery bought the design from a Daewoo employee who wasn’t qualified to sell it. Although the QQ was a cheap car, it became the symbol of city cars on the Chinese market. In a decade, Chery managed to produce over one million of them. In the early 2000s, Chery had already turned QQ into a series. The original QQ became the QQ3, and Chery then launched the QQ6 and the crazy QQme.

Last year Chery revived the QQ name by launching a new EV called Chery QQ Ice Cream. This vehicle is aimed at the Wuling Hongguang Mini EV. And now it seems like Chery decided to create a new QQ brand without a visible connection with Chery in its name.

As we can see, the logo of the QQ brand goes with one uppercase and one lowercase letter. These characters are placed in a square with rounded angles. Anyway, the new brand’s name spells it with two capital letters everywhere else in the documentation. Also, according to the docs, QQ will make all-electric delivery cars, city cars, self-driving cars, PHEVs, EVs, batteries, etc. Chery New Energy owns the QQ brand. This is the company that makes most of Chery’s NEVs. Chinese media compare the new QQ brand with brands like Aion (GAC), ORA (GWM), and the new Lumin (Changan).

The Wujie Pro’s design is based on the Ant Z concept car, which debuted in 2021. We have managed to find spy images of this mysterious EV. It is a microcar, but many Chinese media call it a “crossover.” Recently Chery has shown teasers of the Wujie Pro. On them, it is covered with camouflage. But we can see the QQ lettering on it. Now we know that these letters meant a new brand. Chery also shared the Wujie Pro will carry four cameras on board. The Qualcomm 6155 SOC powers the Wujie Pro’s system. The new EV will get a 70 kW (95 hp) electric motor.

Worth mentioning that we have found Wujie Pro’s shots without camouflage. It has an odd boxy design with two doors. From the side, we can see it got pop-out door handles, a rear spoiler, and small wheels. It is bigger than the Chery eQ1. The front end of the Wujie Pro is somewhat controversial. It has a “sporty” front bumper. As for the running lights, they are represented by vertical elements under the headlights. The controversial thing is Chery’s lettering on this EV’s face. It seems like the Wujie Pro can be a part of the QQ series or line, but not the entire brand.

As for the interior, the Wujie Pro shows us a sufficient trunk space and four-seat layout. Interestingly, the seats have a quirky orange-black color scheme. The front seats look sporty. The center console screen looks pretty good with the iCar system on board. Under the touch screen, climate-control buttons are not only mounted. There is also a rotated gear shifter, hazard lights buttons, and START/STOP buttons.

A new brand perfectly shows how messy Chinese companies could be with all these brands. The Chery QQ Ice Cream somehow didn’t make it to the QQ brand or hasn’t made it yet. Previously, this car was known as a part of the Chery iCar sub-brand. We hope to get more information about the new Chery brand soon.