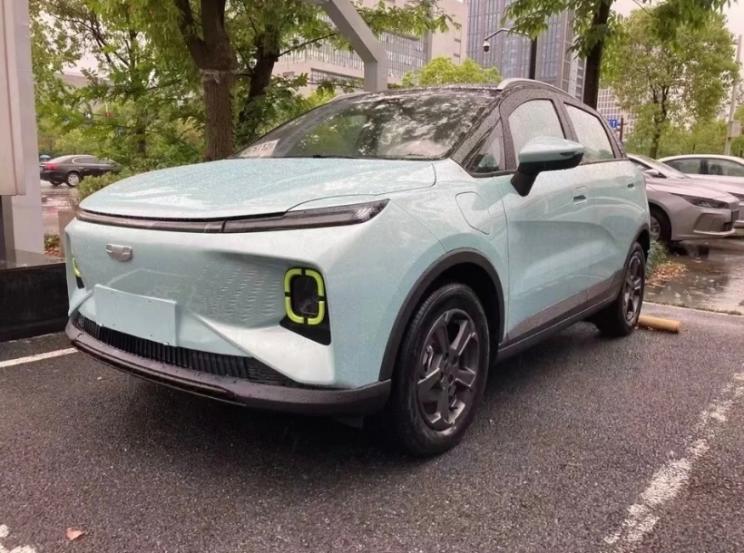 Eagle-eyed snappers have caught the new Geometry E out in the wild ahead of its expected launch later this quarter.

The new compact SUV is a significant update on the EX3 Kung Fu Bull brand and is based on the same chassis borrowed from the Geely Vision X3. Although both cars will be sold alongside each other, the expectation is that the E will sell more than its sibling.

It adopts a more futuristic and less rugged appearance which should help it win a youthful audience.

Geometry is the electric vehicle subsidiary of Geely and aims to attract a younger, mass-market audience.

Unlike the EX3, the E identifies as an electric car from the outset by adopting the ‘no-grille’ front end commonly associated with EVs. A small grille for cooling purposes sits beneath the number plate mount.

A full-width running light, similar to the ‘lightsaber’ look on an XPENG P7, features above recessed headlight units in rectangular fluorescent yellow surrounds.

Textured plastic running into the headlight recess adds some extra detail, as do angular strakes on either side of the number plate.

From the side, we see that the E is available with two-tone paintwork with a blacked-out roof and pillars that help reduce the vehicle’s visual height.

The E also has some pleasingly unfussy surface treatment with a curved indent on the doors dropping towards the rear of the car and a horizontal crease running from the rear door into the taillights.

We can also see that the E uses flush door handles and that the charging point has moved onto the passenger side front wing. Overall, it’s notably less SUV-looking than the EX3.

Five-spoke black alloys match the roof color and are not overly large or aero-focused.

Around the back, the E makes a rare departure from the lightbar trend and instead opts for two boomerang shape clusters with a deep groove running between them.

The waistline appears relatively high and leaves plenty of metal on which to spell out ‘Geometry’, while unpainted plastic is used at the bottom of the bumper.

A unique design feature is the vertical high-level brake light embedded into the spoiler around the rear window.

Four colors will be available on the E, with Green Vine, Jasmine, Mint, and Blue Lotus the options.

Unfortunately, camouflage obscures much of the dash and center console, but we can see that the E keeps things quite minimalist.

For example, simple front seats with light bolstering and an essentially flat rear bench suggest the E won’t emphasize keen driving, but a two-tone color scheme, which oddly is different in the front and the back, at least lifts a fairly spartan cabin.

Fluorescent yellow piping on the seat bolsters adds extra jazz, as does a two-tone blue steering wheel with black center boss and black and silver elements.

We can get a clearer idea of how the cockpit will look thanks to official images released by the brand.

The main feature of note is the twin-screen set-up with a pair of 10.25-inch LCDs on top of the dash. The central screen is a touchscreen and controls all major functions. Geometry has opted to remove nearly all physical switchgear, save for toggle stalks behind the steering wheel and a rotary dial to select the drive mode on the center console. Voice activation will likely be offered.

Further back on the dash, metallic speaker pods on either side are part of a ‘high-level’ stereo system. In the center, a light-up plastic fin changes color depending on different scenarios.

Power comes from a GLB Intelligence & Power motor with a maximum power of just 60 kW, slightly less than the 70 available on the EX3 but adequate for the size of the car. We don’t know how large the battery will be; however, we do know it will be of the lithium iron phosphate variety.