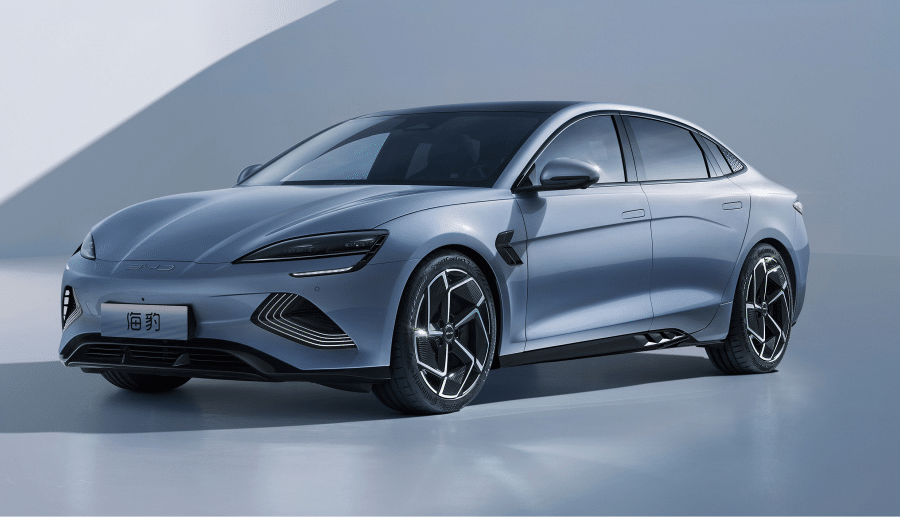 The BYD Seal is a sporty sedan with a smooth shape and a sloping roofline. Its drag coefficient is 0.219 Cd – slightly better than the Porsche Taycan with 0.22 Cd. Other fine details of the Seal’s exterior are long narrow headlights, low hood, pop-out door handles, and long taillight unit.

The Seal’s interior has a lot of ‘ocean’ styling. For example, the air vents of the Seal have a wavy pattern and are decorated with a delicate blue trim. The steering wheel of the Seal has three spokes and a flat bottom. Its shape looks like a fish’s tail. As for the main screen, it has a 15.6-inch diameter and can rotate landscape-portrait.

BYD Seal is based on a BYD e-platform 3.0. Its main benefits are safety, space, and comfort. It also has a CTB (Cell to Body) technology. It means the Seal’s battery is integrated into the frame. With CTB technology, the Seal’s floor is the top cover of the battery. But don’t worry: BYD claims the battery can handle even a 50-ton pressure. Moreover, with a CTB technology, the Seal’s torsional rigidity reaches 40,000 Nm/degree. It is slightly less than the Porsche Taycan, with 42,000 Nm/degree.

BYD is also very proud of the Seal’s iTAC (Intelligent Torque Control System). It can control each wheel’s speed by more than 50 ms in advance. BYD claims that the iTAC system allowed the Seal to pass a moose test at 83.5 km/h. It is an extremely high speed, so it needs to be proved in some independent tests.

So the BYD Seal is an inspiring car with a great range, powerful motors, reasonable price, and loads of tech on board. We will keep an eye on the Seal. So stay tuned!