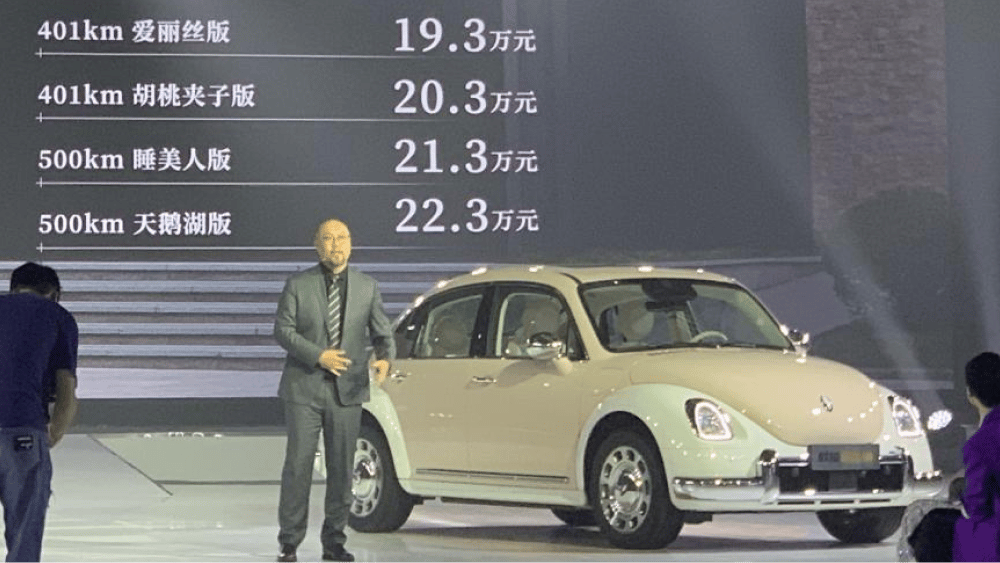 ORA is an all-electric brand under Great Wall Motors (GWM). Its model line is primarily aimed at female customers. We also know it for its performance at different Auto Shows that are still alive and strong in China. For example, they decorate their stands with soft pastel shades, invite some male celebrities, set makeup tables, etc. Honestly, it looks refreshing compared to traditional car brands with ‘car show girls’, etc.

The ORA Ballet Cat is an electric hatchback whose design is inspired by the Volkswagen Beetle. It has the same proportions with an almost flat windscreen, sloped roofline, and headlights on fenders.

Inside the Ballet Cat, there are a lot of retro features with some modern details. On the center console, we see two screens in an oval-shaped block. The infotainment screen is bigger than the instrument panel, with a diameter of 12.3 inches. Another detail is a wireless charging pod in oval-shaped ambient light. The Ballet Cat also has a makeup storage compartment in the center tunnel. Worth mentioning that the ORA Ballet Cat has ten speakers as standard.

Why The ORA Ballet Cat Is The Most Feminine Car?

ORA positions the Ballet Cat as the car exclusively made for women. It is not only because of its appearance. ORA officially called it ‘an elegant car for women’. Moreover, it filled the Ballet Cat with some quirky configurations. For example, it is equipped with ‘Lady Driving Mode’ that switches on the automatic cruise control to keep extra distance from vehicles ahead. It also has a selfie camera.

And the most controversial feature is the ‘Warm Man Mode’. It is developed to reduce discomfort when a woman is menstruating. It turns on the heating and the air conditioning with one click. According to The Healthline, the heat applied to the lower back can lessen the pain during periods, so this option can be helpful. But its name could sound offensive.

In general, the ORA Ballet Cat is filled with some controversial configuration that shows some negative stereotypes of women. For example, the ‘Lady Driving Mode’ hints at the lack of the driving skill of female drivers, and the selfie camera suggests that women always want to take pictures. But ORA clearly made a bold step to make a car for women only.

Anyway, the ORA Ballet Cat is an exciting vehicle with good tech, an attractive appearance, and a reasonable price range. We will monitor it further, so stay tuned!