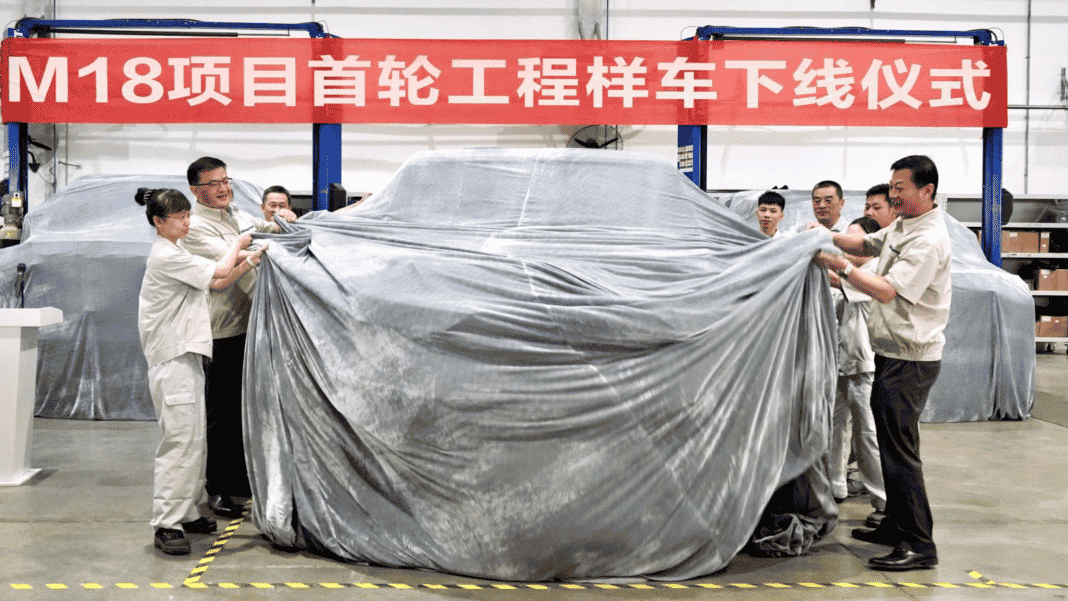 The Dongfeng Warrior M18 prototype car rolled off the production line in China. It is a full-size NEV SUV with up to 1,070 hp and 800 km of range, inspired by Dongfeng military vehicles. The M18 will hit the Chinese market in H3 2023. Let’s get acquainted with it.

It looks like the letter ‘M’ here stands for ‘Mengshi’ (猛士), that means ‘Warrior’ in English. So this long-running series will become an independent brand, probably under Dongfeng Off-road. This company launched a Weibo account “Dongfeng Warrior” in April this year. And they are clearly up to something with the “Warrior” branding.

At first, the new brand will launch the Warrior M18 vehicle. It will comprise three different versions: M18-1, M18-2, and M18-3. They stand on the Dongfeng MORV platform and will be available in EV and EREV (range-extender) versions. The M18-2 will be the brand’s bestseller. Later, information about the Dongfeng Warrior M20 emerged online. It seems to become one more vehicle in the ‘M’ brand model line. Previously, those vehicles were spied on during winter tests in China. And now, the Warrior M18 prototype officially rolled off the production line.

On July 28, the Dongfeng Warrior M18 prototype rolled off the production line. In shots from the event, we can see that Dongfeng produced several M18 prototypes. Unfortunately, all of them are covered with cloth. We can’t determine any details of the M18’s exterior. But we can highlight that it is a huge, brawny car with giant side mirrors and a high bonnet line. Moreover, the presented cars are SUVs, not pickup trucks.

Recently, patent images of the mysterious Dongfeng Warrior pickup truck appeared online. Its front-end shape looks highly similar to the M18 prototype. But the vehicle in the patent images is a pickup truck, not an SUV. It indicates that this vehicle can be the M18-1. Its appearance got plenty of sharp lines. It looks modern but still has a military spirit. It has wide wheel arches, gigantic wheels, and only two doors. Worth mentioning that its door handles are retractable.

There are some patent images of the M18-1 interior. Here we can see a round three-spoke steering wheel, a relatively big main screen, and some hard buttons under it. The center tunnel here got two strange control stick-like things. They can be used as off-road function controls. There also are a lot of straps all over the interior. We can see them on the door cards and armrest area.

So we have known a lot about the Dongfeng Warrior M18. It seems like an inspiring offroader. We will keep an eye on it, so stay tuned!