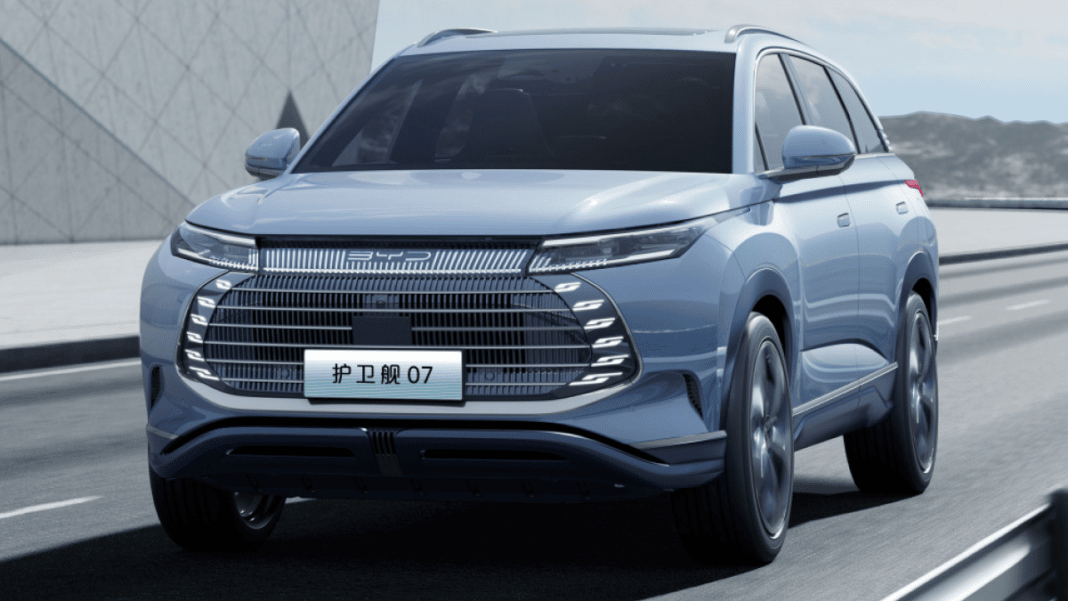 Today, BYD shared official images of the Corvette 07 (Frigate 07). It is a D-SUV that belongs to the BYD’s Warship Series. It will make its debut soon at the Chengdu Auto Show on August 26. As for the first deliveries, they will start in September. Chinese media speculate that the Corvette 07 will cost around 250,000 RMB (36,440 USD).

What Do We Know About Corvette 07?

The BYD Corvette 07 is a PHEV D-SUV with dimensions of 4820/1920/1750 mm and a wheelbase of 2820 mm. In terms of size, it is really close to the BYD Tang. These two vehicles share the same platform and have some similarities in body shape and appearance. As for the powertrain of the Corvette 07, it comprises a 1.5-liter turbocharged engine for 102 kW (139 hp). The ICE works in pair with the electric motor on a front axle for 145 kW (197 hp). Its performance version has an additional electric motor on the rear axle for 150 kW (204 hp). Its internal combustion engine is the same as the one in the Tang DM-i. But electric motors got a different power output.

We have also seen the Corvette 07’s interior. It stays in line with the BYD Destroyer 05 sedan. We can notice the same tree-spoke wheel with a flat bottom, a small instrument panel, and a giant rotatable screen with the diameter of 15.6 inches. It will be equipped with the DiLink 4.0 (5G) system.

Previously, BYD wanted to launch mass-production of the Corvette 07 in May 2022. By the end of the year, they aimed to produce 61,000 vehicles. But they have made no announcements about production starting since then.

The Corvette 07 on the official images stays in line with the car, leaked in the MIIT announcements on March 14. It has the same huge grille, sharp continuous headlights, wide wheel arches, retractable door handles, and brawny look. Headlights of the Corvette 07 are joined by an LED-element with an illuminated BYD logo in its center. Worth mentioning that its grille got elements that look like Chinese knots. It is a sign of respect for Chinese culture.

The Chinese knots theme continues at the back of the BYD Corvette 07. Its taillight unit contains them. Other details here include a sporty roof spoiler and some plastic trim. We can also underline its wheels. They look huge and have an interesting design. Their size is 245/50 R20. The Corvette 07 will be also available with 235/50 R19 and 235/55 R19 wheels.