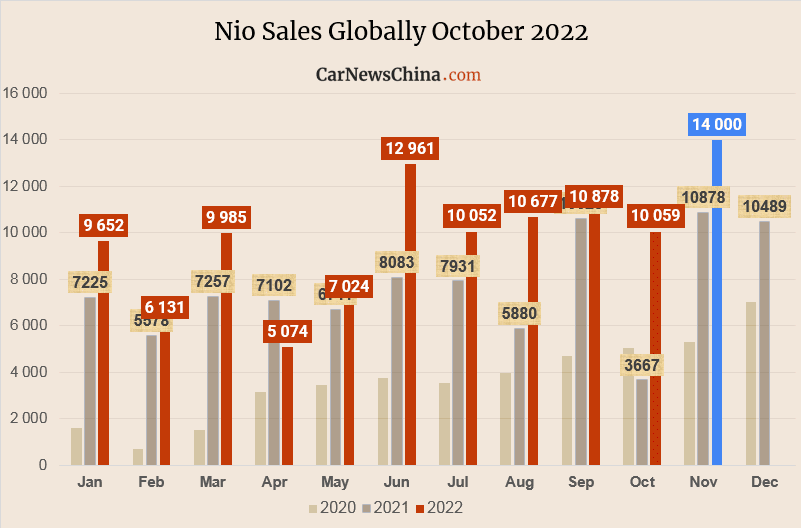 Nio will reveal its delivery numbers on December 1, and Chinese media already speculate that deliveries will hit the 14,000 cars threshold, beating the previous 13,500 expectations. 13,060 Nio cars were insured in the four weeks of November in China, according to CAAM numbers. But these numbers are recorded weekly, which means they also include the last day of October (Oct 31) and miss three final days of November (Nov 28, 29, 30).

Special attention is paid to Nio ET5 mid-size sedan sales numbers as the car is perceived as Tesla Model 3 competitor.

China’s EV subsidies are set to be significantly lower at year-end, which could pull forward demand. Also, historically last two months of a year had robust EV sales in China. In October, Nio was still struggling with supply chain and operational issues, which should be finally over, according to Deutsche bank. And most importantly, the strict zero-covid restrictions are rumored to be lifted soon in big cities.

Nio recently pushed hard for overseas expansion, entering four EU markets at once and hitting US entry in 2025. The company also announced that in H1 2023 would launch five new models, and one of them could be the EU-destined ET5 station wagon, which was recently caught in the wild in China.

Until 2025, Nio plans to expand its business to other sectors. As reported earlier, four main directions will be codenamed NB (New Business) 1-4.

Finally, on November 21, Nio announced ET7, ET5, and EL7 (ES7) prices for Germany, Netherlands, Sweden, and Denmark. It was also a direct entrance to the home market of Nio’s main competitors – BBA (Benz, BMW, Audi). Nio aims for the premium segment, so the final EU prices were highly anticipated. The first deliveries of ET7 have already started in Europe.

Soon we will see how Nio solved its operational issues – we will closely watch the November deliveries announcement.