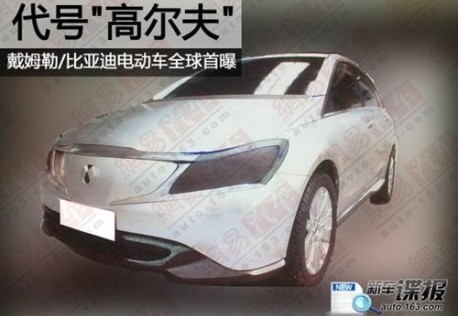 The contract for the 50-50 partnership was signed in May to create an R&D operation with registered capital of 600 million yuan.

“We’ve now had the green light to move ahead – and are especially pleased to receive the business license just a few months after signing the contract,” said Dieter Zetsche, chairman of the Board of Management of Daimler AG and head of Mercedes-Benz Cars.

“It will accelerate our joint efforts to create an all-new electric vehicle for the Chinese market,” he said.

According to the China Association for Automobile Manufacturers, the nation has set a sales goal of 1 million new-energy automobiles a year by 2015, a target that needs support from development of electric vehicles and the necessary infrastructure.

“At the research and technology center in Shenzhen, German and Chinese engineers, designers and other experts are very well aligned and will soon be joined by more colleagues from both partners. We all are eager to utilize the strengths of our two companies to create a new brand of electric car in China,” he said.

Daimler and BYD aim to make the car available in China some time in 2013 and will market it under a new brand jointly created and owned by both.

This year, Stuttgart-based Daimler AG is commemorating 125 years of the automobile. The pioneering spirit of its founders set the world in motion by creating the world’s first automobile.

Continuing to spearhead that tradition of innovation, Daimler is now leading the industry on “The Road to Emission-free Mobility” after many years of research on new energy vehicles.

As part of the 125-year celebrations, the Mercedes-Benz B-Class fuel-cell World Tour began in January this year to highlight the latest generation technology.

Its fuel cell vehicle, the first of its kind put into mass production, will reach the Shanghai leg of the tour in April to coincide with the upcoming Auto China 2011.

In the course of the last 30 years, Daimler has filed more than 600 patents relating to battery-powered vehicles, 230 of them for lithium-ion technology.

Its new exclusive partnership with BYD is now set to be another great achievement in Daimler’s quest for excellence as the company continues to reinvent the car to meet market trends and needs.

The initiative between the two companies has already been recognized with the recent “Golden Award for Technical Cooperation” bestowed by the Economic Information Daily published by Xinhua News Agency.

“This award is undoubtedly a fantastic signal for our R&D cooperation with BYD,” said Ulrich Walker, chairman and CEO of Daimler Northeast Asia Ltd.

“Daimler and BYD will take full advantage of each other’s specialized expertise to develop a brand-new electric vehicle in line with the government’s policies to build a greener future.”