China to invest 15 billion US Dollar in new energy cars 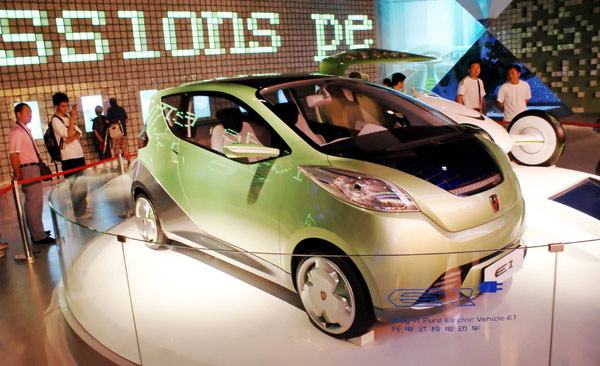 China will launch a development plan in energy-saving and the new-energy vehicle industry to make the country a leader in the sector over the next 10 years, with government funding of 100 billion yuan ($15.28 billion).

The long-expected plan, jointly drafted by the Ministry of Industry and Information Technology (MIIT), the Ministry of Science and Technology, the Ministry of Finance, and the National Development and Reform Commission, has been submitted to the State Council for final approval, said Su Bo, vice-minister of the MIIT.

According to the draft plan, which has a specific focus on hybrid and pure-electric vehicles, China is aiming for the top position in the global new-energy vehicle sector with sales volumes of 5 million units by 2020, as the government plans to invest in core technologies to build a strong and competitive new-energy vehicle industry chain.

The draft plan also said that during the country’s 12th Five-Year Plan (2011-2015), China aims to have a production capability of 1 million new-energy vehicles, with pure-electric and plug-in hybrid vehicles accounting for 50 percent.

Moreover, to promote the development of core technologies to ensure a sustainable future for the sector, the central government will establish as many as five businesses to produce batteries and electric motors by 2015.

A Bloomberg report, citing Wang Xiaoming, a research fellow at the Industrial Economics Research Department of the Development Research Center of the State Council, said the nation aims to lower the price of batteries used for electric vehicles to 2 yuan for each watt-hour by 2015 and 1.5 yuan a watt-hour by 2020 as part of a stimulus plan for the new-energy vehicle industry.

With the government’s heavy investment plans, Chen Qingquan, chairman of the World Electric Vehicle Association, said he expects China will lead the electric-vehicle sector with an estimated 15 percent market share for hybrid and pure-electric vehicle sales in the world’s biggest automobile market by 2020.

That compares with JPMorgan Chase & Co’s estimate that electric vehicles will only account for 1 or 2 percent of global vehicle sales by then.

“The Chinese government’s focus on pure-electric and plug-in hybrid vehicles is strategic and quite reasonable to make the nation’s auto industry competitive in the global market, as Western countries have dominated the traditional auto technologies,” said Gao Li, an auto analyst with Huachuang Securities.

“Moreover, China’s competitive edge in batteries, electric motors, lithium and rare-earth resources can help the nation to become a leader in the electric-vehicle industry,” Gao added.

As the production costs of electric vehicles largely depend on the battery, Gao said he believes that by 2012, China will have 100,000 new-energy vehicles, which will drive a battery industry worth 6 billion yuan.