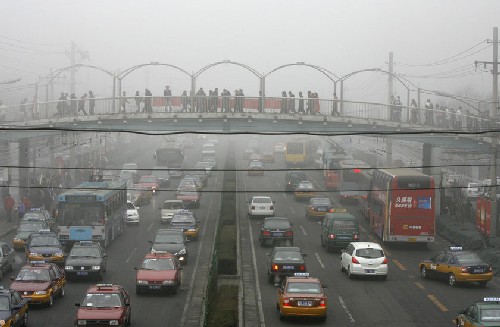 As part of a campaign to improve the capital’s air quality, drivers who scrap old cars or sell them to buyers outside Beijing can receive subsidies and cash to put toward a new vehicle.The campaign, which started on Monday [080811] and will last until Dec 31, is also aimed at boosting the local car market, which has been stagnant in recent times.

After going online to verify that their cars meet the requirements, owners will receive government coupons that can be exchanged for discounts on new cars. The government subsidies given in return for scrapped cars will be transferred to bank accounts 15 days after an owner gets a new vehicle.

Officials are especially encouraging the owners of cars that do not meet one of China’s most recently adopted national emission standards – roughly 40 percent of all vehicles on Beijing roads – to have those vehicles scrapped or sold outside the capital, according to the Beijing Environmental Protection Bureau.

Li Kunsheng, director of the bureau’s department of motor vehicles, said at a news conference at the start of the campaign that old cars, especially those that have been on the road for more than six years, pollute far more than those that are new.

“(Of the motor vehicles in Beijing) 26.6 percent are more than eight years old, yet they produce more than 60 percent of the pollution,” Li said. “This campaign will improve air quality by eliminating 400,000 old used cars and by cutting emission of nitrogen oxide by more than 10,000 tons by 2015.”

The policy is meanwhile meant to stoke the market for automobiles. That has been dampened by the capital’s license-plate lottery, which places a limit on the number of vehicles that can be registered with the government every month.

According to statistics from the Yashi Automobile Market, a car dealer in Changping district, dealers sold 154,200 automobiles in Beijing in the first half of 2011 – 59.2 percent fewer than in the same period this past year.

“We adopted the policy mainly to weed out vehicles that pollute a lot,” Feng Huisheng, deputy director of the environmental protection bureau, said on Friday. “The policy can help encourage more people to buy new cars at the same time.”

“The price provided by the subsidy policy is pretty much an attraction,” said Li Yunwei, chairman of the Beijing Car Owners’ Society.

Some car owners have adopted a wait-and-see attitude.

“My car is seven years old and is still going well,” said Kong Luyu, a Beijing commuter. “Despite the subsidies from the government and auto companies, the individuals still need to invest a great amount of money. The policy might only work for the moment for those who are considering getting a new car.”

“The policy means well itself,” said Liu Jinliang, head of sales and vice-president of Geely, one of the 16 car dealers taking part in the campaign. “But since it’s voluntary, it remains unknown how many drivers will be willing to hand over their cars.”

A third party, the China Beijing Environment Exchange, will verify the ages of old cars and will be involved in granting the subsidies. That will prevent the government from having to perform those tasks and make the campaign more efficient.