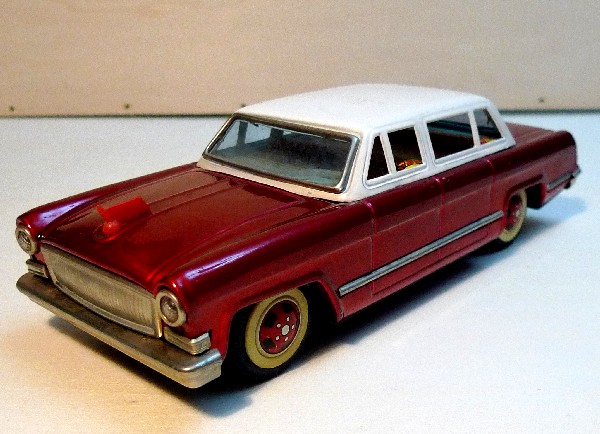 The Chinese tin toy industry started in the early 1970’s and continued until the early 1990’s. I am a fanatic collector and will show some of my treasures on this website. Today Part 1. 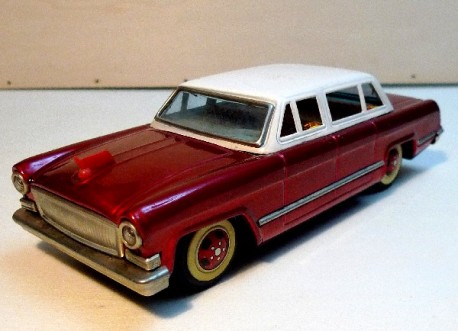 This beauty is based on the Hongqi CA770. I have a couple of these sedans, you can see another one in the header above. They seem the same at first sight but the wheels are very different. The version on pic was a few yuan cheaper to make. Chinese factories made many variations on one model, with different wheels, different colors, different interiors and even different drive-trains! Sure the collector wants ‘m all and won’t rest before he has ‘m all. 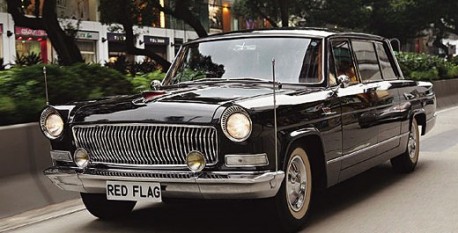 The real Hongqi CA770. The tin toy manufacturing was concentrated in two cities: Shanghai and Beijing. Shanghai had at least five factories, Beijing only one. The factories didn’t have names but numbers. This is typical for the communist era when names all but disappeared, Mao even had a plan to replace people’s names with numbers. That fortunately never happened but otherwise the rest of society got ‘numbered’.

It is almost impossible to know in which factory a certain tin toy was made. There are no markings, no logo’s, no years and no brand-names. The only thing that helps is again a number. All China-made tin toys were numbered with combinations like: MF-777, ME-666, MS-555 and some more. Unfortunately these numbers are not exactly connected to factories but to the sort of toy. MF are mostly cars and trucks, ME military vehicles and MS all kind of figures and dolls. 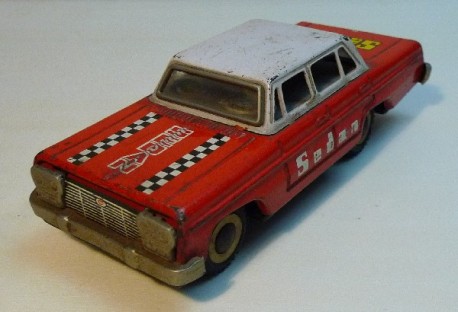 Based on the Shanghai SH760A. This is an extremely rare toy, highly valued by Chinese collectors, much more rare than the Hongqi on the first pic, mostly because much less were made. How many were made exactly nobody knows for sure, this is the same for any of the China-made tin toys. Unlike the Hongqi-toy the Shanghai-toy was never exported abroad. The Hongqi appears on eBay now and then but the Shanghai never does. The only country in the world where you can find it is China. In seven years I managed to find five, mostly on local second-hand markets. The car on pic is the best I have…

The perfectly restored SH760A from the Shanghai Auto Museum. The toys were painted in dual-tone while the real cars were not. I guess this was an idea from the toy factories to make the cars more attractive for young buyers. 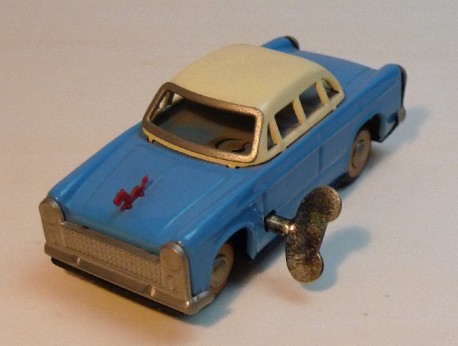 An extremely rare tin toy this is. It is based on the Dongfeng Golden Dragon CA71 sedan. It is rare because this variant has a wind-up motor. There was also a ‘standard’ variant which looked exactly the same but came without the wind-up system. The standard variant was powered by a friction-system instead. The standard toy is very common and easy to get, it was exported as well and can relatively easy be found on eBay. This wind-up variant cannot and even in China it is very hard to get. I just have this lonely blue one, it was also available in green, I am still looking for that one… 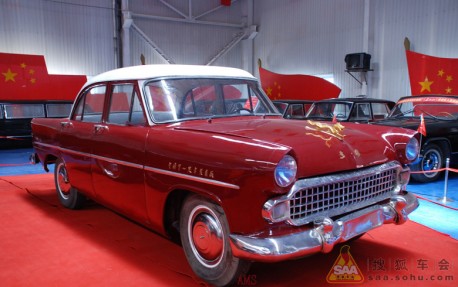 The real Dongfeng Golden Dragon CA71 sedan, known as China’s very first passenger car, based on the French Simca Vedette. Not many were made and as far as we know there is only one in existence today. Anyway and how, that is something for another story. 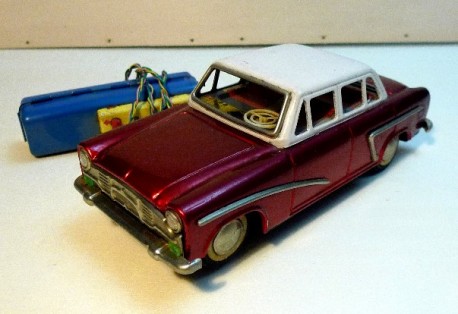 Another Shanghai, this one based on the Shanghai SH760 ‘Phoenix’. It has wired remote control. It can go forward, backward and make corners to the front-right and front-left, it cannot make corners to the back. Remote controlled Chinese tin toys are rare but not extremely so, in the late ’70’s and early ’80’s many were made. This toy itself is very rare, in all these years collecting I’ve only found this one example, it had somehow ended up in Russia where someone listed it on eBay. The same car was also available in grey. 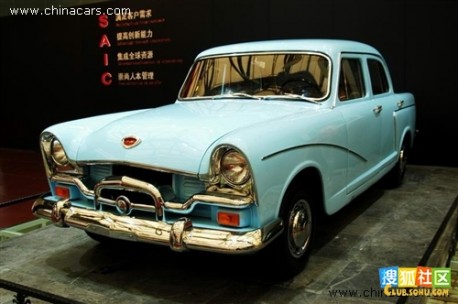 The real SH760. Whenever I tell people about my collection their first question is: “How many you have?” About 400. Second question is: “What are they worth?” In general Chinese tin toys are still worth less than Japanese but more than South-Korean, Hongkongnese and Taiwanese.

Prices go up because more and more Chinese people start collecting tin toys, prices will likely continue to rice by some 10% a year. How much a toy is worth exactly depends as usually on condition, rarity and whether the box is available. Box makes a huge difference, tin toys with box are worth some 50% more. 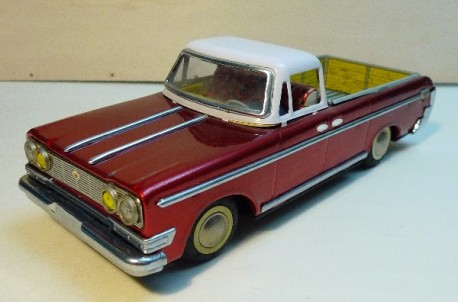 This is one of the biggest Chinese tin toys ever made. It is some 35 centimeters long and is based on the pick-up truck based on the Shanghai SH760A. ‘Based’ here with a very big B because the toymaker took some liberties. It has round head-lights while the SH760A did have square lights. It has suicide doors which the SH760A didn’t have. Even worse, no pick-up truck will ever have suicide doors. The doors are there because this pick-up tin toy is based on a sedan-tin toy which I also have in my collection. The toy factory didn’t bother to remove the rear doors when they made the pick-up truck. 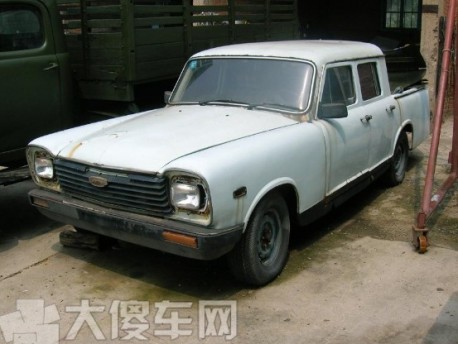 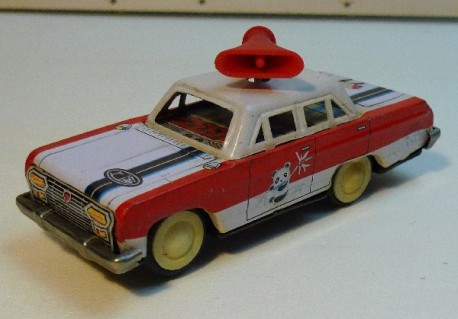 This is a very funny one and with only 15 centimeters one of the smallest Chinese tin toys I have. It is based again on the Shanghai SH760A and it is, according to the text on the box, a ‘propaganda car’. See the speaker on the roof, when you push the car the speaker will turn around in a circle. On both sides are beautiful drawings of panda’s eating bamboo. The roof-part is made of very hard plastic, this was common by smaller tin toy cars. 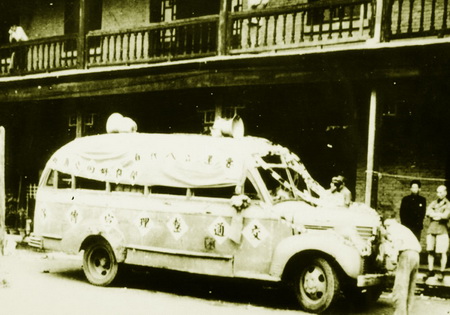 Propaganda cars did indeed exist, mostly in the ’60’s and ’70’s and mostly in the countryside. They drove from village blaring ‘Mao Thought‘ out of the speakers. They were mostly based on trucks and buses though, not on Shanghai sedans. On pic a propaganda-bus, see speakers on the roof, in the early 1960’s. 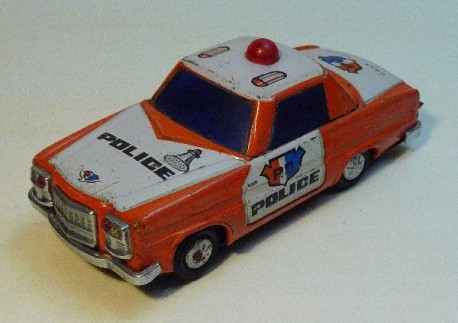 This last car in today’s story isn’t based on any real vehicle, as far as I know. It is a brilliantly designed Benz-like police car with an imposing grille, bumper and headlights. It is one of my personal favorites and it is a very rare tin toy again. This is the only one I ever saw, I bought it at a small crap-market somewhere in Beijing. The Chinese tin toy industry made many more fantasy-based cars and other vehicles, I will show more in a later story.

Well, that’s it for today. Thank you for reading.