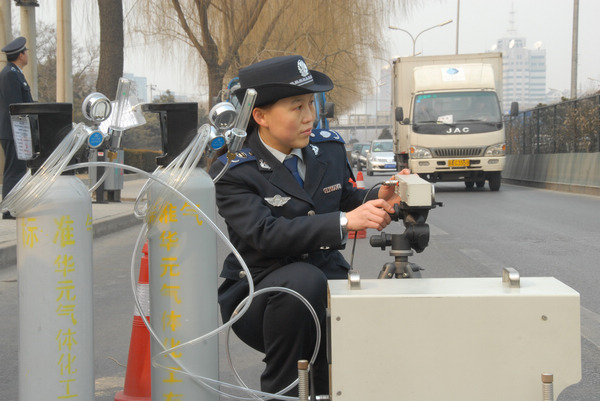 Beijing has banished about 12,500 vehicles from other provinces from entering the city because they were deemed to have excessive emissions. About 1,000 drivers were also fined since the city launched a 24-hour inspection on exhaust emission earlier this month, says the city’s environment watchdog.

The inspection was part of the city’s measures to cut down the concentration of PM2.5 (particulate matter smaller than 2.5 micrometers in diameter), which is a pollutant and major cause of haze that can be harmful to health.

“Automobile exhaust emission contributes about one-fifth to the city’s total PM2.5 pollution, as the number of the city’s automobiles has soared to 5 million,” said Yao Hui, an official with the Beijing Municipal Environmental Protection Bureau.

“It’s urgent that we curb the surge of PM2.5 intensity immediately,” he added.

The concentration of all pollutants detected in the city’s air this February has witnessed a year-to-year decline, says the bureau.

Some 360,000 automobiles entering the capital have gone through the exhaust inspection conducted by the environmental protection bureau and the Beijing Traffic Management Bureau.

“We will carry out further inspections in the future since the city’s pollutant intensity has been effectively reduced so far,” said Feng Yuqiao, chief of the automobile emission control division under the city’s environmental protection bureau.

Feng said the bureau would expand the inspection from vehicles entering the city to other polluting vehicles, including trucks at construction sites and agricultural vehicles.

Most trucks banished from the city are powered by diesel, which discharge extensive nitric oxide and fine particle pollutions, a principal contributor to the concentration of PM2.5 readings in urban areas, according to Feng.

“The diesel trucks contribute 33 percent of nitrogen oxide pollution to the city,” he said

“The capital has introduced a series of comprehensive measures recently in fighting against PM2.5 and shows a resolute determination,” said Ma Jun, director of the Institute of Public and Environmental Affairs, a non-governmental environmental protection organization.

“However, implementation is the key,” he added.

During a conference on Tuesday, Minister of Environmental Protection Zhou Shengxian also said improving the air quality and reducing the intensity of PM2.5 is a task of primary importance.

“Issues affecting the public’s daily life should be treated as a top priority,” Zhou said.