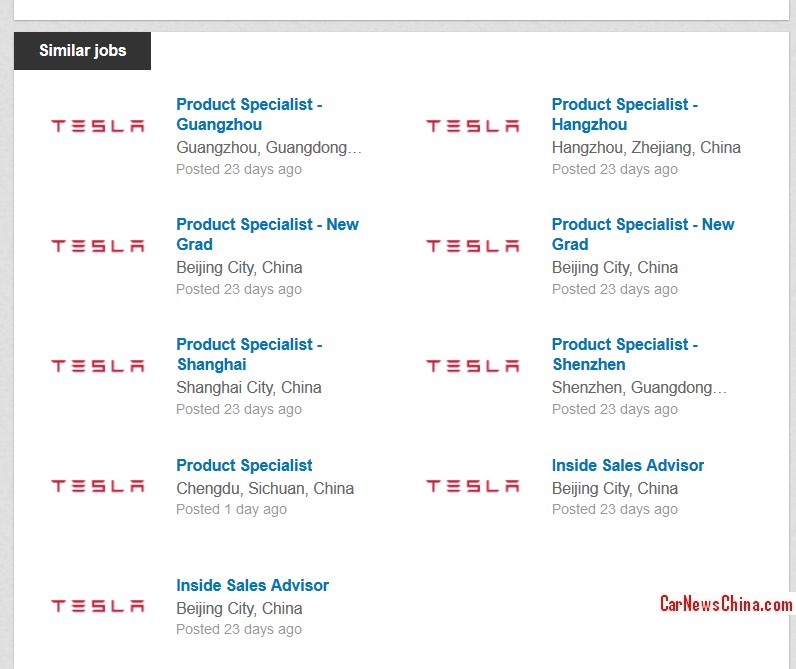 Tesla has only one store in China, in the capital Beijing. The company is very secretive about its expansion plans. Until now we only knew Tesla was planning new stores in Shanghai and in Hangzhou.

The choice of cities makes a lot of sense. All are very rich with large highly educated populations. Missing however is the entire north and north east with wealthy coal and trade cities, such as Xi’an or Dalian. Tesla buyers there will have to travel to Beijing.

At this moment Tesla has a store and a service center in Beijing, and almost-a-store and a service center in Shanghai. As for charging stations the picture is slightly confusing with one large station in Beijing and two large stations in Shanghai. Next to those the company is operating fifteen smaller stations in cooperation with shopping malls or restaurants. The stations have only one or two super chargers and are located in: Beijing, Shanghai, Tianjin, Jinan, Hangzhou, Ningbo, Qingdao, Xuzhou, Wuhan, and Shangrao.

Tesla is also looking for a legal counsel and a legal assistant for their Beijing headquarters, staff they need with China’s famously angry customers.