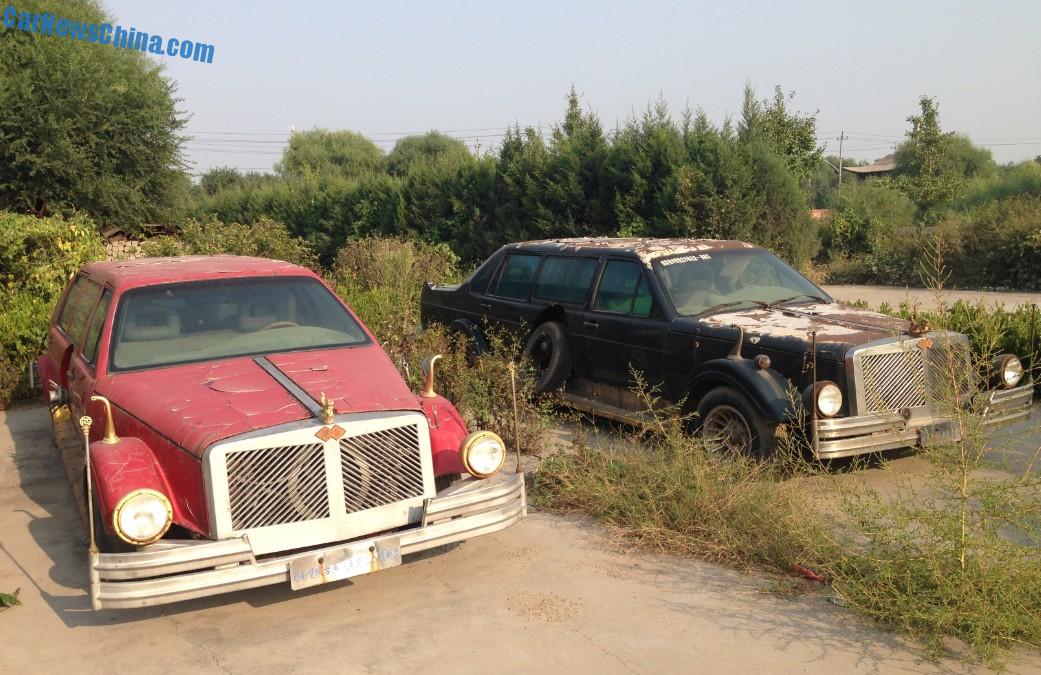 This is the completely mad Jianhua JH6620 24V3000 Wedding Car, times two, Spotted in China in the faraway Dongba area in far east Beijing. The two giant limousines stood abandoned on a lonely lot inside the premises of an abandoned real-estate project. There was nobody around so I had the time of my life with these two beautiful cars. 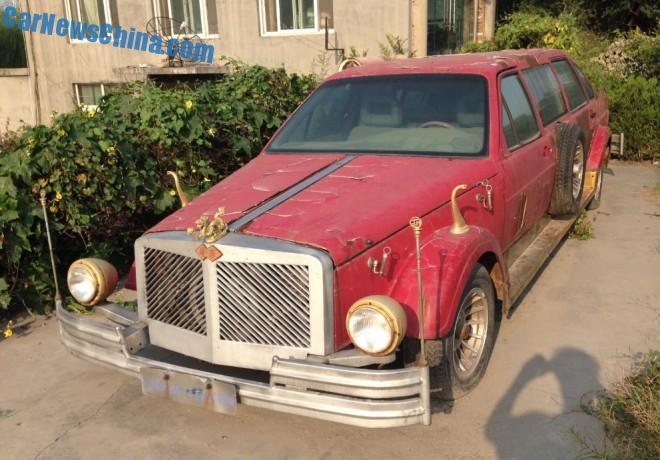 The Jianhua (建华) JH6620 24V3000 was manufactured by a company called Hunan Wangcheng Gudian Qiche (湖南望城古典汽车). The company was based in the Wangcheng District (wiki) of the great city of Changsha in Hunan Province. Gudian Qiche means ‘classic car’. Production started in the late 1995 and ended officially in 2008, but by that time production was basically nil.

Back in the 1990’s there weren’t many fancy cars in China but there was, as always, a great need to impress the guests and family on wedding parties. The happy couple could then hire a so called ‘classic wedding car’, a China-made automobile that was supposed to look like a vintage Western limousine.  Some 20 small Chinese companies manufactured these classic wedding cars, with Jinma from Shandong Province being the most famous of its kind. Hunan Wangcheng is sadly rather unknown. 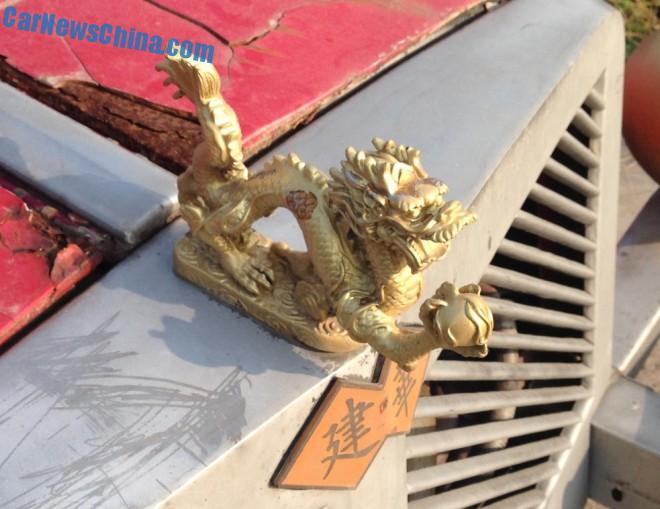 Golden dragon a work of art, holding a globe = Power. The Jianhua name, written here in classical characters, can best be translated as ‘Building China’, a typical nationalistic-bombastic name for this kind of vehicle. 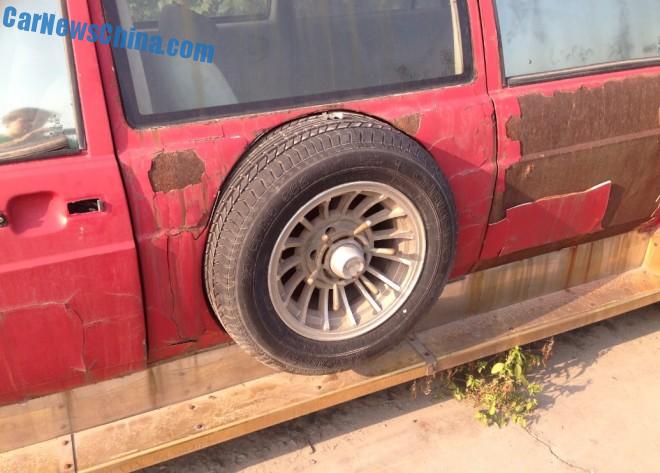 The Santana was cut in two and stretched in the middle by a full 800 millimeter. The spare wheel, one on each side, is located directly in center of the extension, an original and novel idea.

The side steps are decorated with well crafted imagery showing a horse cart pulled by six giant horses. 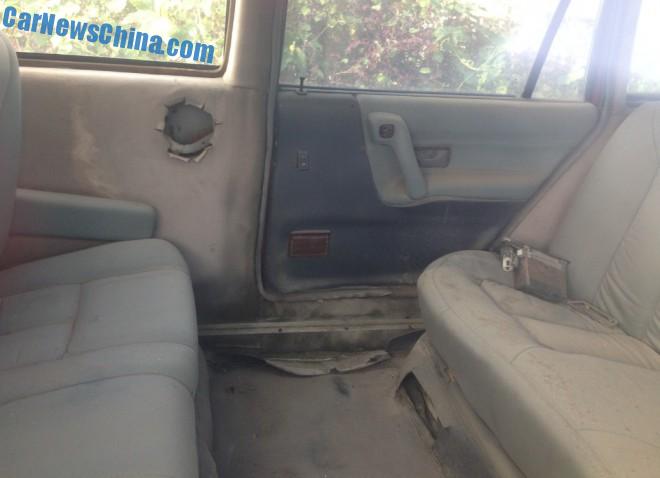 The passenger compartment. Benches are original-period Volkswagen. I guess Hunan Wangcheng had a connection in the factory so they could get an extra bench for each car. 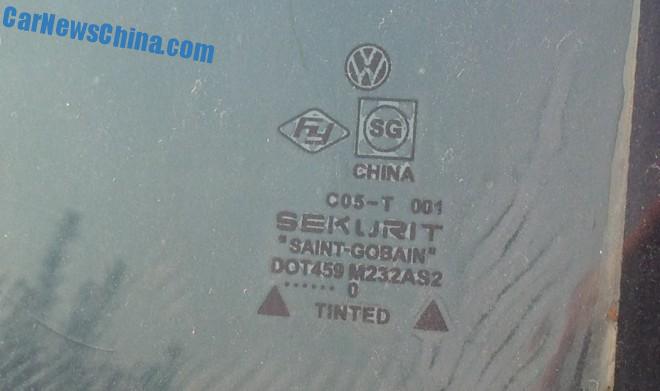 Volkswagen logo on the window glass. 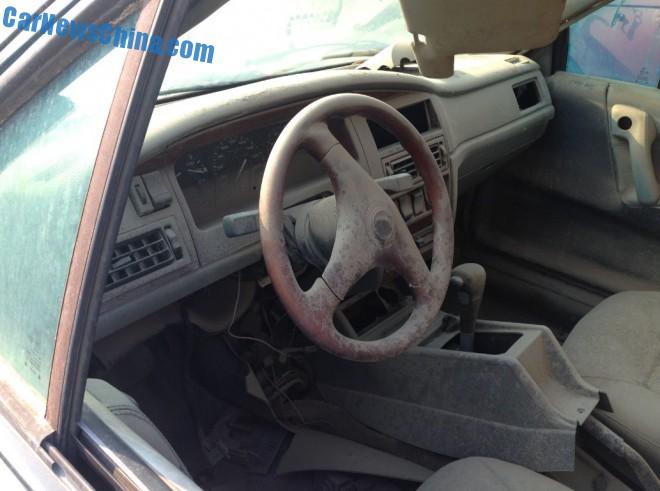 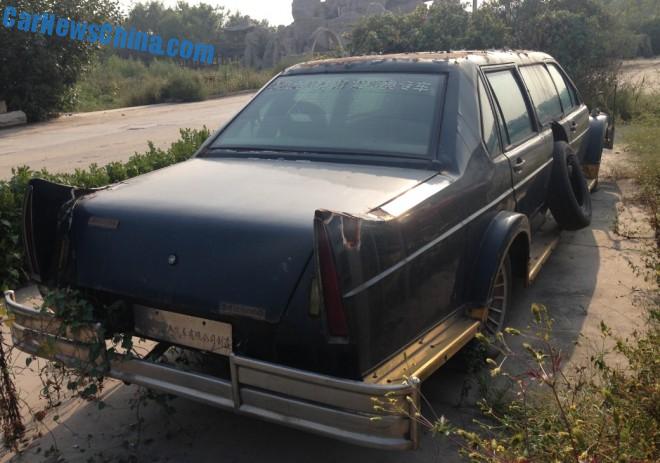 Santana 2000 clearly visible here at the C-pillar. Otherwise quite a lot of changes. The rear overhang is stretched to the max and fitted with two large tail fins with integrated light ornaments. The side step continues to the back of the vehicle, ending up in a huge heavily chromed bumper. 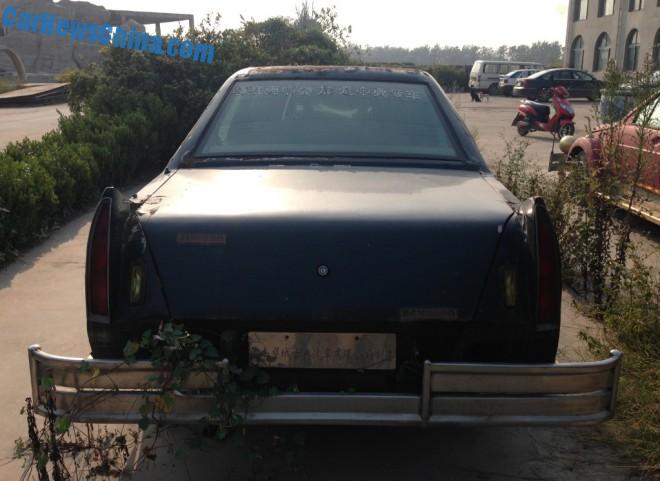 The abandoned real estate project was spa-hotel kinda combination, with some ten buildings in green surroundings with an artificial lake in the middle. The building on the right was supposed to be the main reception area  and restaurant. The building appeared to be partly inhabited, likely illegal. I didn’t see a soul bar for one girl carrying a large bucket and one woman who waved angrily. When I approached the building I was stopped by a band of seven barking dogs, big and small.

The two limousines were likely used to show the area to potential customers, travel agencies and such, in a time when all looked bright. Sure the customers must have been impressed by the giant Jianhua, but I hope they didn’t put up any money… 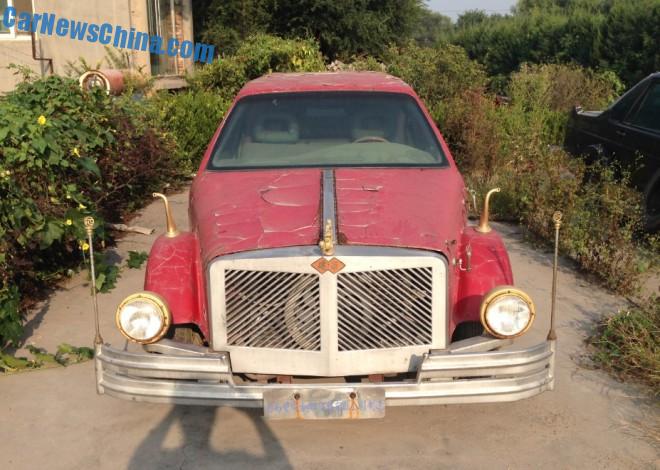 Poles on each side of the bumper for flags or other decorations. Large round headlights in gold. Behind the headlights are two golden stalks, they originally held the mirrors but these are missing here. 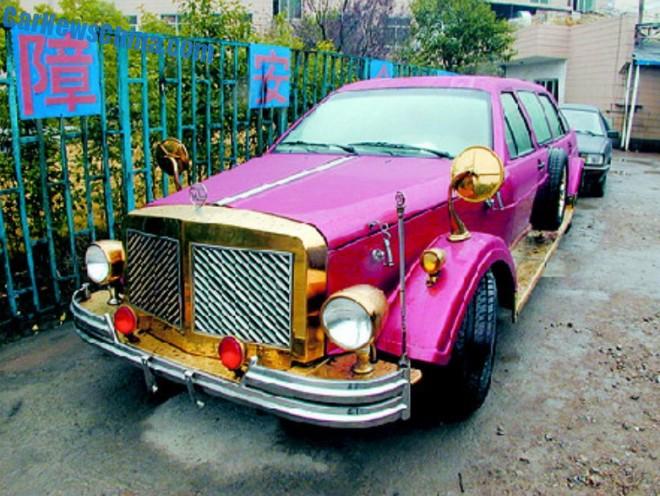 A period photo of a new Jianhua JH6620 24V3000, with a different hood ornament and the giant mirrors intact, they are bigger than the headlights! 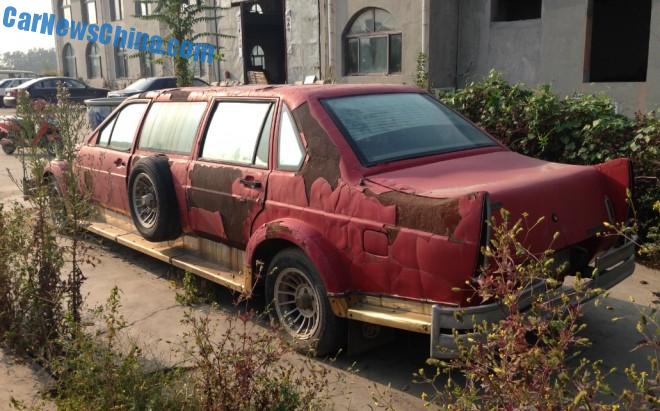 Tail fins give the Jianhua a distinctive look most modern cars can only dream about.  There were a few other vehicles parked in front of the building. Most were long abandoned except for one very new Volkswagen Passat. 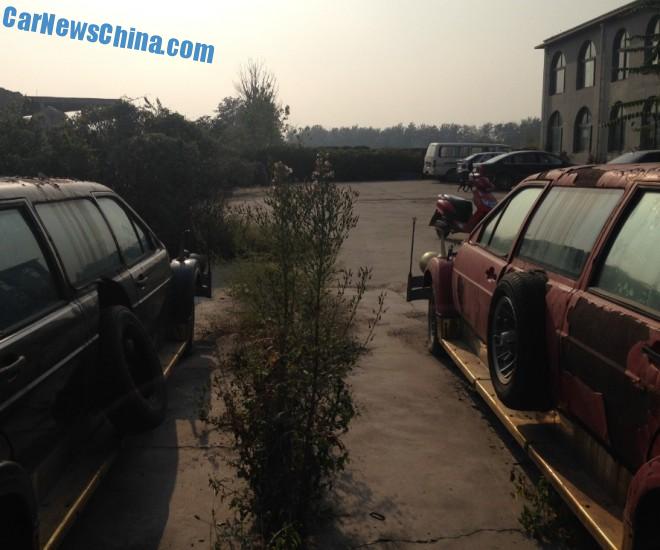 By this time I had stayed there for almost an hour and the sun was going down. My scooter on the right in front of red Jianhua. Sadly and badly, both cars seemed beyond salvation. It might be possible to get one running, using parts of the other, and repaint it all over, in Pink for example. The engine will probably work after some work, and if it doesn’t a new-old Volkswagen 1.8 isn’t hard to find in China. Or what about a 180 hp 1.8 turbo..? 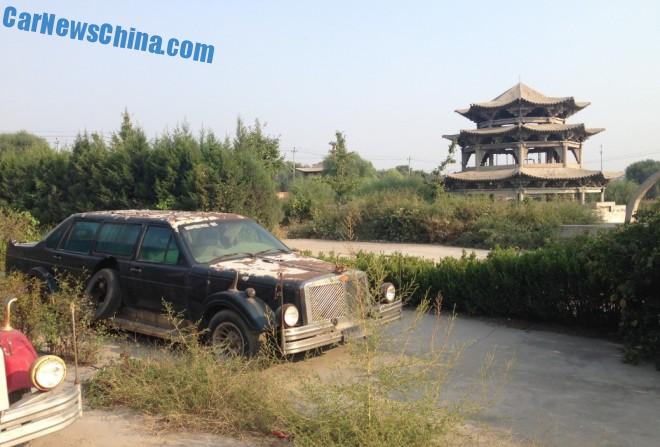 The building in the background stands next to the artificial lake. I guess it was supposed to be a romantic restaurant. 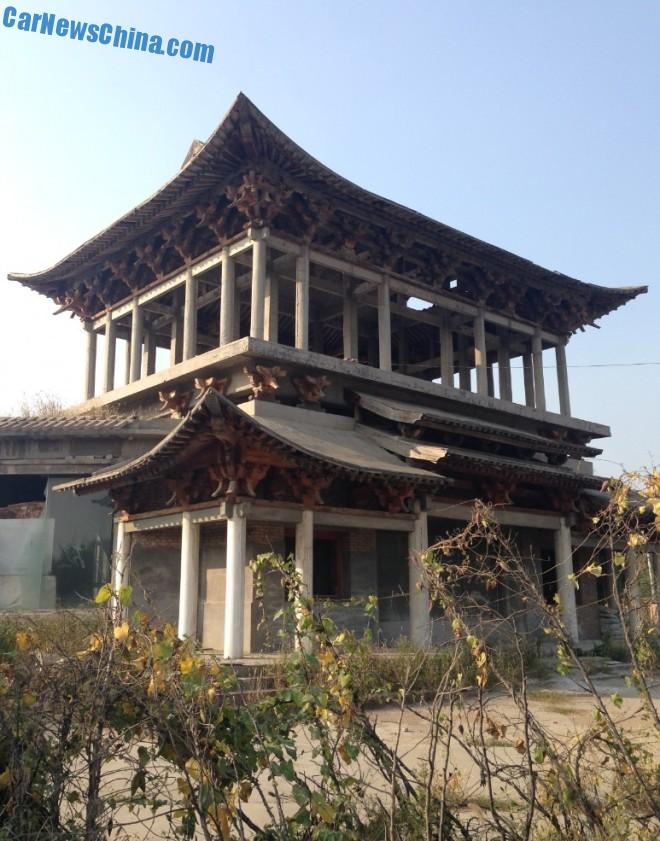 One of the other buildings. Styled like an ancient Chinese temple. Probably the spa. 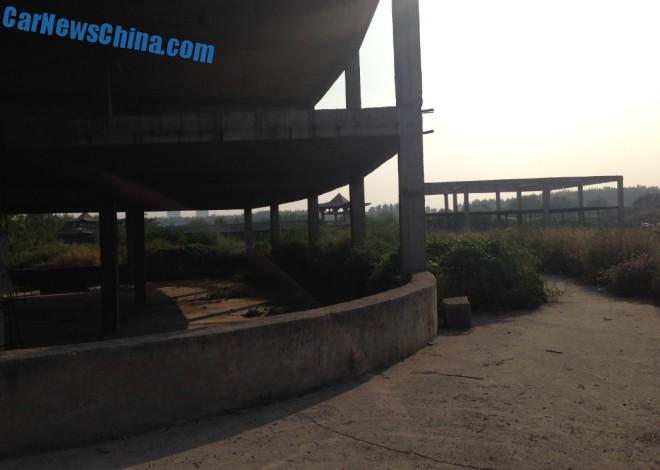 For the guest rooms. Not even close to completion. And the guests, didn’t come. 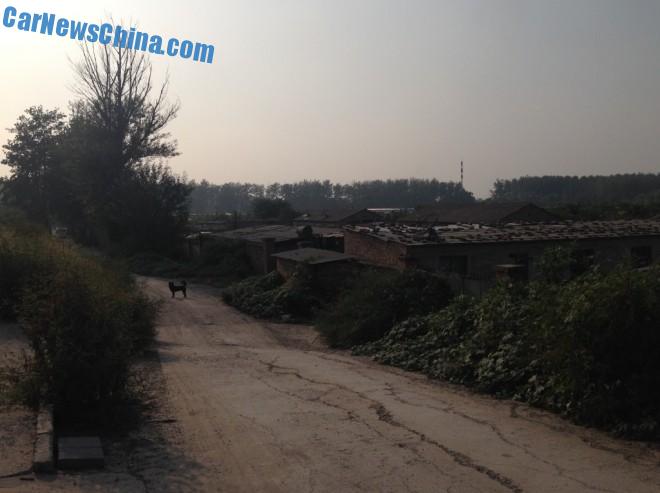 Road to nearby village. No people. Dog barking. Time to move out. 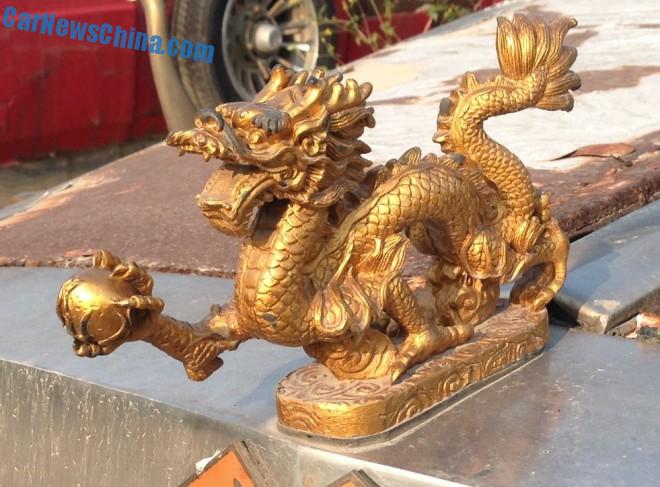