Tesla China has a Record Unsold Inventory of 2301 cars 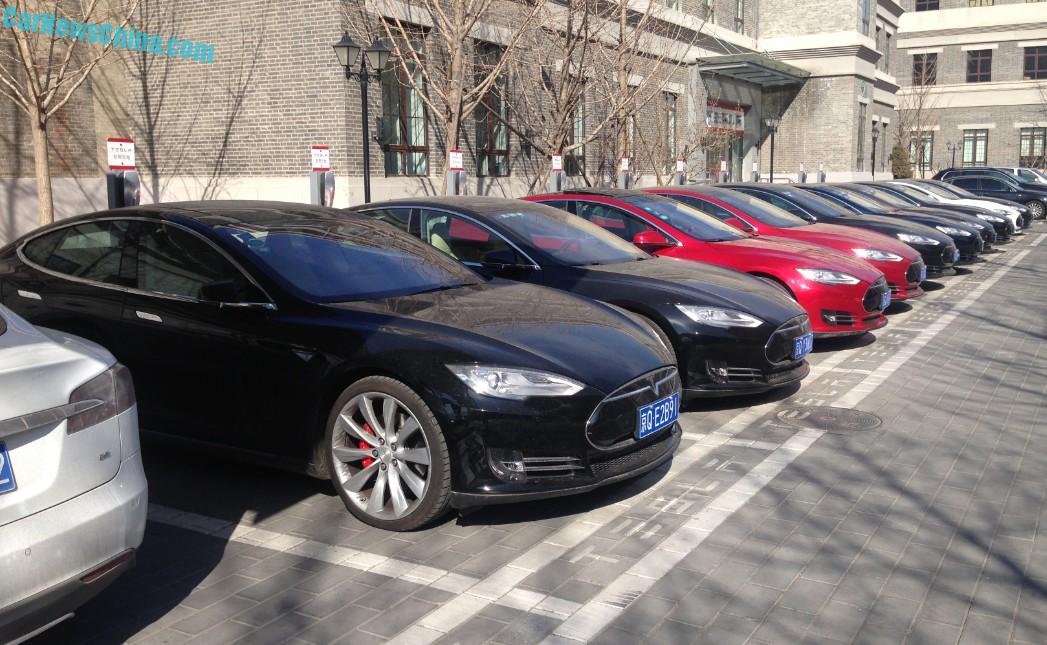 And one for the secretary. A long line of Model S in front of Tesla’s China headquarters.

It is the first time that the exact 2014 sales number for Tesla in China has been revealed, 2499 accounts for 208.25 cars a month. The numbers have been confirmed by various Tesla employees and ‘insiders’, speaking anonymously to said media.

Why did Tesla ship so many cars to China, and where are they now?

An anonymous source, quoted by Chinese media, says the huge inventory is partly caused by the many cancellations of orders by Chinese buyers. The cancellations went up in October last year after Tesla announced the new P85D, with many customers cancelling their original order and going for the D instead. But in many cases, still according to the same source, their original-ordered cars were already shipped and underway.

Normally, a deposit prevents most cancellations. But not in China. Officially, Tesla China used a two-phase deposit system: 15.000 yuan ($2394) when the car was ordered and 250.000 yuan ($39.920) when the car was ready to be shipped to China. In reality however Tesla China only collected the first deposit, with another anonymous ‘Tesla insider’ saying that collecting the second deposit was “too difficult”. This lenient policy caused a lot of cancellations.

Late last year Tesla’s U.S. headquarters found out about the cancellations and decided to upper the deposit on order to 50.000 yuan, while leaving the second deposit unchanged. The decision to raise the deposit was made in the U.S. without any consultation with Tesla China, according to sources from within the company, who also say Tesla China warned against the raise.

And Tesla China appears to have been right. The higher deposit caused an immediate drop in sales in late 2014 as potential buyers considered 50.000 yuan as far too much. The drop continued in 2015 with only 120 cars sold in January.

It is unknown how many orders were cancelled exactly. Still, considering the 2014 monthly average sales of 208.25 cars and the fact that the 85D was announced only in October, it seems unlikely that the cancellations count for the whole 2301 car inventory. Another apparent reason was a too optimistic forecast of fleet sales, and cars that were ordered for stores that were scheduled to open, but didn’t.

Tesla China suggested two ways to deal with the unsold cars: 1) sell the inventory cars with a 20% discount. 2) use third-party sellers, such as large dealer groups, to get rid of the inventory, as Tesla still has very few stores in China.

Both suggestions were rejected out of hand by Tesla’s headquarters in the United States, again according to Chinese sources from within Tesla China. This led to unease and anger, with sources saying staff in China feels that they were not being taken seriously by Tesla in the U.S., with one employee describing the U.S. side as ‘stubborn’.

These feelings surfaced again earlier this month after Tesla CEO Elon Musk announced Tesla’s intention to cut one third of its staff in China. Anonymous employees called Musk  ”too authoritarian and too impatient” for the complicated Chinese market.

Back to the inventory. Where are the cars now?

Most of the cars are stored at a facility at the Port of Tianjin, which is the port of entry for almost all vehicles coming from the United States. A large number of cars is parked on a lot near the Tesla store in Pudong District in Shanghai.

About 170 to 200 (sources vary) cars are stored in a ‘warehouse’ in Beijing. The warehouse belongs to Lei Xingxing Automobile Corporation (web), the largest Mercedes-Benz dealer in the capital with eight large facilities all over town.

The whereabouts of the other cars are currently unknown.