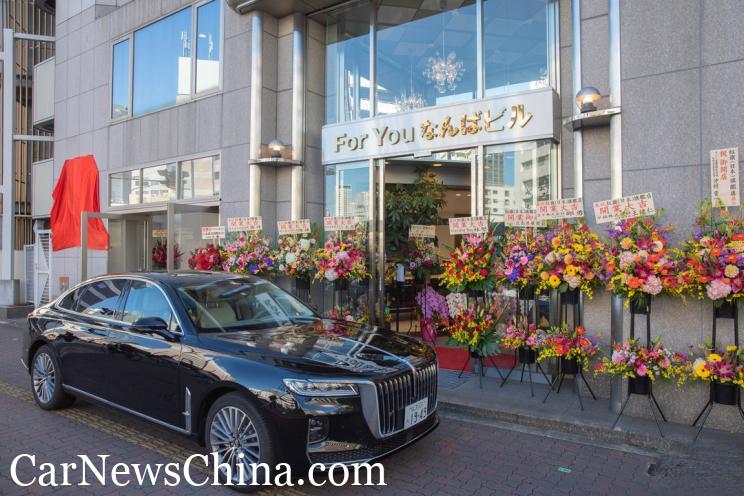 On December 19, luxury limousine carmaker Hongqi opened its Experience Center in Osaka. It is the first dealership of Chinese state-owned car manufacturer FAW Group in Japan. Hongqi is also known as “Chinese Roll Royce” and is famous for its long and massive limousines.

The center is located in Osaka’s Nanba district. There is an Hongqi H9 sedan on display on the showroom floor. The second floor is mainly for meeting rooms and accessories exhibitions. As a Chinese brand sedan, the Hongqi H9 model was released in the Chinese car market in August 2020 and is the latest sedan.

The new dealer will sell four types of cars, including a gas-electric hybrid vehicle (PHEV) for the time being. Next year, it will offer an additional five models of vehicles, including an electric sport utility vehicle. In 2022, the automaker will plan to open a dealership in Tokyo and discuss further development in other Japanese cities.

Hongqi is a premium car brand of China’s earliest state-owned automobile manufacturer, “FAW” established in 1953. The Hongqi in English means Red Flag, and the brand is perceived almost as patriotic. The automaker claims the Hongqi characters on some of its models are in Mao’s handwriting.

Besides H9, FAW Group plans to roll out a hybrid version of the sport utility vehicle in Japan under the Hongqi brand next summer. This electric SUV is expected to cost at least 11 million yen ($96,700) excluding tax, offers a single-charge cruising range of up to 690 km. It is a flagship model that is also being exported to Europe.

It is reported that the car will be exported from a factory in China, with the body modified to comply with Japanese charging standards. FAW Group is also considering selling a new luxury EV in Japan after the SUV launch.