Lotus Eletre SUV Unveiled With Lidars Inside Wheels. To Be Built In Wuhan 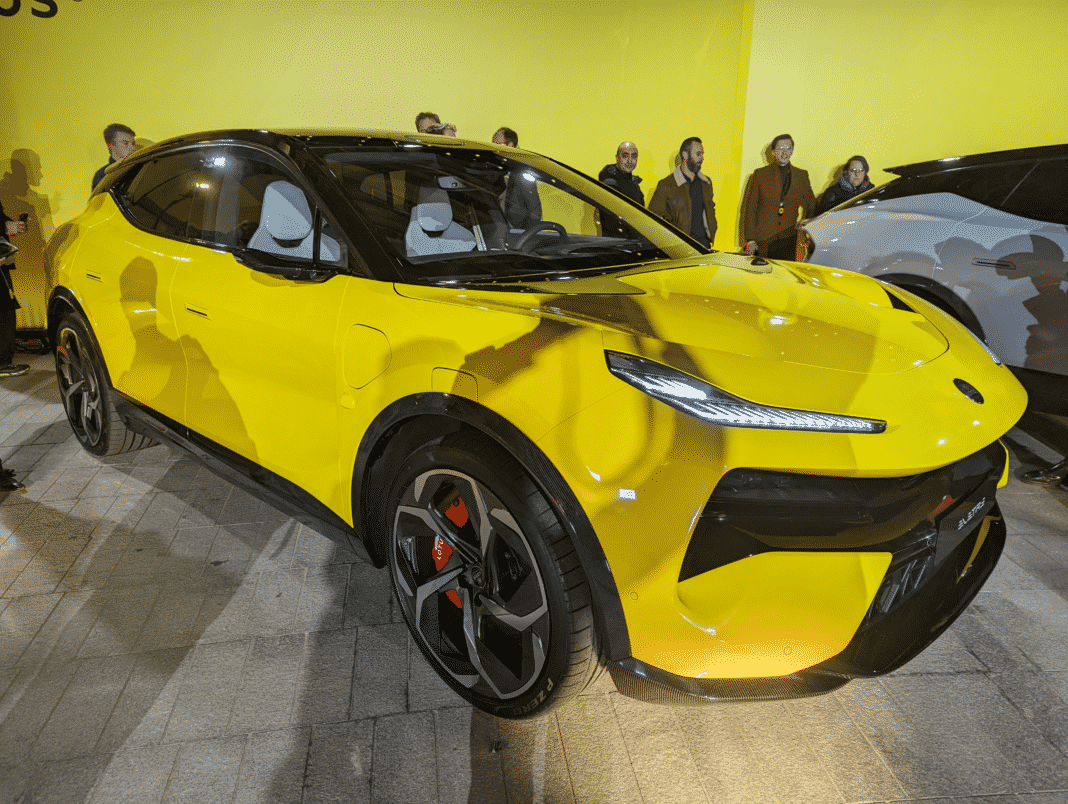 Lotus Eletre was officially unveiled in London. Although images of this electric SUV leaked just a few hours before its first debut, Lotus managed to impress us by sharing various exciting features of the Eletre. The production of this vehicle will start in H2 2022 at the all-new production facility in Wuhan, China. As for the price, it will be revealed somewhere in September. So let’s get acquainted with Eletre.

We will crack on with the size of the Lotus Eletre. It is a full-size SUV with a coupe-like roofline and dimensions of 5103/2019/1630 mm with a wheelbase of 3019 mm. The Eletre’s size is close to the Tesla Model X’s dimensions. The Lotus SUV is 9 mm longer, 64 mm narrower, and 4 mm higher than the Model X.

We summed it up in a previous article about the Eletre that it looks incredibly sporty and aggressive. But now there is more information about the features of the Lotus SUV. For example, the Eletre got the deployable LIDAR sensors hidden on the top of the windscreen, on the top of the rear glass, and in the front wheel arches. When needed, these sensors deploy to make sure the driver is safe.

Another thing everybody has been speaking about is aerodynamics. Lotus shared that Eletre got an active front grille that remains closed when the car is off or the driver wants to reduce drag during driving. There is a floating split roof spoiler on the back made of carbon fiber. Moreover, there is an active spoiler on the back of the Eletre. Other features include pop-out door handles and door-mounted cameras. The aerodynamic design of this SUV offers a significant downforce of 110 kg on the front part and 80 kg on the rear.

During the official premiere of the Eletre, it was shown in two colors: yellow and gray. And besides, there are five more colors, including green, beige, red, black, and a quirky mix of white and pink. You can also choose the rims’ color (285/35 R23) and brake calipers.

There is one more 9-inch screen for passengers on the second row, which can rise. The center tunnel has a wireless charging pad and two cup holders. The Eletre’s interior got 15 speakers from the KEF brand with a power of 1380 W. There is also an upgraded version with 23 speakers for 2160 W.

The interior has a lot of different materials and textures. In addition, there are six interior colors: black, grey, white, green, red, and brown.

We have already mentioned the Eletre got four LIDAR sensors. In addition, there are 6 millimeter-wave radars, 12 ultrasonic radars, and 11 cameras. The system is powered by two of Qualcomm’s 8155 chips. As a result, its overall computing power will reach 2.2 GFLOPS. The Eletre got a smart collision avoidance system with this hardware on board.

Based on Geely’s SEA platform (The Sustainable Experience Architecture platform), Lotus has developed the EPA (Electric Premium Architecture) platform. The entry-level model has 592 hp, and the top speed is 257km/h within 3 seconds of zero-to-hundred acceleration. As for the top-performance Eletre version, it got 690 hp. We also know this full-size SUV will reach 200 km/h in 12 seconds. The top speed of the Eletre is 260 km/h.

The battery of the first Lotus SUV has a capacity of 100 kWh. As for the range, it is 600 km (WLTP). With 800V charging technology, the Eletre can gain 120 km of range in 5 minutes and fully charge within 18 minutes.

The production of the Eletre will start in H2 2022 at the Lotus plant in Wuhan, China. The price of the car will be unveiled in September. Deliveries will begin in China, the UK, and Europe in 2023.