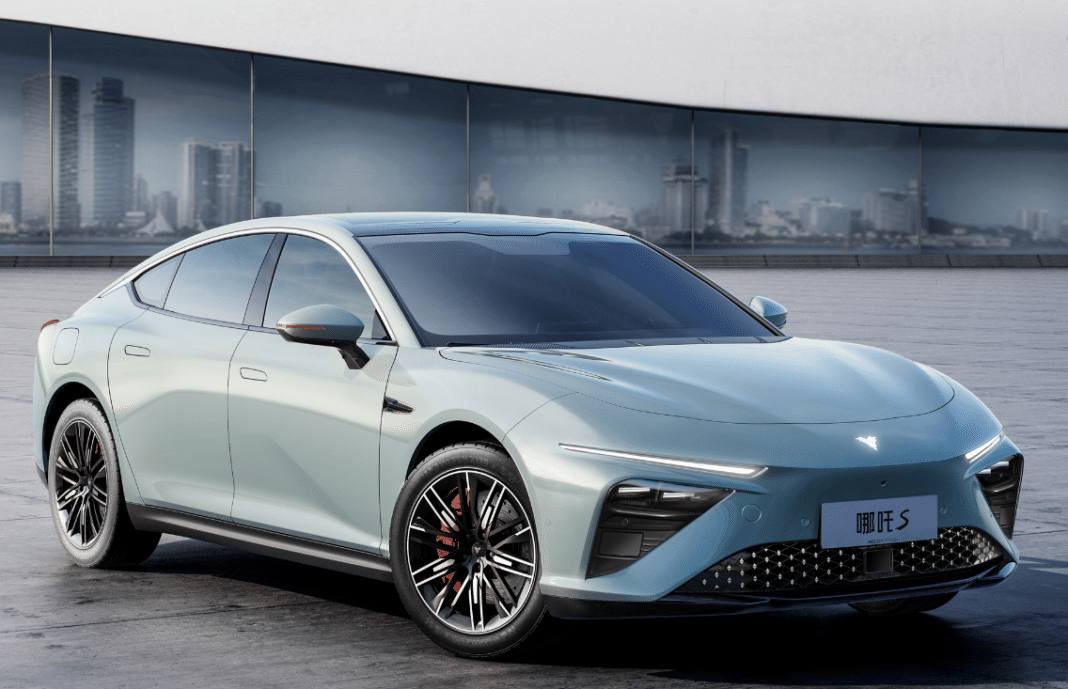 Hozon Auto has released more images and details of their upcoming NEV sedan, the Neta S, which looks stunning.

Based on Hozon’s ‘Shanhai’ platform (Shanhai 山海, not Shanghai 上海), the real thing is little changed from the concept with the same ‘cat’s whiskers’ running lights above headlamp units embedded within edgy triangular intakes.

A wider, lower intake with ‘diamond-grille’ treatment adds extra menace, as do power bulges on the bonnet.

Down the side, the S keeps things simple with just a short upward crease behind the front wheel. The body shape bears a passing resemblance to the P7 and Tesla Model S but looks lighter and more agile in comparison.

At the rear, the Neta S looks purposeful and taut. A full-width lightbar with flared ends is the statement piece and gives the Neta S broad shoulders.

A subtle ducktail spoiler, sculpted trunk, and mock diffuser below the rear bumper give off a sporty vibe and a fastback rear end.

While the narrow rear window suggests that rearward visibility might not be excellent, the cabin benefits from a full-length glass roof.

Luxury Vibes All Round

Inside, the Neta S is a plush place to be with leather, Alcantara, and woodgrain featuring heavily.

Geometric patterns feature on the light grey-shouldered seats and mahogany elements, along with steel and turquoise accents and a gloss black center console.

The front seats will be 6- and 12-way adjustable for driver and passenger, with heating, ventilation, and massage functions also included.

Facing forwards, a colossal portrait touchscreen takes pride of place in the center of the dashboard. On the passenger side, a smaller, widescreen display enables personal entertainment for the occupant.

These images, though not 100% revealing, appear to show that the driver gets a smaller screen behind the steering wheel with most information instead conveyed using a large heads-up display.

At least two speakers are visible in each door and are reportedly part of a mammoth 21-speaker system with a maximum output of 1216W. Front occupants can listen to independent sounds courtesy of twin speakers in the front headrests, a growing trend in Chinese cars. Four more speakers are mounted on the roof, another four elsewhere in the cabin, and a subwoofer resides in the boot.

Hozon says the Neta S will be made available in both BEV and EREV forms but doesn’t provide any details on the power or battery size.

They have previously claimed the extended-range version will have up to 1100km of range, and the pure electric version should achieve 710km, both using NEDC figures.

Information on the Neta S webpage claims that the Shanhai platform the Neta S sits on enables wheelbases of between 2750mm and 3100mm, plus the flexibility to run in front-, rear-, or four-wheel drive. It’s also compatible with SUV, sedan, MPV, and coupe body shapes.

They also claim that the electric motor used in the S will be more than 92% efficient with a power consumption of as little as 12kWh per 100km, which would make it 33% more efficient than Nio claims for its ET7.

While the production images don’t show the Lidar set-up above the windscreen that is featured on the show car, it’s expected the car should feature 13 cameras, 12 ultrasonic radars, 5 automotive millimeter-wave radars, and 2 Lidar sensors, eventually enabling up to Level 4 autonomous driving.